I love looking at life from many points of view. That must be why I love the quirky and the unique. I believe in UFOs, ghosts, and that sometimes when things go bump in the night there really might be a monster (or an alien) under the bed.

People ask what I do when I’m not writing. When I have the time I love chatting with people and trying my hand at a few DIY projects around the house (especially when I come up with new ideas or designs).

They have females of their own but the males outnumber them. This means that many of the males, especially the warriors, will never have the opportunity to have a mate. The Alliance warriors are alpha males with dominant tendencies. They want females who are strong in public but submissive in private. Because of this they will only accept females from Earth who volunteer to be chosen.

Once accepted the Earth female is taken to the warrior’s starship and given six days to get to know him before they face the Mating Challenge, a three-day right of passage for a warrior and his mate. Its held on an Alliance World Ship in a dome that is a hostile environment occupied by dangerous predators. During the day they’ll be equal partners, fighting together to survive, but at night she’ll submit to him in The Mating Challenge.

The first book in the series is Wynter’s Warrior. 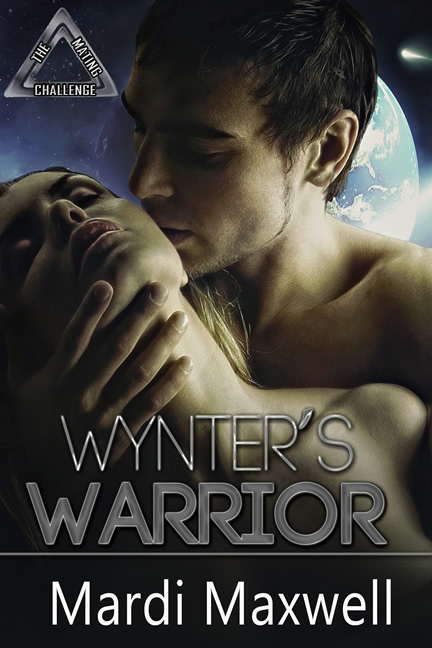 When aliens make their presence known to the population of Earth they bring the news of impending war with them. The enemy who destroyed their home planets is approaching Earth. Zaryq, the leader of the Za’Artha, is determined that his people survive and repopulate their ranks. They’ll share their advanced technology in return for the right to test human females for compatibility as mates.

Wynter Fields lives under the suffocating rule of two powerful political parents. She’s doomed to marry a man she despises, or risk the safety of the only person she loves. When Earth’s women are asked to volunteer for testing she hopes she’s found a way to escape. All she has to do is reach her destination unnoticed.

Nothing ever comes easy…….

Strong in public but willing in the bedroom, that’s the requirement to become an alien mate. But that isn’t all. A rite of passage…the Mating Challenge…must be conquered before the final mate ritual can be completed. With only six days to train with her warrior for the rigorous test ahead, tensions run high. If Wynter isn’t strong enough to survive the life threatening challenge, Zaryq will be forced to let her go. Losing the Mating Challenge is not an option.

Directly ahead of Wynter was a curving wall that left her with only two directions to go. She went left as she’d been told and followed the hall as it slanted up and around. At the top she stepped out into a large auditorium. The seats had been sectioned off into twenty separate areas with ten on one side and nine on the other. Her section was located right in the middle and while most of the areas were full only the first seven rows of her section had been filled.

Glancing toward the back where the room was in deep shadow she decided to sneak up there and hide in a dark corner. She’d just taken a step in that direction when a stream of warm air flowed over the back of her neck. Shivering she turned and came nose to bare chest with a man. Gasping, she stepped back and took up one of the self-defense positions she’d been taught.

On the defense, she examined him. An open vest crisscrossed over his chest and was tucked into a wide leather belt. The deep V-neck left his chest bare exposing the thick black lines of a tattoo that disappeared beneath the material. She studied the markings and his chest muscles for a moment, whispered a quiet, “Wow,” and looked up into his eyes. They were light gray with silver streaks that reflected the lights above them. He was not human, but alien. A warrior, in fact. Surprised she did what she always did and said the first thing that popped into her mind, “You shouldn’t sneak up on people. It startles them.”

He watched her mouth form the words. Those eyes on her lips seemed to radiate heat. She licked her lips, cooling them, and he tracked every stroke. He looked back into her eyes when she pressed them together. A perverse streak of curiosity made her question what he’d do if she licked her lips again. She followed through on the thought and his eyes dropped to her mouth again. She bit her bottom lip then released it and licked it. This time when his eyes met hers the silver streaks in his eyes were gone and they’d darkened until they were almost completely black. A feeling of having displeased him swept through her then as quickly as it had appeared it disappeared.

Her inner voice told her to run. She ignored it, braced herself and said, “This meeting is for women only. You shouldn’t be here.”

The corners of his lips twitched before he asked, “Can you make me leave?”

She swept her eyes over him, taking in the size of him, then shrugged. “Probably not.”

He took a step closer to her and pointed to her section. “Sit there.”

A shiver of arousal slid through her generated by the scent of his body and the sound of his voice. She moved closer and drew in a deep breath. He smelled of rain-swept air, cool grass and something unknown to her. The combination drew her to him and she found herself wanting to cuddle against him. She let her eyes drift half-way closed as she leaned toward him. He touched her waist and gave it a quick squeeze.

She jerked away, reminded herself how close she was to freedom, and said, “I want to sit up there.”

“No. There you will be alone and vulnerable to attack.”

She huffed out a laugh and looked around. “Who would attack me here?”

Instead of answering, he leaned over, sniffed her neck and then stroked her cheek with a long, callous-tipped finger. “Little Earthling, someday you will roar but this is not that day.”

His breath was warm on her bare skin. She shivered when he clasped her arm and gently tugged her around and led her toward the other women. At the last row of women, he stopped and turned her to face the row. “Sit and listen. These qualities are important in a warrior’s mate.” As soon as he finished speaking, he swatted her butt, once, hard.

“Ouch,” she squeaked and swiveled around to admonish him but he was gone, moving fast toward the bottom of the auditorium and disappearing through a door another warrior held open.

Several nearby women laughed and one asked her, “Did that hurt as much as it sounded like it did?”