I was born in historical Appomattox, Virginia. After graduating from high school, I joined the military and served five years in the active duty Army. After leaving, I decided to go into the Ohio Air National Guard where I retired as a Master Sergeant in 2011.

My love of writing began at a very young age. It wasn’t until after I watched Jane Austen’s Pride and Prejudice on A&E that I caught the fever to write more than a ten-page short-story. Currently, I have two contemporary romances, but my first love will always be historical romance.

When I’m not writing, I’m spending time with my husband and two boys, ages 13 and 10. Without their sacrifice and understanding, I would have never been able to pursue my passion of writing or my accomplishment of becoming a published author.

No matter what I write and read, there ALWAYS has to be a happy ending.

“Beautiful scenes and humorous moments will give us hope that IN MISTLETOE miracles can occur, but will they? More meat than some Holiday Romance reads, with tension running hot throughout! This one will take a piece of your heart!” Dianne, Goodreads Librarian

“All in all I absolutely loved this book. It is a perfect holiday romance for the season and I recommend it to all readers of the romance genre!” Book Club/Book Review Blog: https://www.goodbookswithtea.blogspot.com

“I kept telling myself I’d just read a few chapters until I found I was at the end of the book within a few hours. By the end I was hoping for just a few more pages, I didn’t want to say goodbye to these people.” https://emmbooks.wordpress.com 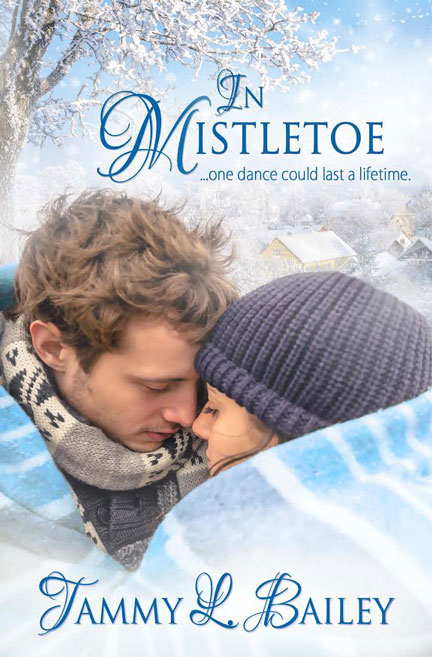 IN MISTLETOE by Tammy L. Bailey

At twenty-five, Grace Evans is steady picking up the pieces of everyone else’s life. So, when her younger sister decides to turn into a runaway bride just four weeks before the wedding, Grace, drops everything to chase after her and bring her back home. Only, when the trail leads Grace to Mistletoe, Washington, she finds herself at the mercy of the town’s most handsome and emotionally unavailable bachelor.

Ex-Army officer, Ayden McCabe, has three creeds in life: never make the first move, never fall in love, and never take anyone to Mistletoe’s Christmas Eve Eve Dance. Wanting nothing more than to keep his matchmaking sister from meddling in his personal life, he agrees to help Grace if she agrees to play his girlfriend. Too brunette and meek for his taste, Ayden believes Grace can’t tempt him enough to break any of his creeds. He could not be more wrong.

Yanked out of her reflection, Grace glanced up at Neil and followed his gaze to a man who stood about six-feet tall with wavy brown hair. She blinked, realizing the flyer did not do him justice. In person, he was dressed in a pair of Timberland boots, Levi jeans, and a blue and white flannel shirt under a rugged Sandstone jacket.

His shoulders were broad and masculine, as if they could withstand a hefty stack of 2x4s with little effort. He stepped forward, pausing only to rip the flyer off the post on his way by. She pressed her back against the leather cushion, finding his expression unreadable, his gait purposeful. He stopped a few inches from where she sat.

“Evans. Grace,” she said, surprised by his slight Irish accent and unfriendly tone.

She wondered what Neil had said to him to cause such a reaction. Then again, maybe the flyer had something to do with his curt introduction. Well, she didn’t care. Too much depended on her staying in Mistletoe, with or without Mr. Ayden McCabe rendering a smile or a pleasant hello. Too late for polite conversation, she stood.

“You could at least hear me out,” she said, straightening to appear taller, although she barely cleared the bottom of his chin. His face softened, but not enough for her to relax. Then the corners of his mouth lifted, and her pulse sputtered.