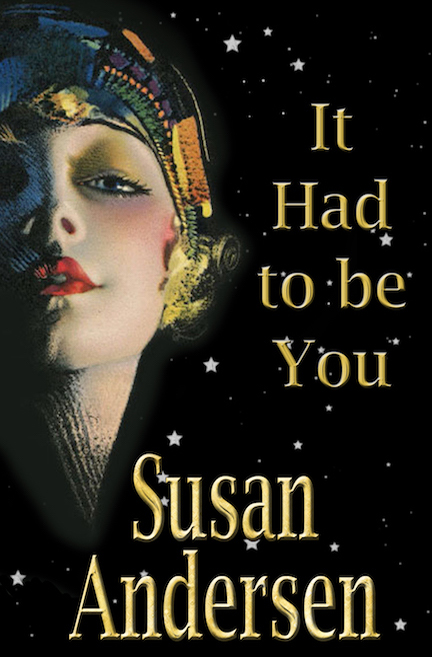 From Susan Andersen, NY Times bestselling author of contemporary romance and romantic suspense, a brand new historical romance set in 1920s Seattle–IT HAD TO BE YOU. Susan talks about writing in a different, and fascinating, genre.

Thanks for being here, Susan!

My name is Susan and I’m a bookaholic.

I became an author as a direct result of being an avid reader. I honestly don’t remember a time I didn’t have a book in my hand, and one day I just had to give writing one a try. This was by no means an immediate success—far from it, in fact, as it took me a long time to get published. But eventually I sold, and I have been a part of this business since 1989. I built my career in Contemporary Romance and Romantic Suspense. During the past several years, I’ve had this growing desire to write a book set in the 1920s. I love so much about the era: women coming into their own, post WWI, the cars, the clothes, the speakeasies. Just everything, really—except perhaps the gangsters. Hard to romanticize those guys.

I tried to ignore this new desire, because traditional publishing isn’t crazy about their authors changing genres when we’ve built our name in a different one, and I, unfortunately, am not a fast-enough writer to write two different genres for two different publishers in the same year. But the urge to see what I could do with this 1920s-set book was relentless. It kept scratching at the back of my brain until I finally decided I had to do something about it. When I completed my last contract, I retired from traditional publishing and finally wrote the book that wouldn’t stop whispering in my ear.

It Had To Be You just came out and I cannot lie, I am so thrilled. Writing was certainly different for this book than my usual way of doing things, however. As a contemporary writer, I of course researched. At the same time, there are so many things you simply know about the era you live in. I had to double check every single thing having to do with 1926 life in general and Seattle in particular. Did people use this particular expression then? Was this building even there yet? And perhaps because I set the book in my town, when I would go to look for a specific piece of information, I’d invariably find myself sucked into articles on the Seattle of that era. One day I looked up to discover I had lost 3 hours reading about stuff I had absolutely no use for in my story, simply because it was so darn fascinating. But, hey, knowledge is never wasted, yeah?  And a definite side benefit was discovering Seattle was still pretty small town in those days, so didn’t attract gangsters to the Emerald City like they had in Chicago and New York. Turns out, they probably missed out on a good thing. Smuggling real booze (as opposed to the rot-gut bathtub variety) was relatively easy here, due to our proximity to Canada and our miles and miles of largely deserted coastlines.

But, enough about me. What about you? Do you have an era that speaks to you?

One Response to 1920s Seattle and Susan Andersen