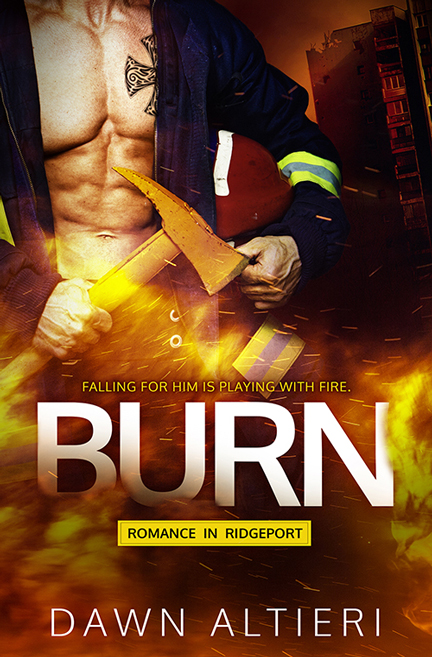 Firefighter Ryan Monroe wants a spot on the arson team, and getting close to Chloe might be the best way to solve his first investigation. Despite a painful past of his own, Ryan has dedicated himself to saving people, and when he realizes Chloe is in danger, she’s no exception. He just might be the perfect guy to rescue her, but their attraction could bring them both down in flames.

It’s cold outside! Time to cozy up by the fire. Grab your copy of Dawn Altieri’s BURN ~ a finalist for Best First Book in the 2017 NJ Romance Writers’ Golden Leaf Contest. Sign up for her newsletter at www.dawnaltieri.com for all the latest updates and receive the first four chapters of BURN as her gift to you! Chloe Addison is on the verge of a promising career in real estate development until an explosion destroys her first major project and casts suspicion on her in an arson investigation. Her career is suddenly at risk—and possibly her life.

Firefighter Ryan Monroe wants a spot on the arson team, and getting close to Chloe might be the best way to solve his first investigation. Despite a painful past of his own, Ryan has dedicated himself to saving people, and when he realizes Chloe is in danger, she’s no exception. He just might be the perfect guy to rescue her, but their attraction could bring them both down in flames.

“So, what’s going on?” Ryan asked. “You were there when the fire started?”

She nodded, stealing a quick glance at the adorably rugged man beside her. Despite his commanding presence, there was a distinct boyishness about him that almost set her at ease. He might need to show I.D. at O’Malley’s if he ever shaved that goatee off.

Still, her stomach churned. He was one of the firefighters. He could be trying to interrogate her. Yet something about him soothed her in a way she couldn’t explain, made her feel like she could trust him even though she wanted so badly to fight it.

“I’m a project manager at Toriello Development. Well,” she added with a deep sigh, “assistant project manager. We acquire properties for repurposing and resale to leasing corpora—” She stopped herself, knowing she’d slipped into corporate speak. “We renovate buildings and resell them.”

He chuckled before he took a swig of his beer. “I got it.”

“Sorry. I’m a little stressed.” She hung her head between her already drooping shoulders, hoping she hadn’t offended him. “That warehouse was going to be converted into condos and would’ve been my ticket to dropping ‘assistant’ from my title. But I had a meeting there with the contractors yesterday right before the fire started. I was the only one still there.”

He said nothing, simply nodded and watched as she fidgeted with the thin red straw in her drink.

“Arson,” Chloe said in disbelief. “I assumed it was an accident, maybe an electrical problem or something. I mean, the building is so old. I thought we’d be able to clean up and get right to work, but now the police are questioning me and I don’t even know if I still have a job.”

With a solemn nod, he set his empty beer bottle on the bar. He threw a glance at Jeremy and Lizzie, with their arms wrapped around each other as they swayed carelessly to a country ballad Lizzie had selected. “Well, since you rejected my suggestion of drinking till you pass out”—he stepped down off the bar stool and held out his hand—“dance with me.”

He took her hand, and even though his tug was gentle, her arm tensed. He glanced down to where their hands were joined. He’d felt it, too. “Come on. Your friend’s obviously not going anywhere for a while, so why not?”

She hopped down from her seat, and he walked backward, leading her to an area near the dartboard—clear of tables, though not quite a “dance floor.” He pulled her into a loose embrace, and her skin warmed at the firm hand curling over the small of her back, at the calloused fingers gently gripping her freshly manicured ones in the other.

He gazed down at her, still with that reassuring smile. “See? Not so bad,” he said. “I’ll have your mind off that crap in no time.”

She couldn’t fight the grin teasing her lips as she raised a hand to his shoulder, settling in a little closer. “You do this often? Dance with girls to help them get their minds off their problems? You really are a hero.”

“I do what I can.” He stepped back and twirled her underneath his arm before pulling her into him.

She laughed as her palm landed on the hard plane of his chest, and she quickly swept it to the side until it landed on his bicep. As if that was any less distracting. The guy was a solid wall of muscle.

She tipped an eyebrow. “Maybe a little.” Slowly, the tension drained from her shoulders.

He pulled her tighter to him, tucking their tangled hands between them against his chest, and whispered in her ear. “Only a little? Then I’m not doing my job.” A lifelong resident of northern New Jersey, Dawn Altieri has been scribbling stories practically since birth. After reaching a milestone birthday (she won’t say which one), she figured it was about time she took a shot at writing professionally.

With an overactive imagination and a slightly twisted mind, she enjoys reading dark and dangerous tales almost as much as writing them. When she’s not curled up on the sofa with her laptop, her latest story, a box of chocolates and a cup of tea (or a glass of wine, depending on the time of day), she can be found volunteering in the world of animal rescue. To keep a roof over her head, she works in the printing industry as a graphic production artist. She shares her home with her husband and daughter, and a menagerie of rescued fur-babies.