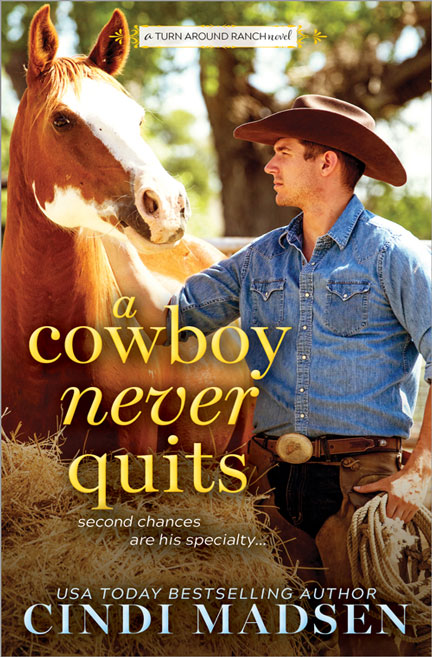 These hardworking cowboys give everyone a second chance…

When single mom Jessica Cook is at the end of her rope, she takes her 16-year-old daughter to Turn Around Ranch. The ranch has a great reputation for teen therapy, and Jessica prays there’s room there for her and Chloe. Wade Dawson’s first priority is to keep the ranch afloat to help teens and their families. But he can’t seem to keep his boundaries when it comes to Jessica—she’s talked her way into a job on the ranch so she can stay near her daughter and her tenacity and courage are truly impressive. Not to mention she’s a natural beauty and sparks fly whenever he’s in her vicinity… These hardworking cowboys give everyone a second chance…

When single mom Jessica Cook is at the end of her rope, she takes her 16-year-old daughter to Turn Around Ranch. The ranch has a great reputation for teen therapy, and Jessica prays there’s room there for her and Chloe.

Wade Dawson’s first priority is to keep the ranch afloat to help teens and their families. But he can’t seem to keep his boundaries when it comes to Jessica—she’s talked her way into a job on the ranch so she can stay near her daughter and her tenacity and courage are truly impressive. Not to mention she’s a natural beauty and sparks fly whenever he’s in her vicinity.

But as one crisis after another befalls the ranch, Wade is going to have to decide whether he can afford to let a woman get under his skin…

A hint of sympathy flickered through Gruff-and-Grumpy’s eyes, but then the firmness crept back in. He reached up and readjusted his cowboy hat, which set off some kind of wave that made the other two brothers do the same.

Seriously, why do they have to look like they belong on the cover of Ride a Cowboy Weekly?

Wait. That sounded dirtier than she meant it. Not that she’d exactly take it back.

They practically dripped masculinity, their bodies speaking to hours of manual labor, and the effect kept hijacking her jumbled thoughts. It’d been so long since she’d more than half-heartedly checked out a guy that apparently now she couldn’t even handle being in the presence of handsome men.

Back when she was in her early twenties—before guys discovered she came with baggage and a five-year-old—she used to be fairly decent at flirting her way into getting a guy to help her out with things like clearing that late fee or giving her a few more weeks on the rent. Once she’d even talked her disgruntled landlord into mowing the overgrown lawn he was harping on and on about. Clearly, she’d lost it, because the expressions aimed her way were immovable ones that conveyed disbelief in exceptions or wiggle room. Or the charity she’d shed her pride to ask for.

A spinster failure-of-a-mom at thirty-one. Well, it took fifteen years, but Mom was right. Just when she’d been so cocky about how much she’d accomplished. Now she wanted to Frisbee the employee-of-the month plaque she’d received from her boss last week, for all the good it did her.

“We’re sorry you drove all the way here only to have to turn back,” Mrs. Dawson said, tucking behind her ear the sandy-brown and gray strands of hair that’d fallen from her bun. The woman had a frail sense about her, her skinniness and the dark circles under her eyes speaking to a recent—or possibly even current—health issue. “I can give you some referrals, and I’ll see if my contacts know of a good counselor in your area.”

In a daze, Jess blinked at the woman, defeat weighing against her chest and tugging down her shoulders. She truly had failed. And curse her DNA for passing on traits she wished it would’ve held back. In a lot of ways, her daughter was too much like her: stubborn to a fault, blind when it came to guys, spurred on by the words no and can’t, and turning the word guideline into loose suggestion.

If they simply returned home, it’d be harder and harder to keep Chloe from bad influences. This past year she’d struggled to fit in at school, and her solution had been to find the worst possible group of “friends.” Friends who ditched and smoked pot and encouraged Chloe to sneak out at night so she could go meet a guy like Tyler. He was two years older and a whole mess of bad influences on his own. Rebellious, disrespectful, and mysterious—the same things Jessica had been attracted to at Chloe’s age.

Not that her daughter was blameless. Chloe had made plenty of bad choices. She’d dived fully into the party lifestyle, snuck out yet again, and gone on the joyride in the stolen car while under the influence. It was a slippery slope, which was why Jess wanted her at the best place in the state.

Even the others were out of her price range. A counselor might be as well. Maybe they’d just move to a different state entirely. Leave it all behind and eat…ramen. Get a nice box hut under a bridge. Really live out the scenarios people had thrown at her when she’d refused to give her baby up for adoption.

Feeling both levels of failure, Jess shakily stood. “Thank you for your time.”

“I’ll walk you out,” Gruff-and-Grumpy said, and she wanted to shout that she didn’t want chivalry. She wanted her daughter enrolled in their program and a way to pay for it.

“It’s fine. I’ve got it. Unless you’re scared I’ll just drive away without my kid, and then you’ll have to take her.”

“Well, I am now.” An almost-smile crossed his face.

She almost returned it, but her lungs constricted more and more as she walked toward the door.

There in the corner, she caught sight of a wall of flyers on a corkboard. Along with a schedule that outlined class time, equine therapy time, and a few other events she couldn’t quite make out, she saw a neon-yellow paper with the words Help Wanted across the top. Even better, it was for a job here at Turn Around Ranch.

“You guys are looking for a cook?” It was as if she’d stepped out of her body and someone else had taken control—someone crazy and reckless, personality traits she’d tried very hard to suppress through the years. When you had a kid who depended on you, impulsiveness went out the window, and recklessness wasn’t an option. Still, even as she told her mouth to hold up before it landed her in trouble, the next words were pushing from her lips. “You’re in luck. I just so happen to be one.”

Those dark eyebrows lowered again, only visible under the brim of his cowboy hat when he was giving the signature scowl he’d given her from the moment she’d stepped inside the office. “You’re a cook?”

“Oh, we’ve been looking for a cook for forever and a day,” Mrs. Dawson said, scooting to the edge of her chair.

Hope edged in desperation bobbed up inside Jess. She’d told her boss she needed some time off, and he’d been super understanding. He might not be as cool about her taking…a month? Two? Whatever. This was her daughter. Jobs came and went, but if she lost Chloe, she’d regret it forever. “Perhaps we could help each other out. If you let my daughter into your program, I’ll stay and cook while she’s here. The only other thing I need is a bed to sleep in. I’m not even picky as to where that bed is.”

“Under the stars, then?” the looming cowboy next to her said.

That almost-smile quivered his lips, but he tamped it down. Why was he so determined to keep up the steely front? Or maybe it wasn’t a front. Right now, she didn’t care, and since she clearly wasn’t going to get anywhere with him, she turned to Mrs. Dawson. “I can have a list of references to you within a matter of hours. My bosses all love me.” At least that was true. At one point she hadn’t known how to balance books or create databases, but she’d learned. Cooking had never been high on her priority list, but she could learn to do that as well. There were Google and the Food Network, and she could make a box of mac and cheese like nobody’s business. How hard could it be?

Cindi Madsen is a USA Today Bestselling author of contemporary romance and young adult novels. She sits at her computer every chance she gets, plotting, revising, and falling in love with her characters. Sometimes it makes her a crazy person. Without it, she’d be even crazier. She has way too many shoes, but can always find a reason to buy a new pretty pair, especially if they’re sparkly, colorful, or super tall. She loves music, dancing, and wishes summer lasted all year long. She lives in Colorado (where summer is most definitely NOT all year long) with her husband and three children.