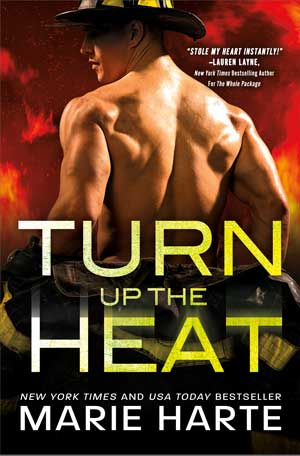 New Release! TURN UP THE HEAT by Marie Harte

She won at soccer. He won at pool. She’s a cop. He’s a firefighter. He lost a bet, and when it comes time to pay up, she ends up on top. A rivals to lovers romance between a hot firefighter and a sexy cop who refuses to lose…

Officer Cass Carmichael loves her job and does it well. Giving firefighter Mack Revere a speeding ticket after a warning was deserved. Knocking him off his feet in a soccer game? Beating him at darts, dominoes, and pool? Par for the course. Cass has always played to win. Yet when she fails to resist Mack’s kisses, she doesn’t mind losing.

Officer Cass Carmichael loves her job and does it well. Giving firefighter Mack Revere a speeding ticket after a warning was deserved. Knocking him off his feet in a soccer game? Beating him at darts, dominoes, and pool? Par for the course. Cass has always played to win. Yet when she fails to resist Mack’s kisses, she doesn’t mind losing.

Every time Cass sneers or jeers, Mack likes her a little bit more. For a firefighter, he’s a laid back guy in a profession that takes a lot of heart. Though he’s used to handling the heat, Cass makes him burn. But they both have concerns about their families and their futures, and Mack and Cass will need to decide if they should fan the flames between them or douse what might have been before one of them gets burned.

Mack Revere wanted to believe that the woman had hit him by accident. He couldn’t chalk up the incident to alcohol, a joke gone wrong, or the fact he’d been flaunting the rules. He hadn’t. For once, he’d been playing clean and fair.

Yeah, and look where that got you.

Winded and flat on his back, he blinked up at the clear November sky. Seattle remained cloudless yet cold. The forecast predicted clear skies for the next week, but with the way the weather could turn on a dime, he hadn’t put aside his umbrella just yet. Too bad the rain from the past week had turned the soccer field into a mud bowl.

He grimaced as the cold, wet muck seeped into the back of his jersey and shorts. Ew. Talk about a wet start to his Saturday morning.

A head interrupted his field of vision. Bright gray eyes dominated an unforgiving face that smirked down at him. A dark ponytail swung over the woman’s shoulder as she tilted her head, studying him like a cockroach. Police officer Cassandra Carmichael, in the flesh.

She stared. “That tumble you took must have hurt.”

“Ya think?” he snarled, trying to ignore the ache in his tailbone. Her slide tackle had done most of the work, but the mud sure the hell hadn’t helped. “Totally unnecessary.”

“Yet we have the ball, so maybe it was necessary.” She glanced over at her teammate, who kicked a goal, then turned back to him and shook her head. “No wonder your team is losing. If they’re smart, they’ll move you from midfield to offense. Put you out where the ball isn’t.”

Before he could say something cutting, witty, and God-willing sarcastic, she flounced away to congratulate her teammates.

He wanted to grab her by that ponytail and roll her around in the mud. Then, maybe, the ref would call a timeout for a mud-fight. Everyone would get involved. Carmichael would get wet and dirty. Oh, so dirty. Then she’d have to take off that nasty uniform to showcase that tight, toned body…

He glanced over at her. She didn’t look back, completely ignoring him. Or maybe she’d forgotten she’d nearly broken him on the soccer field.

So much for a family-friendly game.

“I could use a little help here,” he yelled out to her, annoyed to still be so attracted to the woman who just a week ago had given him a speeding ticket. Well, a warning, but still.

“Sorry, can’t,” she yelled back without looking at him and said something he couldn’t make out that caused her nearest teammates to laugh.

“You don’t sound sorry,” he muttered and flipped off her buddies, who promptly sneered and sent the gesture right on back.

The bastards. He absolutely loathed playing against the Top Cops, no matter what the sport.

Tex, fellow firefighter, teammate, and one of Mack’s best friends, helped him to his feet.

“She did that on purpose,” Mack said.

“Of course she did. Duh.” Tex raised a brow, his Texan accent thick as he responded, “If your brains were leather, you wouldn’t have enough to saddle a junebug.”

“What the hell does that mean?”

“Well, my uncle likes to say it every now and again to the stupid cousin everyone hates.”

But Tex had already turned to yell, “Nice illegal tackle, officer.” To Mack he said, “Gotta say though, that tackle was totally bitchy. She added an evil laugh there at the end.”

“Agreed.” Mack wiped gobs of mud from his legs and backside and glared at the woman who should have been penalized with a red card. Or at least a yellow warning. He raised his voice, “Maybe if the refs would quit leering at a certain someone they’d make the right call!”

The tall referee who couldn’t seem to take his gaze from Carmichael’s ass ignored him.

“I feel for you.” Tex shook his head. “Our fans are giving you a pity clap just for standing up.”

Mack glanced to the stands to see Tex was right. A thumbs-up from Tex’s girlfriend. And a “You can do it, Mack!” from… Oh God. His mother.

Mack seethed with embarrassment. For all of five seconds. Then he decided to get even.

On the Top Cops’ next breakaway down the field, Mack switched with the left halfback. “I got this.” He proceeded to steal the ball from one of the Top Cops’ lead scorers and sent it downfield to Tex.

Mack waited until the refs turned away before shoving him aside. Talk about annoying.

Mack dodged when the guy took a half-hearted swing at him. Which brought several comments from the stands. Protests from the Burning Embers’ fans and cheers from the Top Cops’ side.

“You can do it, Mack!” Their mother frowned. “Xavier, be nice to your brother.”

Xavier smiled wide. “Sure thing, Ma.” Then he punched Mack in the arm.

Mack frowned, punched him back, and narrowly avoided a soccer ball to the face. Xavier wasn’t so lucky. He took the ball to the side of his head.

“Gee, that must have hurt.” Mack grinned at his brother swearing and shaking his head, no doubt to clear the ringing between his ears.

Mack chuckled, took the ball, and dribbled down the field. He pretended to pass to the center and juked Carmichael into tripping over her own feet. She went down in the mud.

Still laughing, Mack yelled over his shoulder, “Officer down!”

He passed to an open player and cheered his delight when their team scored, evening the game.

Turning, he found himself surrounded by muddy, burly police officers, Carmichael among them.

“That was cheap,” she argued.

“Was it the ‘officer down’ part, or the part when you fell over your own feet? And wow, are you dirty.”

Out of the corner of his eye he saw one of the cops grab a handful of mud. Mack ducked behind Carmichael just as the guy slung it. He heard her gasp and saw she’d been hit in the chest. And what a sorry sight that was, obscuring anything so fine.

She glared at the offender, who startled whistling and quickly walked away.

Deciding that would be the smart move, Mack followed. But not before his brother tackled him to the ground and shoved his face in wet dirt and grass.

Mack retaliated. The rest of his team joined him, and the soccer game turned into a real free for all. Laughter, swearing, and a lot of mudslinging went both ways. Unfortunately, both teams ended up being disqualified for unsportsmanlike behavior—but only because some smartass had decked both refs with mud as well. 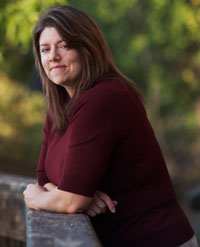