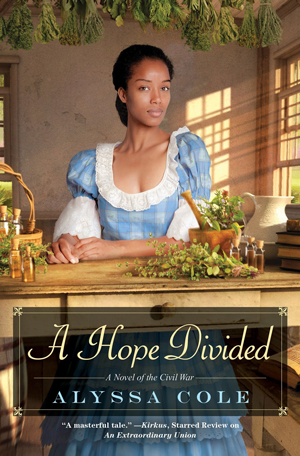 A HOPE DIVIDED by Alyssa Cole radiates intelligence, human frailties and endurance in a tightly woven package of realistic historical adventure and love.

Marlie Lynch didn’t learn about her family history from her mother, a freed slave and healer, until Marlie’s white half-sister Sarah shows up at their doorstep. Marlie’s mother, Vivienne, teaches her everything she knows about healing during their years together. It’s Marlie’s turn to benefit from what is her due, now that her slave-owner father has passed on. Half-sister Sarah takes Marlie home with her to profit from what a white family can provide. This is what Vivienne wants, more for her daughter than she can give her. But will the trials of a civil war end all their dreams of a bright future? Ewan McCall has served the Union by being the worst human that war can invent. He is not ashamed of what he has done for his country, nor the freedom they’re earning for those enslaved. He meets Marlie at the prison where he resides when she provides healing and a book cart for the prisoners. The very same books are where they hide letters going out to the prisoners’ families. Sarah and Marlie are in deeper than the prison officials know, but Ewan hazards a guess and makes good on his knowledge when he escapes.

Ewan comes off as crazy as crazy gets in the beginning of this novel. I was so curious about how the author would redeem him. He’s a scary man in relation to what he’s done for their cause, but Marlie brings out the compassionate human beneath his war-torn heart. To say that Ewan is creepy and mysterious is spot on. Marlie is sweetness and light. Putting the two together is brilliant. It’s like how music soothes the savage beast. Marlie is the calm for Ewan. And for those who look for this character trait, Ewan is a redhead.

As a fan of thrillers, I was intrigued that this book reads very much like that style of story. There are bits of Ewan’s background that easily sent chills up my spine. Marlie is such a sad character because she was separated from her mother and the only life she knew, then placed with a white family she doesn’t know in a world of turmoil. I understand her mother’s reasoning, but Marlie has “the sight,” and the girl had to be terrified when the exchange took place. The fact that she retained that sweetness and light that Ewan sees is a miracle.

I found Marlie’s healer details fascinating. Marlie considers herself a scientist, and her distillation process was a surprise. I’ve read many books about healers, have studied plants for more years than I care to admit, and this is the first story I’ve read with this wonderful descriptive element. If you’re an herbalist by passion, whether you use plants medicinally or for flavor, you’ll really appreciate this story. I must reread this book again, if only for that joy it gives the herbalist and historian inside me.

The big caveat? Sweet, unassuming Marlie, the wannabe scientist and woman of color, who is extremely smart, is a decoder for the Loyal League and part of the Underground Railroad with Sarah. All these influences put together make Marlie one of the most unusual and fascinating heroines I’ve had the pleasure of reading about. She may not be as dominant as Elle from AN EXTRAORDINARY UNION, book one of THE LOYAL LEAGUE series, but Marlie is formidable for using her mind that’s sharp enough to attract Ewan. I loved their method of book discussion through notes passed in the books Ewan borrows from the book cart while in prison. The fact that Ewan is such a philosopher was equally entertaining.

When her white half-brother shows up with his very southern belle of a wife, Marlie experiences the same terror she had when she was torn from her mother’s home. Her life of equality at her southern home is no longer viable. She’s just like any other slave in the eyes of Melody Lynch. All the former slaves in this household are freed and paid a wage for their service. How can any of them withstand life with the insufferable, spoiled brat who has decided she’s the lady of the manor?

This is just the beginning of the first three chapters. What comes next is both expected and unexpected. It doesn’t matter, because the story is such high quality that I couldn’t stop devouring it the first and the second time I read this book. The villain is a nasty piece of work. He’s connected to Ewan’s past, so the mystery builds when Ewan is reunited with Marlie.

So much is to be appreciated from Alyssa Cole’s talent. Even the simple things like learning new words such as “manumit” have made me a huge fan of her work. Her women of color are strong and eloquent with a fire inside them. Such a joy to read. This is the historical fiction from the American Civil War I’ve craved, and had no idea what I was missing until now.

It’s like Alyssa Cole took everything I love to read and mixed it with everything I’ve always wanted in an American Civil War historical novel. Such intelligence threaded through, making it all cohesive. I can’t even fathom what it took to pull this magic together to become this beautiful book. Either the author is a genius, or she can research and organize beyond comprehension with the aid of the best editors in the world.

It’s very clever how other books were interwoven into A HOPE DIVIDED – giving Marlie and Ewan a chance to discuss what they’re read. And they’re not simple discussions, either. They’re often philosophical. After every chapter I sat in wonder, because it’s unlike anything I’ve experienced in fiction. So much so that I had to read it twice, and then I was even more amazed the second time through. There’s so much valuable content crammed into a small number of pages that it might appear overwhelming. But, it’s not. It’s just never boring. I’m betting a third reading will happen in my future and that’s extremely rare for me.

I’m not normally a fan of quotations from other books inside a novel I’m reading. Especially if I haven’t read the book being quoted. To me that feels almost like it’s taken out of context, because I really don’t get the meaning when it’s in pieces-parts like that. That means it’s high praise to say I love the way Alyssa Cole inserted quotes from other books for her characters to discuss. It’s especially revealing for Ewan’s temperament. It explains a lot about where he went wrong and how he is such a stand-up guy after the reader discovers his past. I can’t figure out how the author made him so redeemable, but she did, and it fascinated me.

A HOPE DIVIDED by Alyssa Cole reads like a thriller when the layers are revealed in her exquisite storytelling style. Historical fiction lovers should read both books currently in THE LOYAL LEAGUE series. They’re beyond description on my part. With everything I’ve craved and never found, I’m no longer bored with historical romance, now that I have Alyssa Cole to keep me perplexed, anxious, thoughtful, and thoroughly entertained. I need book three, AN UNCONDITIONAL FREEDOM, right now, but we must wait until October 2018 for its release. It’s going to be a looooong wait!

A Recommended Read as the most intelligent novel I’ve read!

Don’t miss book one, AN EXTRAORDINARY UNION, also reviewed by me at Romance Junkies.