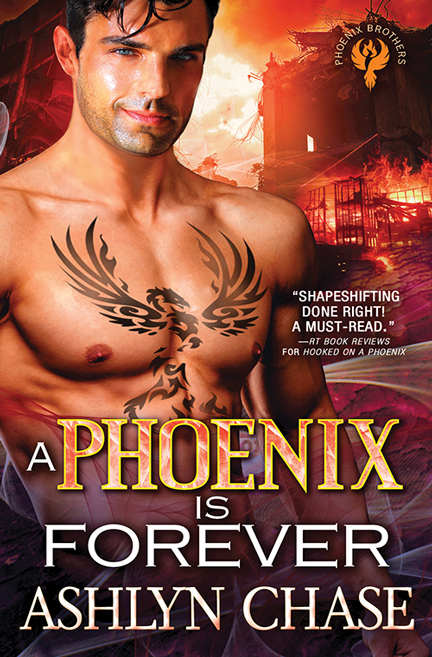 In Ashlyn Chase’s A PHOENIX IS FOREVER, Luca Fierro is a Phoenix shifter and rookie cop with something to prove. The last person he should tangle with is a newly reformed bad girl, especially one as irresistible as Dawn. But he needs her help to find a missing child, and every minute counts. This case is going to put their skills to the test and force them to keep their sizzling attraction at bay… Dawn Forrest is ready for a big change. She’s determined to put her criminal past behind her and only use her extraordinary psychic abilities for good from now on.

Luca Fierro is a Phoenix shifter and rookie cop with something to prove. The last person he should tangle with is a newly reformed bad girl, especially one as irresistible as Dawn. But he needs her help to find a missing child, and every minute counts. This case is going to put their skills to the test and force them to keep their sizzling attraction at bay…

She stepped outside and spotted Luca waving from his car. She strode to it briskly and got in.

“Thanks for meeting me. I need your help.”

“A missing child. You can’t tell anyone else, or it could mess up the investigation.”

Her eyes widened. “Oh no. A missing kid? That’s awful. Boy or girl? How old?”

“A four-­year-­old girl, and there are no leads. We’re trying to find her quickly, before anything worse happens. You can’t tell anyone.”

“I wouldn’t know who to tell, except maybe the cops. But—­oh wait, here you are.”

He smiled at her joke.

“Do you have anything that belongs to her?” Dawn asked.

“No. The detectives would have that stuff. But I’m afraid they won’t consult a psychic.”

“Yeah, I doubt that too, but I need something to go on. Just some way to latch onto her energy.” And, hopefully, see out of her eyes.

“Would it help if you saw her home from the outside?”

“Maybe. Do you know where she lives?”

“She’s actually sort of a neighbor. Her place is around the corner from where I live, but I don’t know the family well.”

“This may be tricky. I can’t be seen at or near the house. It might look like I’m interfering with someone else’s investigation.”

“Isn’t that exactly what you’re doing?”

“When you consider the first priority is preserving life, I don’t really have a choice. I just have to be careful not to compromise the case. If someone took her and procedure isn’t followed, no matter how guilty he is, the perp could walk away unpunished. That’s the last thing anyone wants. For someone like that to be free to do it again would be a crime in itself.”

“I get it.” Dawn understood what he was saying, and she even knew some people who had gotten off on a technicality—­Ice Spider, for one—­but it seemed cumbersome to follow procedure when a child’s life was at stake.

Luca drove her to his house and gave her the Richardsons’ address around the corner. Dawn couldn’t help but stare at the outside of Luca’s home. The neighborhood was definitely upscale and a far cry from her run-­down area. The four-­story brick building had beautiful wrought iron railings and sconces on either side of the large front door. Clearly, his parents had done well. Or they’d inherited a fortune.

“Remember, don’t look conspicuous,” Luca said as Dawn got out of the car. “The forensics team could still be there gathering evidence.”

Dawn nodded and tucked some loose wisps of her punk pixie hair behind her ears. Not that that would make a difference. They had decided while she was doing her psychic thing outside the missing girl’s house, Luca would change and meet up with her at the Starbucks two blocks away in about half an hour. Dawn had no idea how long it would take, but half an hour would be plenty of time for her to try to get some vibes about the little girl.

Luca was tired, but he imagined the detectives on this case weren’t getting much sleep either. Dawn had said she needed something that belonged to the girl. Maybe he could transform again early tomorrow morning after his shift, search for an open window, and fly in to grab something from the girl’s room. The Richardson family had been renting the upstairs apartment of the old Bixby home. The owners had passed away a few years back, and their kids had turned the massive house into three separate apartments. Smart move.

Even though Luca’s dad had inherited their brownstone from his grandfather, who’d inherited it from his great-­grandfather, Antonio complained that the taxes were like paying a mortgage that never ended. Phoenixes could live to be five hundred years old but not in the same place. People got suspicious eventually, so after a good number of years, the house was passed on to the next generation.

Luca hoped Dawn could glean something from the facade of the residence itself—­also without attracting attention. Chances were the detectives had gathered many of the little girl’s things, but if he could fly in and grab a T-­shirt or a toy that could be helpful to Dawn, he’d have to be careful not to be seen. A bird flying around with a stuffed animal in its beak would look pretty weird. Besides, the detectives probably took her favorite toys and recently worn clothing for the K-­9 unit to sniff.

Luca wished he could share his shape-­shifting ability with Dawn. She’d probably understand, right? One weirdo to another. But the stakes were too high. He’d never even told Lisa about it. Now, he was glad he hadn’t. Her father would probably have him committed to the state hospital.

He jogged up the steps to his home and let himself in.

“Luca! I was getting worried,” his mother greeted him. “How was your night, honey?”

“Good, Ma, but I’m on my way out again. I just have to change clothes.”

Gabriella leaned back and studied his face. “So soon? Aren’t you exhausted?”

“Not really. I got a second wind.”

She tipped her head. “Well, I hope you get some rest before you get the wind knocked out of you.”

“I will.” Despite wanting to protest her fretfulness, he kissed her cheek. Then he jogged downstairs to his bedroom in the finished basement.

GIVEAWAY
5 copies of Hooked on a Phoenix

Award winning author, Ashlyn Chase specializes in characters who reinvent themselves, having reinvented herself numerous times. With a degree in behavioral sciences, she mainly worked as a psychiatric nurse and Red Cross RN. She’s happily married to her true-life hero husband who looks like Hugh Jackman if you squint. Visit her online at https://www.ashlynchase.com/

2 Responses to A Phoenix Is Forever by Ashlyn Chase