Hi! Thanks for asking me along to talk about how Halloween was celebrated during Jane Austen’s time, it’s a great subject to talk about. Halloween is still a popular festival in the UK, and I know it’s very popular in the US, too!

The history of Halloween goes right back to the druids in England, so it’s been going for thousands of years. It was originally known as Samhain, meaning “The End of Summer”. It celebrated the harvest as well as preparing for the winter, which is why a lot of the Halloween traditions are about death and renewal, and why they often use symbols of the harvest. It was a time when the veil between the dying year and the newly arriving one was thought to be very thin, hence the belief that it was a time for spirits to walk the earth and supernatural things to happen.

Making lanterns was a popular pastime for Halloween, but in Jane Austen’s time they were cut out of turnips or swede, which are hard root vegetables, and a lot smaller than pumpkins. Turnip lanterns are still made in England today, although they are slowly being overtaken by pumpkin lanterns because pumpkins are easier to cut. But there’s nothing like the smell of a swede or a turnip as the candles roast the inside of the vegetable!

Once the lanterns were made, people could get down to the serious business of catching a glimpse of their future spouse. There were all sorts of ways of seeing the face of the man or woman you were going to marry, for those brave enough to try.

One way was to go to a river and dip your left sleeve in, then hang your shirt by the fire, putting the left sleeve closest to it to dry. At some time during the night, the image of your future spouse was meant to come and turn the shirt, as if to dry the other sleeve.

Another way was to walk three times round a haystack, and on the last time you would supposedly see an image of your future spouse.

The fact that so many of the traditions revolve around finding a husband or wife shows just how important the subject was in Jane Austen’s time. After all, her books are about the same thing. 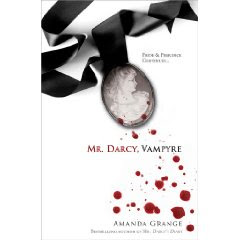 Elizabeth and Darcy have no need of these traditions in Mr Darcy, Vampyre, because they have already found each other, but Elizabeth has a close encounter with the supernatural at Halloween all the same. When she and Darcy stop for the night at a small tavern in the Alps, this is what happens:

Elizabeth went over to the window and prepared to close it, but her hand rested on the catch for a moment and she looked out over the tranquil, moonlit landscape. The lake was shining placidly in the silver light and, far off, trees were silhouetted against the white backdrop of the mountain. Hanging above it was a gibbous moon, phosphorescent in the darkness.

Her attention was attracted by movement close at hand and she saw the dark shape of a bird – no, a bat – heading towards the window. She closed it quickly, leaving the bat to hover outside. As she looked at it she was seized with a strange feeling. She thought how lonely it must feel, being shut out; being a part and yet not a part of the warmth and light within.

Then the bat turned and flew away and the moment was broken and she went back to the other side of the room, warming herself by the fire.

She returned to her own room, and to her astonishment she found him standing on the hearthrug. She had not heard his footsteps in the corridor, but her surprise quickly gave way to a sense of anticipation. He had come to her after all. She went closer and she felt the tension in him, as though he was trying to hold back some great force by sheer strength of will. She shivered, but not with cold. She could hear his shallow, uneven breathing, and he leaned towards her . . .

What kind of Halloween customs do you have in your area? I don’t suppose you will be dipping your sleeves in the river, but whatever you do, I hope you all have a wonderful Halloween.

6 Responses to A Regency Halloween