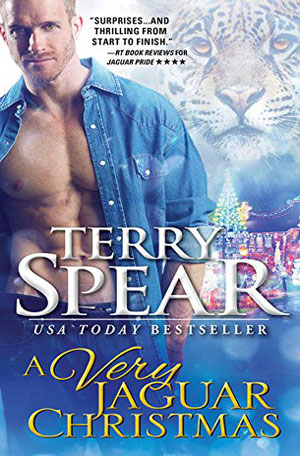 There are all kinds of surprises under the mistletoe!

As a protector of all jaguar-kind, Guardian agent Demetria MacFarlane isn’t surprised to get a call near Christmas—but when she’s sent to protect a cub whose species she didn’t even know existed, her holiday season gets complicated. And it doesn’t help that her partner is a distraction of the hottest kind.

What if the shifter world as you knew it suddenly changed?

That’s what happens in A Very Jaguar Christmas. Everyone, jaguars and wolves alike, were blissfully unaware of the others. And now with one little Arctic wolf pup deposited at a jaguar shifter daycare before Christmas, both their worlds collide.

Can you imagine that? I mean, it would be like if some hunky guy you were friends with suddenly turned out to be a wolf—more than just a wolfish guy, but really a part-time wolf! So they have to deal with not just knowing that wolf shifters exist, but that they have one of their little ones, and where does that leave them?

Jaguars are not pack animals, yet the momma takes care of her babies until they’re old enough to hunt on their own. I was just watching a video about cougars, and the myth that the daddy isn’t welcome anymore might be just that. It showed the momma in a den with her babies and daddy coming to join them! So it’s possible that jaguars are the same. They’re so elusive, it’s hard to say.

In any event, the human part of the equation usually makes the shifter just as family-oriented as the wolf packs. But there are differences. They don’t have the issue of the full moon to contend with, if they’re more newly turned.

It’s not just an adult issue, either. How will the pup feel about being with a bunch of big cats? And little cats too? How will the jaguar kits feel about this alien wolf pup in their daycare? What about protective mommas?

So I’m excited about showing their worlds come together, to see how they will relate, work together, or not. They do have the shifter issue in common, so they have common ground right from the start. And that’s important. But what about territories? Each have their own territories in the wild. Will that be an issue for them as shifters?

For instance, what if a jaguar shifter moved into the town of Silver Town, one place that is totally run by a wolf pack? Would they object? How would a jaguar fit in if he or she had to run in Colorado? What if the jaguar had a mate and little jaguars?

The Victorian Inn is already prepared to handle a jaguar family with a jungle theme just for them in one of the rooms, but what if the family wants to stay and put down roots? Could they abide by wolf pack laws?

So many questions. Fun and conflict—that makes it fun for readers too!

Yep, there’s trouble in shifter paradise, and it’s Christmas on top of that. So it’s time to make some changes in the natural order of things, deal with the fallout, and make this the best Christmas ever. Series: Heart of the Jaguar, #5

There are all kinds of surprises under the mistletoe!

As a protector of all jaguar-kind, Guardian agent Demetria MacFarlane isn’t surprised to get a call near Christmas—but when she’s sent to protect a cub whose species she didn’t even know existed, her holiday season gets complicated. And it doesn’t help that her partner is a distraction of the hottest kind.

Hotshot JAG agent Everett Anderson can handle dangerous poachers and wildlife traffickers, no problem…but kids? Everett fears he’ll be stuck cub-sitting under the Christmas tree, but working with one sexy Guardian she-cat may be the best present he’s ever gotten.

To read our review of A Very Jaguar Christmas, A Recommended Read, click here.

USA Today bestselling author Terry Spear has written over fifty paranormal and medieval Highland historical romances. In 2008 Heart of the Wolf was named a Publishers Weekly Best Book of the Year. A retired officer of the U.S. Army Reserves, Terry also creates award-winning teddy bears that have found homes all over the world and is raising two Havanese puppies. She lives in Crawford, Texas.

Where you can find Terry: