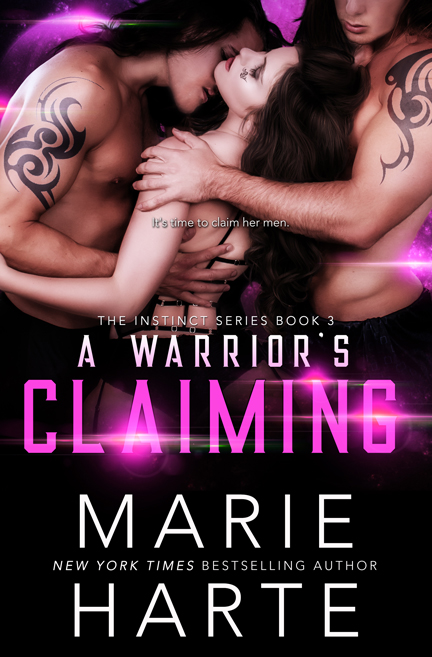 Two barbarians, one stubborn assassin, and a strange connection that they’ll need to use if they have any hope of saving the planet from an offworlder threat.

A WARRIOR’S CLAIMING, the third in The Instinct series, is now available! It’s a stand-alone novella, but it also builds on what’s occurred in the other Instinct books. It’s time to claim her mates…

Raia is on the hunt, and she never misses a target. No matter how big he–they–might be.

Arghet doesn’t know what to make of the new addition to the clan. Skehl is huge, an indomitable warrior with a beserker’s power. Once part of a hated enemy clan, he’s watched carefully. Somehow Arghet finds himself having to look after the beast. Arghet’s a Vyctore warrior. He has more important things to do than care for a troubled male. He’s doing his best to track down the strange female who stole his kill not long ago. Oddly, she bears the same skin markings as Skehl, a dark tribal marker on her left cheek.

But when he finally finds her, Arghet learns he’s no longer the hunter, but the hunted. And that Skehl is much more than the quiet, subdued warrior he once seemed…