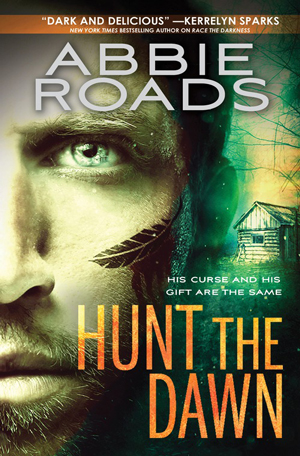 HUNT THE DAWN by Abbie Roads Abbie, how do you balance the romantic suspense with the romance?

My initial response when reading this question was, “I don’t know.” I’ve never really given it much conscious thought. It’s just something I’ve done without thinking about it. Or maybe I haven’t thought about it in the parameters of the question.

I’m a pantser—I write by the seat of my pants. I don’t have a plan. I just start a scene and see where it’s going to take me. Usually, I write five different openings to each scene before I find the one that’s going to take me on a journey. I’ve tried planning scenes. It doesn’t work for me. If I know what I’m going to write, I don’t want to write—I already know what’s going to happen! I like to be surprised. That’s why I say I’m not really giving the balance of romance and suspense much thought while I’m writing.

But there are things that I know contribute to the romance and the suspense that I do pay close attention to as I’m writing: Attraction. Conflict. Villain.

Personally, I don’t believe in love in first sight. But I do believe in knowing something is different and sensing that the course and direction of life has just changed. I try to convey that when my hero and heroine meet. They both end up exploring something new, something neither of them ever dared to dream about.

Conflict is essential. I don’t mean characters arguing with each other. What I mean ranges from things not going well in my characters lives to roadblocks, to full-on worst case scenario. I consider it my job to explore all the potential that making their lives worse has to offer. Conflict is the thing that makes a reader keep reading.

I love my villains as much I love my heroes and heroines. I try extremely hard to make my bad guys and their actions understandable, even a bit heroic—in a warped way. My villain always believes that what he is doing serves a higher purpose of good. Of course it’s horrific to everyone else, but there’s a reason and a rightness to why he’s doing it… If you look at it from his perspective.

I roll my eyes at the bad guy who sits around thinking about how bad he is or who simply spends a whole book planning one big awful thing. My villains actually do bad things. And when the reader sees what my villains are capable of, they worry for the hero and heroine. Especially when the reader knows there’s a villain, but the characters don’t. I love when that happens. Dawns a unique and powerful love

Nightmares are nothing new to Evanee Brown. But once she meets Lathan, they plummet into the realm of the macabre. Murder victims are reaching from beyond the grave to give Evanee evidence that could help Lathan bring a terrifying killer to justice. Together, they could forge an indomitable partnership to thwart violence, abuse, and death—if they survive the forces that seek to tear them apart.

Abbie Roads is a mental health counselor known for her blunt, honest style of therapy. By night she writes dark, emotional novels, always giving her characters the happy ending she wishes for all her clients. Her novels have finaled in RWA contests including the Golden Heart. Race the Darkness is the first book in the Fatal Dreams series of dark, gritty romantic suspense with a psychological twist.

7 Responses to Balancing the Suspense with Abbie Roads