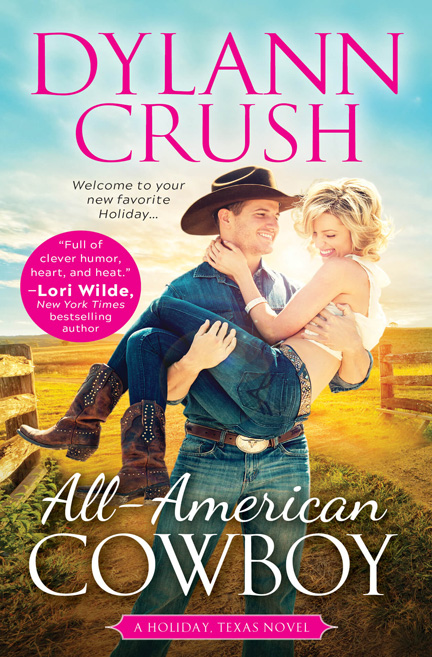 This city boy has it all figured out…

Until he goes toe-to-toe with a fierce cowgirl

Holiday, Texas is known far and wide as the most celebratory town in the South—and no shindig is complete without one of its founding members. It’s a real shame the last remaining Holiday is a city slicker, but what’s that old saying about putting lipstick on a pig…? This city boy has it all figured out…

Until he goes toe-to-toe with a fierce cowgirl

Holiday, Texas is known far and wide as the most celebratory town in the South—and no shindig is complete without one of its founding members. It’s a real shame the last remaining Holiday is a city slicker, but what’s that old saying about putting lipstick on a pig…?

Beck has no intention of being charmed by some crazy Texas town, but the minute he lays eyes on his grandfather’s old honky tonk—and Charlie Walker, the beautiful cowgirl who runs it—he finds himself wishing things could be different. Life’s gentler in Holiday. Slower. More real than anything he’s ever known. And when he looks into Charlie’s eyes, Beck may finally discover what it’s like to truly belong.

The man approached the driver’s side, his mouth curled into a sheepish smile. She forced a tight grin and leaned out the window. “What seems to be the trouble?”

“Thank God. I was starting to think I might die right here on the side of the road.” He rested one of those sinewy forearms on her door. A hint of expensive cologne wafted off his skin. “I seem to have lodged my rental in the ditch.”

Charlie ignored an uptick in her pulse and peered past him. “You did a nice job wedging yourself in there.”

He glanced toward his SUV, then back at her. “Yeah, I don’t really do things half-assed. Lucky for me you came along.” He offered another apologetic grin.

She didn’t reciprocate. Might be lucky for him, but her luck had apparently run dry. Who the hell had she pissed off recently to deserve a day like today? First she had to deal with Baby Back and now this city boy.

He waited a beat for a response that didn’t come, then tapped his hand against the doorframe. “So, yeah, something ran across the road, and I had to slam on the brakes. I’ve got Triple A. Does your cell phone work? I’ve got no service out here, but if yours works, I can call for a tow truck. I’m sure they’ll have me out of here in no time.”

The Yankee continued to spout off about cell towers and roadside assistance while she slid out of the truck. She turned her back to him and walked to the edge of the road. “There’s only one tow truck in town,” Charlie finally interrupted. “You’re welcome to give him a call. But I heard he went fishing. Depending on how the fish are biting, might take him a while to tear himself away.”

Beckett wiped away the sweat beading at his brow and shook his head. “Damn.”

He probably deserved to get stuck here all day waiting on a tow. She almost climbed back into her truck. But something about the way he cocked his hip and funneled a hand through his hair reminded her of Sully. Dammit.

With her hands clamped on her hips, she nodded toward the bed of her truck. “Why don’t you hand me a rope and I’ll see if I can pull you out?”

“Unless you want to sit in the ditch all day.”

“No, ma’am.” The dimple on his left cheek practically winked at her as he climbed onto the bumper and stepped into the bed.

She ran her gaze over his classy khakis, catching a glimpse of bare ankle at the hem. Loafers with no socks? Seriously? The local boys were going to chew this guy up like a wad of Skoal and spit him out before he even had a chance to settle that fine-looking ass onto a barstool.

“Will this work?” He held up a coil of rope.

The whole truck rocked as he climbed over the edge and hopped out. “I can do that for you.”

She smirked at the chivalrous offer. “Just toss me the rope. I wouldn’t want you to get your fancy shoes dirty.”

Beckett glanced down at his feet before shrugging and tossing her the rope. “I guess nobody told me loafers weren’t fit for Texas.” He was so easygoing about it, she almost felt bad for poking fun. But then she thought of all the years Sully had waited for some word from his family out east, and it made her want to shake him up even more.

“Boots aren’t a requirement. But they do come in handy when you find yourself wading through the tall grass to rescue a city boy in distress.” The end of the rope sailed her way and she snagged it out of the air, then scrambled down the embankment to secure it underneath the front bumper.

“I’ll try to avoid any further trouble.” He offered her a hand as she climbed out of the ditch. “I sure do appreciate your help.”

Charlie opted to take it. Warm, firm grip, smooth… Not like the hands of the men who worked on her family’s ranch. Those were callused and rough.

“Plus, they help keep the ticks away.” She reached the road and reclaimed her hand, not wanting to admit to herself how nice it felt to be touched by a man. Even if it was this man.

“Yep. Ticks like to hang out in the weeds.” Charlie brushed her hands against her thighs, trying to wipe away the tingles of contact before she bent down to secure the other end of the rope to her trailer hitch.

“Then I’d better keep my car on the road from now on. So what do we do next?” Beckett shifted his weight, gesturing to the SUV. “Do you think this will work?”

Standing, she squinted up at him. “Now you put it in drive and aim for the road, and I pull you out of the ditch.” She directed a pointed look to the SUV.

Charlie angled her hip. “Helps if you get in the car.”

He let out a deep laugh, and she had to bite back her grin. She didn’t want to admit to herself how much she was enjoying their little exchange. It had been a long time since she’d made a man laugh.