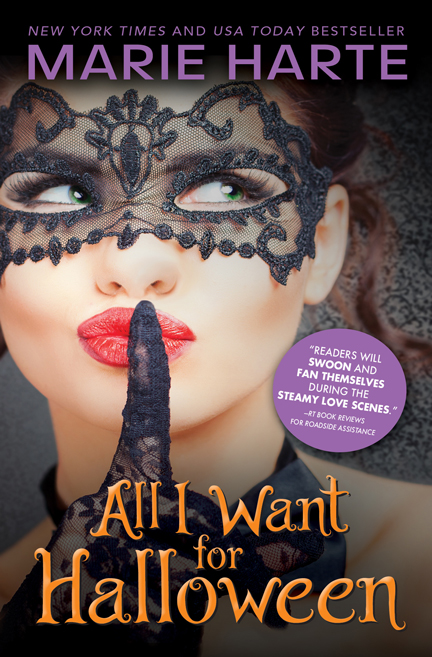 What reviewers have to say about ALL I WANT FOR HALLOWEEN by Marie Harte…
This book was my catnip! I freakin loved it and was very entertained! Mindy Lou’s Book Reviews

ALL I WANT FOR HALLOWEEN is a fun and sexy read. The premise is engaging; the characters are colorful and animated; the romance is seductive and energetic, without the over the top, sexually graphic language and text. Sandy S.

TONIGHT, SHE PLANS TO LET GO.

Dressed up and anonymous, Sadie Liberato feels powerful, sexy and free. Where better to lose herself than a masked party?

Gear Blackstone’s cheating ex and scheming best friend have managed to spin his life into a serious downward spiral. At least with a mask on he can cut loose for one night. And cut loose he does—with the sexiest, snarkiest chick he’s ever met.

After a scorching-hot encounter, Sadie and Gear are desperate to find each other in real life. But can the heat last when the masks come off?

Fantastic banter, two dominate people, shockingly sexy times, and a brilliant cast of characters, All I Want for Halloween was an exciting, fun story and a devil of a good time. Guilty Pleasures Book Reviews

A large, muscular man with tattoos, ear gauges, and a Mohawk standing inside the foyer bro-hugged Elliot, gave Sadie a refreshing once-over to let her know she was indeed a woman, and then let them continue inside.

The music grew louder the farther they walked into the party. But not so loud Sadie couldn’t hear her brother’s apparent shock. Or rather, his continued shock.

“I have no words.” Elliot stared at her as if Sadie had grown two heads.

“You keep saying that…which is kind of ironic, don’t you think?”

“You’re…hot. I mean, really sexy in that getup. Ew, I think I threw up in my mouth a little.” Elliot pretended to gag. Dressed as the Phantom of the Opera, her brother looked magnificent. The half mask he wore emphasized the vivid green of his eyes and the square line of his jaw. But now, inside and adjusting to the festivities, Sadie saw more beautiful people, making Elliot appear almost normal.

She glanced around at men and women in costumes a lot more revealing than hers. She’d been annoyed enough that she’d decided to go as a warrior princess, complete with a fake sword she considered using on her brother. Sadie’s costume showed a lot of skin but kept the important parts covered. Nothing less than what she wore at the gym, to be honest. A short skirt of fake leather and a matching halter top that bared a good bit of her toned stomach, complete with a scabbard at her back. Fake-gold armbands tightened around her biceps, while quality leather boots with tufts of faux fur around the tops looked authentic enough to be part of the costume. In reality she’d borrowed them from Rose.

Sadie had left her hair long with a single braid on each side of her face, and she’d darkened her eyes and lips with black makeup. A few fake war-paint lines under her eyes and across her cheeks apparently made her look authentically man-eating—or so the drunk guy brushing by her thought out loud.

Not bad. If he hadn’t been so sloshed, she might have considered trying him on for size. She had a leather satchel belted to her waist containing some money, a few condoms, and her phone.

“Oh my God. Is that who I think it is?” Elliot dragged her around the packed dance floor and up a half level toward the rear of the home leading out into the patio, where the crowd was thin enough to see a small gathering under bright lights. Space heaters and tall tables had been placed around a slate-slabbed yard, while strategically placed minibars provided drinks.

“Who are you talking about?” She rubbed her arms, feeling the chill before Elliot squeezed them in next to two couples by a space heater. Before she could ask again, her brother shushed her.

To the small group near them, he asked in a low voice, “Is that Gear in the Joker costume? And B-Man with Sahara?”

“Yeah” came a low reply from one of the men. “See the camera guy standing just behind the tall Batman? And the other one, the lighting guy there, is wearing scrubs, but he’s no doctor. Dude is working to keep the lights on in this clusterfu—”

“Foley,” the redhead next to him chastened.

“Come on, Cyn. This ain’t the place for reality TV. I just wanna party.”

Sadie glanced at the guy and blinked. The large man had dark hair, a muscular build—the way she liked them—and amazing gray eyes. Dressed as a sexy cop, he exuded menace more than law and order. Très sexy. Before Sadie could close her mouth, Cyn, the stunning redhead wearing an orange prisoner jumpsuit that clung to her curves, whispered something into his ear. He chuckled, and Sadie turned away, knowing she could never compete with a woman that pretty. Not that she’d ever try to break up a relationship, but with that woman, she’d stand no chance.

“Whatever.” She wanted to turn away, but their dialogue sucked her in.

Gear, the bodybuilder mechanic  from the TV show, wore white makeup and a green wig, and had a Joker grin painted in red over his lips, making him seem both perpetually smiling and sneering at the same time. The purple pin-striped suit he wore seemed painted onto his larger-than-life body. He looks damn good was all  she could think, wondering when she’d become so desperate that now maniacal clowns turned her on.

“Jesus, he shaved off his beard.” Elliot fanned himself. “I’m in lust.”

“I know.” Cyn sounded in awe until her boyfriend grunted. “I mean, I’m surprised about the beard.” She coughed. “It’s so sad they broke up, isn’t it, Foley? Gear and Sahara were perfect for each other.”

He shrugged. “Too bad about the show. They sure made some killer bikes.”

Next to them, another guy agreed while his girlfriend called Gear some unflattering names. Her boyfriend started to argue with her, defending the mechanic.

“People, we’re getting ready to roll.” A man holding a large mic over the TV combatants glared at the onlookers. “Quiet.”

The growing crowd around Sadie and Elliot grew silent.

Illuminated and surrounded by heat lamps, standing across from each other with the mediator seated on a barstool between them, the three leads of Motorcycle Madnezz—Gear as the Joker, with B-Man and Sahara as Adam and Eve—faced off.