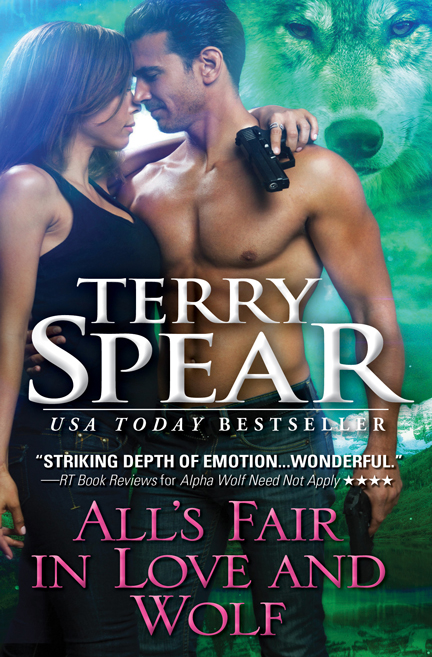 ALL’S FAIR IN LOVE AND WOLF by Terry Spear.

Wolf shifter Sarandon Silver’s in trouble with the law, and bounty hunter she-wolf Jenna St. James is determined to bring him in for trial.

Lucky for Sarandon, the entire Silver Town pack is ready to fight for his innocence. But until the case is solved, Jenna’s sticking to Sarandon like glue…

The Silver Town wolf pack has your back

Wolf shifter Sarandon Silver’s in trouble with the law, and bounty hunter she-wolf Jenna St. James is determined to bring him in for trial.

Lucky for Sarandon, the entire Silver Town pack is ready to fight for his innocence. But until the case is solved, Jenna’s sticking to Sarandon like glue…

Looking forward to seeing Jake there, Sarandon climbed into the Suburban and took off. This might be even more fun than he had planned.

Sarandon headed into the wilderness, and after a couple of hours, he finally reached the Elk Horn cabin. He parked, got out, and stretched. Taking a deep breath of the pines and Douglas firs, he embraced the peace and quiet, the sound of a river flowing nearby, birds twittering in the trees, and the breeze fluttering the leaves.

Once he’d hauled all his supplies inside, he started a fire in the fireplace and planned to go for a run, something he couldn’t do while acting as a tour guide. Not unless he was taking a wolf group out.

Within minutes, he’d stripped off his clothes and shifted, then pushed through the wolf door. He dashed through the woods, exploring and scent-marking, letting any animal in the area know a wolf was on the prowl and this was his claimed territory.

The sound of a car’s tires crunching on the private gravel road, heading toward the cabin, caught his attention. He stopped and listened from the shelter of the trees and brush. There was nothing out here but wilderness. And the cabins and the land were private property. He could tell by the engine’s purr that the car wasn’t Jake’s or anyone else’s he knew in the pack. The car parked, and the engine shut off in the distance.

If the driver were a hunter, Sarandon didn’t want to be caught in his wolf coat and end up getting shot. Cursing mentally to himself, he waffled about what to do. Hidden in the undergrowth in the woods, he could check out the person leaving the car, or he could run back to the cabin, shift, dress, arm himself with his rifle, and then see who it was and what he or she was up to.

Sarandon opted for returning to the cabin first and ditching his wolf coat. That way, he could tell the trespasser to leave.

When he reached the cabin, he dove through the wolf door, shifted, and rushed to dress. He removed his rifle from the locked gun cabinet and left the cabin, locking it behind him. Listening for any sign of where the person was, Sarandon headed down the road to where he’d heard the car park.

A quarter of a mile from the cabin, he stopped dead in his tracks. A woman was standing off the road, partially hidden in the woods, holding a rifle aimed at him. The way she was holding it, she looked like she knew how to use it. And he’d thought running as a wolf could cause him trouble!

“Hey, I’m just camping up here at one of my family’s cabins. I don’t have any intention of hurting you,” Sarandon said, trying to put the woman at ease, even if she was in the wrong. “This is private property .”

“Carefully, put the rifle down!” she commanded in an authoritative, no-nonsense way.

Well, this was bizarre. She was trespassing and pointing a rifle at him, and yet she was telling him to disarm himself when he belonged here? He considered her attire: black cargo pants, a black windbreaker, and boots. She didn’t look like a half-crazed criminal or a hunter either. He wasn’t afraid of her; he’d be much warier of a man holding a rifle on him than a woman. He just figured he’d spooked her.

“All right. All right. You don’t have to be afraid of me.” Being the nice wolf he was, Sarandon set his rifle on the ground, figuring the woman was going hiking, albeit on private property, and didn’t know privately owned cabins were located here, though signs were posted in the area. But the fact that she was carrying a rifle made him suspect something else might be going on. “I run photo-op tours, hiking, mountain climbing, and white-water rafting guided tours, one-on-one tours, and group tours.” He thought if he told her what he did, she would realize he was employed, not some mountain man living out here in the wilderness alone, and that his occupation meant he was one of the good guys who liked working with people. “Whatever customers might be interested in,” he continued.

She was someone he was interested in. If she was a wolf and would put the weapon down. Something about her straightforward and confrontational attitude appealed. He swore it was the wolf in him.

Learning that she knew his name surprised him. If she knew who he was, why was she pointing the rifle at him? Then he wondered if this had something to do with his brothers. Maybe they’d sent her as a plant, a way to get him to meet a new she-wolf, believing the standard boy-meets-girl routine wouldn’t cut it with him. Especially since he’d said he was trying to come up with an idea for a new adventure.

“Yeah, I’m Sarandon Silver. Do you want to tell me how you know me and why you’re still pointing a weapon at me?” She had to be his brothers’ idea, but he wondered where she was taking this.

If this was for real, he didn’t recall anything he’d done that would have aggravated anyone to the extent that she’d pull a weapon on him. He hadn’t taken a mate and pissed off her family. He hadn’t lost anyone on one of his excursions. His dad was the only one who’d ever committed any crimes in the family, and he’d paid for his sins with his life.

“Come this way, nice and slow,” she said, her voice firm and resolved.

He frowned at her. She sounded like a cop. He looked her over again, but her clothes didn’t indicate that. He couldn’t see what was underneath the jacket, though from the slight bulk underneath the material, it looked like she might have a sidearm holstered there. She hadn’t said she was a cop though. Plus, if she were, she wasn’t in her own jurisdiction. Her car was a silver Ford Expedition, with no indication it was a cop’s vehicle.

She was a beautiful brunette, her hair cut short and bouncy, her eyes a crystal-clear blue. If his brothers—and maybe his cousins—had put her up to this… Well, he didn’t want to appear as though he couldn’t take a joke. She’d share with them how growly he’d been, and they’d all have a good laugh over it—at his expense.

“Am I under arrest?” he asked with good humor, smiling a little. He couldn’t help it. He couldn’t take this seriously.

USA Today bestselling author Terry Spear has written over sixty paranormal romances. In 2008, Heart of the Wolf was named a Publishers Weekly Best Book of the Year. A retired officer of the U.S. Army Reserves, Terry also creates award-winning teddy bears that have found homes all over the world. She lives in Spring, Texas where she raises two Havanese puppies.