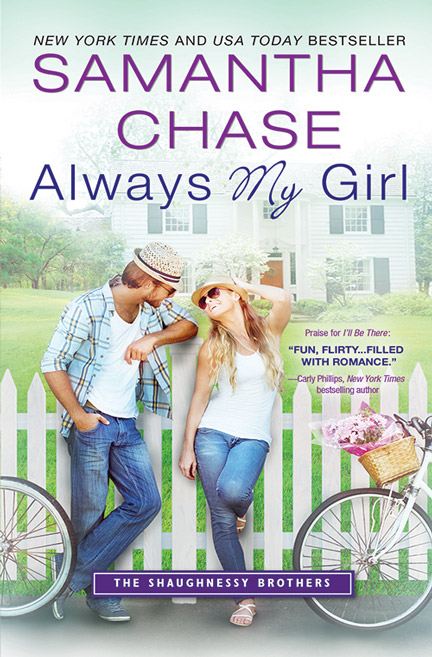 Sometimes the love that’s closest to you is the hardest to see.

Quinn Shaughnessy’s two older brothers have found their true loves … but Quinn’s not about to join that parade. Nope, as he tells his best friend Anna, there’s a lot more to life than getting tied down to one person. He’s positive tomboy Anna will be on his side — except she’s inexplicably developing other interests — even dating! Suddenly Quinn is seeing Anna in a very different light.

Sometimes the love that’s closest to you is the hardest to see.

Quinn Shaughnessy’s two older brothers have found their true loves … but Quinn’s not about to join that parade. Nope, as he tells his best friend Anna, there’s a lot more to life than getting tied down to one person. He’s positive tomboy Anna will be on his side — except she’s inexplicably developing other interests — even dating! Suddenly Quinn is seeing Anna in a very different light.

Quinn has been Anna’s buddy since they were both five years old. She can tell him anything — except the one big secret she’s been hiding for years — that she’s fallen in love with him. Now Anna is determined to make a life for herself that doesn’t include pining for Quinn. Falling in love with your best friend? Easy. Telling them how you really feel? Impossible.

She’d always been in love with Quinn. Ever since they were kids. She just…she knew. He was the one for her. Her soul mate. The only problem was Quinn didn’t feel the same way. She was his pal. His buddy. There’d never once been anything romantic between them, and if he even suspected how she felt, he’d never let on.

With a sigh, she relaxed back on her belly with her arms folded under her head. And now, even if he did suddenly notice she was a woman, it still didn’t make a difference. He was still surly and difficult and not impressed. Lying here in next to nothing, rather than making him maybe be a little more charming—like he always got with other girls—he was angry and trying to cover her up.

Quite the ego boost. Not.

And then his hands were on her and…oh. Slowly, those big, work-roughened hands started at her ankles and began a journey upward. Oh my…

She almost wanted to turn and watch him work. With his sandy-blond hair, blue eyes, and rough hands, he was her every dream. All the Shaughnessys had dark hair except for Quinn. It used to bother him, and by the way he normally wore some sort of hat or beanie, Anna could tell it still did. But he wasn’t wearing one now, and with all the sensations he was creating in her, she wanted to roll over and rake her hands through his hair and pull him down toward her.

It was never going to happen, but the imagery kept her smiling while he touched her.

Quinn was completely silent and Anna seemed unable to breathe. She couldn’t move, couldn’t breathe…she could only feel. And, boy oh boy, was Quinn making her feel. His hands skimmed the backs of her knees, and when they hit her thighs and one finger came close to her bottom, she had to stifle a moan of pleasure.

His hand stopped for a moment as if he realized what he was doing—and what he almost did. Anna almost lifted her head to look at him but thought better of it. And then his hands were on her again—this time on the small of her back. And then upward—circling, rubbing, massaging. She wanted to purr.

When they hit her shoulders, his motions seemed to slow as he went into what could only be described as a deep tissue massage. All of the tension from a few minutes ago completely faded away as his hands—those magnificent hands—worked on her. On any given day, Anna was all for a good massage, but this was beyond good. It was almost a religious experience. And this time she couldn’t stop herself from purring.

His hands instantly were gone.

She didn’t bother to look up. Didn’t bother to question it. No good would come of turning around and seeing the look of horror on his face at her reacting the way she just had to him.

Beside her, Quinn cleared his throat and stood, the bottle of sunscreen hitting the ground. “Um…yeah, so…that should do it,” he croaked. “You should be good for now. I’m going to go and find Zoe and get settled in. I’ll see you later.”

Again, Anna didn’t bother to respond. The man was clearly running away because she had been foolish enough to let her guard down for a minute. She waited until she heard the sliding doors to the house open and then close before she allowed herself to lift her head and look around.

Out of the corner of her eye, she saw Zoe stepping back outside shaking her head. When she got closer, she said, “What did you do to him?”

“Me? Nothing! I just laid here and let him put sunscreen on me. Why?”

Zoe laughed as she sat back down. “He ran in the house as if he were on fire and demanded to know which room was his. I offered to show him, but he was already halfway up the stairs yelling for me to just tell him which one!”

“Tell me about it.” Zoe relaxed back in her spot. “So…he didn’t say anything to you? Not even while he had his hands all over you?”

Anna glared at her. “Yeah, thanks for that. The only time Quinn ever touches me is to give me a high-five or to punch me in the arm when I beat him at something.”

“Ah…so this was the first time he like…really touched you.”

“What are you doing, Zoe?” Anna asked wearily. “Why are you stirring up trouble?”

“Because it’s so obvious you’re into him.”

“Well…duh! It’s no surprise. We’ve talked about this. A lot.”

“Yeah we have, but you never do anything about it. I was merely…prodding things along.”

“Yeah…well…keep your prodding to yourself. In case you didn’t notice, your little attempt failed. Big time. Now I know what it feels like to have his hands all over me, and while I’m sitting here in a puddle of my own drool, he’s running and hiding in his room to escape. He couldn’t get away fast enough.”

“Oh, I don’t think I’d count this as a fail, my friend,” Zoe said sweetly. “I think you made him nervous. I think we prodded him just enough for the blinders to finally come off.”

“What are you talking about? He was horrified. He was…he was massaging my shoulders and I…” Anna paused and cringed. “I moaned.”

Anna shot her a look. “Yes, like a sex noise. Like a big, loud ‘I’m on the verge of an orgasm’ sex noise. There. Are you happy?”

Zoe threw he head back and laughed. “Oh my gosh! That’s awesome!”

This time Anna twisted and sat up. “How is it awesome? He’s going to avoid me like the plague from now on! It’s bad enough he only sees me as a friend and now I’ll lose that! Dammit, Zoe.”

“Okay, hold on. You’re freaking out over nothing. I’m telling you, that man just got the shock of his life. When he spotted you over here, he didn’t realize it was you, and he was practically salivating.”

“Yeah, and it all stopped as soon as he got a look at my face and saw it was me.”

“Forget it,” she said and got to her feet. “I…I can’t talk about this anymore. I’m going for a quick dip and then I’m going inside. Maybe I need to hide out in my room for a while.” And then she took the few steps to the side of the pool and swiftly dived in.

Samantha Chase released her debut novel, Jordan’s Return, in November 2011. Since then, she has published seventeen more titles and has become a New York Times and USA Today bestselling author. She lives with her husband of twenty-four years and their two sons in Wake Forest, North Carolina.