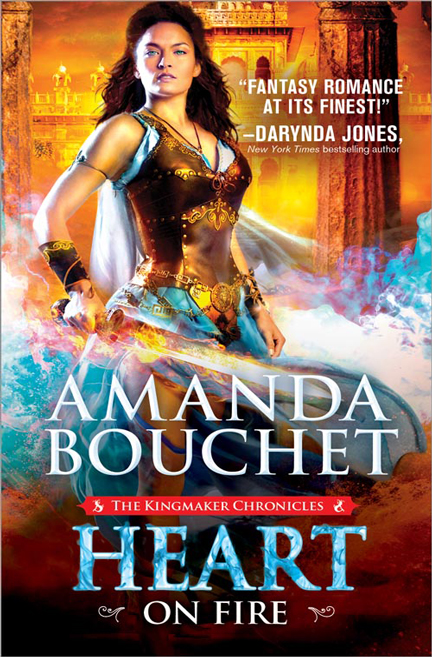 Amanda Bouchet’s HEART ON FIRE is the riveting conclusion to The Kingmaker Chronicles!

Without Griffin—and apparently a few meddling Gods—to push me along, I’d still be telling fortunes at the circus, lying about my past, ignoring my future, and living as far away from my tyrant mother as humanly possible.

True understanding thuds into place. Hope isn’t just an abstract concept; it’s me. Flesh and blood me. Griffin knew it all along. Probably everyone did. I’m an idea in human form. Heart on Fire by Amanda Bouchet

The riveting conclusion to The Kingmaker Chronicles!

Without Griffin—and apparently a few meddling Gods—to push me along, I’d still be telling fortunes at the circus, lying about my past, ignoring my future, and living as far away from my tyrant mother as humanly possible.

True understanding thuds into place. Hope isn’t just an abstract concept; it’s me. Flesh and blood me. Griffin knew it all along. Probably everyone did. I’m an idea in human form.

I have the power of the Gods at my fingertips.

The only thing ever stopping me has been me.

Griffin’s hand tightens on my arm.

I roll my eyes. “I’m not going to fall in, you know. The cliff is all the way over there.”

He loosens his hold. Sort of.

I glance up at him, trying to tame my sudden smile. Domineering and overprotective doesn’t even begin to describe my husband. There’s also deliciously jealous, but that’s another subject all together. The black stubble framing his mouth makes his full lips look impossibly kissable. It’s been hours since they were last on mine. And I love to kiss the hawkish curve of his nose. So strong and masculine. I adore that nose. And the rest of him. His powerful body. Muscle. Sinew. Bone.

I gaze up at him, nearly sighing. “I love you.”

Griffin stops dead in his tracks and glares down at me. “That’s it. We’re leaving.”

“You think something terrible is going to happen.”

His eyes narrow, wariness hardening his expression. “You do.”

“What are you talking about?”

He scowls at me.

“Well, something terrible could happen,” I concede. “But that’s always true, no matter where or when. Tomorrow, I could trip over my own feet and break my neck for all I know.”

Judging by the look on Griffin’s face, I don’t think that helped.

“You only say you love me or you’re sorry when you’re scared or almost dead. You’re not almost dead, so what’s scaring you?” he demands.

“When we’re in bed. When I’m so deep inside you that you can’t feel anything but me. Not when we’re about to knock on a stranger’s door. What’s scaring you?” he demands again.

I huff. “At the moment? The way your jaw is popping like it’s alive.”

His nostrils flare. His hard look is spectacular.

I’m not intimidated. It makes me hot. Then again, so does just about everything at the moment, but not in the same way.

“If you must know, the magic around here is a little intense and…disturbing, but it’s not scaring me. Not really. It’s probably just something coming from whatever is down there in that God Pit,” I say, waving toward the cliff. “I’m a shade nervous. That’s all.”

His eyes stay flinty and unconvinced. “That’s all? That’s not generally cause for a heartfelt declaration, at least not from you.”

I toss my hands in the air. “Fine. I take it back. I looked at you, found you incredibly desirable, and my body got all hot and tingly. I blame pregnancy for an excess of sentimentality and…and…urges!”

Griffin stares at me. Then his mouth splits into a grin that makes me all kinds of angry. He reaches for me again, his grasp lighter this time.

“Incredibly desirable?” Looking smug, he threads his fingers through mine.

Scowling, I poke him in the chest with my free hand. “Well, you do have that whole overbearing warlord thing going on. Plus, plenty of muscles in all the right places, some good ideas, and, you know, a really big sword.”

A laugh cracks out of Griffin, and my heart swoops like an off-balance bird. He’s rarely free with humor these days, or maybe there’s just not enough of it in our lives anymore. The happy flutter that wings through my chest takes any lingering irritation away with it.

Griffin captures my other hand and then pulls me in to him until I’m standing between his legs. “I love you, too, Cat.”

He kisses me, his mouth pressing softly against mine. Warmth rolls straight from his lips to my toes, which curl in my boots.

“Tell me again,” he coaxes.

I shake my head, our noses brushing.

“Say it,” he demands against my mouth.

“Last chance,” he warns, gently nipping at my lower lip.

Chuckling, Griffin swats my bottom. “There’s more where that came from.”

I look up at him through my lashes. “I sure hope so.”

He grins. “I think you just managed coy.”

“Good Gods! Has the Underworld frozen over?”

“Next, Centaurs will fly.” He brushes his lips over mine again, not lingering, and when he lifts his head, his black hair ruffling on the faintly sulfurous wind, the teasing gleam is already absent from his eyes. “You’re sure there’s nothing else?”

“Nothing besides our baby wreaking havoc on my moods?” I shake my head. “But I wanted you before. I want you always.”

He lifts his hand and brushes his thumb across my lips. Then his fingers fall away, trailing lightly down my arm until I shiver.

“You’re the air I breathe,” he says without a trace of humor in his voice.

My whole chest clenches hard, squeezing a tight, almost painful beat from my heart. “I admire you,” I reply. “I need you. I love you with all my heart.”

Griffin offers me a different kind of smile this time, small, lopsided, gentle, and so entirely genuine. It fades almost immediately, though, and he straightens to his full, imposing height, abruptly pinning me with his warlord stare. “If you feel anything off here, we leave, with or without the potion we came for. You’ve got great instincts, Cat. Trust your gut.” USA Today bestselling author AMANDA BOUCHET grew up in New England and studied French at the undergraduate and graduate levels, first at Bowdoin College and then at Bowling Green State University. She moved to Paris, France, in 2001 and has been there ever since. She met her husband while studying abroad, and the family now includes two bilingual children, who will soon be correcting her French. Connect with her at www.amandabouchet.com.

Enter to win a bundle containing A Promise of Fire and Breath of Fire, the first two books in Amanda Bouchet’s Kingmaker Chronicles!