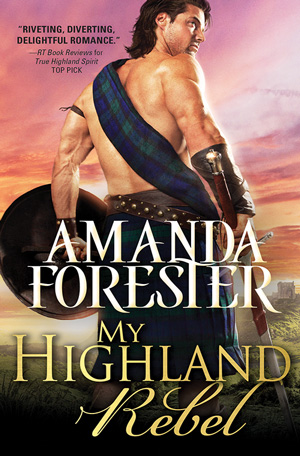 In MY HIGHLAND REBEL by Amanda Forester, Cormac Maclean would rather read than rampage, but his fearsome warlord father demands that he prove himself in war. Cormac chooses what he thinks is an easy target, only to encounter a fiery Highland lass leading a doomed rebellion and swearing revenge on him. Cormac Maclean would rather read than rampage, but his fearsome warlord father demands that he prove himself in war. Cormac chooses what he thinks is an easy target, only to encounter a fiery Highland lass leading a doomed rebellion and swearing revenge on him.

Jyne Cambell is not about to give up her castle without a fight, even though her forces are far outnumbered. She’s proud, hot-blooded and hot-tempered, and Cormac falls for her hard.

Amanda Forester holds a PhD in psychology and worked many years in academia before discovering that writing historical romance was way more fun. A Publishers Weekly Top Ten author, her books have been given starred reviews from Booklist, Publishers Weekly, and a Top Pick from RT Book Reviews. Whether in the rugged Highlands of medieval Scotland or the decadent ballrooms of Regency England, her novels offer fast-paced adventures filled with wit, intrigue, and romance. She lives with her family in the Pacific Northwest outside Tacoma, Washington.

She had always wanted to have an adventure. That was her first mistake. Her second was to set off for a little privacy in the thick fog of the Highland morning.

Lady Jyne Campbell tramped along the cold ground of the Highland moor, trying to retrace her steps back to camp. She could not have gotten far. Could she? She considered calling out to her brothers for help, but rejected the idea. She wished to show her clan that she was capable of taking care of herself. Admitting she had gotten lost in the fog was not going to help her cause.

Being the youngest daughter, Jyne was accustomed to being bossed about by all of her fourteen siblings. And not just any siblings—Campbell siblings. Her eldest brother was David Campbell, laird of the pow­erful Campbell clan. The Campbell brothers were tall, broad-shouldered, hardworking, and a formidable foe to their enemies. The Campbell sisters were statuesque, brave, bold, and ready to stand shoulder to shoulder with any man to defend the Campbell clan, or against any clansman who got out of line. Jyne’s mother had borne fifteen children, and not one of them had the audacity to die in childhood. No, frailty was not allowed in the Campbell household.

All except Jyne. She had been born a little too soon and had always been small. In childhood, she was prone to illness and had a delicate constitution. Being of questionable health during her formative years, she was never chosen to travel or have any adventures. Though her dreams were as big as any of her siblings, she had to content herself with listening to the stories of others and making herself useful about the castle, while the other siblings returned with wild tales of their exploits.

Jyne paused a moment, straining to hear sounds from the camp. She would rather search for hours than admit to her over­protective brothers she had gotten lost in a bit of mist. She continued walking in the thick gray fog, which blanketed the rugged landscape. Straining to see ahead of her in the fog and stepped onto something she thought was firm ground, but suddenly wasn’t.

“Oh!” She fell forward into a bog, gasping as the cold, muddy water engulfed her to her thighs. “Oh, no!” She struggled, trying to find firm ground to drag herself out of the treacherous moor, but everywhere she touched was made of cold, wet mud. Her efforts were rewarded only by her sinking into the bog a few inches more.

The freezing sludge seeped through her clothes and held her fast, like an icy claw. The smell of rotting swamp gas made her gag. Her heart pounded in her throat, along with the remnants of her last meal. She had heard stories of people getting trapped in the bog and never returning.

She clenched her teeth to stop them from chatter­ing. Should she call for help? The thought of the looks on her brothers’ faces to find her stuck in the bog shut her mouth. She made another try for solid ground, straining her reach for a crop of grass.

She could almost make it. Her fingertips brushed tantalizingly against the stems of the grass, but there was nothing to grasp. She could not reach solid ground. Her efforts had only caused her to sink another few inches as fear slithered down her spine. Nothing she could do was going to get herself out.

“Help! David? Help!” Her pride was gone. She only hoped her brothers would hear her before she was gone. “Can anyone hear me?”

She had expected her siblings to come running as soon as she called. She could not be that far from camp. Could she? She listened for footsteps, for any hint that help was on the way. She heard nothing.

Panic surged within her, tinged with frustration. The one time she actually wanted her brothers to hover over her, and they were nowhere in sight. She made another lunge for solid ground, but the more she moved, the farther the bog sucked her down, and soon she was up to her waist, panting with exertion and sheer terror.

She closed her eyes and screamed with all her might, “Help! Heeeeeelp!”

“Here, lassie, take my hand.” A man, a stranger to her, flung himself onto the solid ground and reached out his hand over the murky bog. She grasped it, and he began to back up slowly, pulling her from the quagmire. He pulled hard, but the swamp resisted, as if unwilling to release its prize from its cold clutches. Finally, he wrenched her from the deadly swamp, and she collapsed beside him on firm ground.

“Thank ye,” she gasped, not sure if she was trem­bling from the fear of coming near death or the frozen chill of the mire still permeating her bones.

“Are ye hurt?” asked the stranger. He was a tall man dressed in the plaid kilt of the Highlander, belted at the waist and thrown over one shoulder. He had a wild mop of unruly brown hair and glint­ing dark eyes. He was armed with a bow and quiver of arrows and had several scrolls stuck into his wide leather belt.

Her teeth chattered. “N-nay, just relieved to be out o’ the bog.”

The stranger stood up and took her with him, easily lifting her to her feet. “Ah, lass, ye’re chilled to the bone.” He pulled her close and wrapped the ends of his plaid around her, warming her with his own heat. She melted into the comforting warmth and safety of his arms.

Jyne sighed. She had a vague feeling she should not be enjoying an embrace with a total stranger. She must be simply thankful to be out of the bog. At least that is what she told herself to justify resting her cheek against his chest.

“Thank ye. I dinna ken what would have happened to me if ye hadna come along,” said Jyne into the man’s solid chest. “Ye must have been sent by the angels to save me.”

The man laughed. “Angels? That would be the first time anyone said that about me.”

Jyne looked up at him. He had a decided jawline and sharp cheekbones. His face was almost angular, but attractive. His dark green eyes gleamed in the early morning light. He was a trim, muscular man who looked to be in his early twenties. Perhaps it was her brush with danger, but she decided he was the most handsome Highlander she had ever seen.

“Then I am glad to be the first to say it to ye. Ye truly are my hero.” Jyne’s voice trembled with sincerity.

“I’m nobody’s hero.” He tilted his head with a sardonic smile.

He shook his head. “Ye owe me naught.”

She touched her hand to his cheek, and he tilted his head toward her, leaning closer.

Jyne jumped away from the stranger and turned to see her brother, Laird of the Campbells, emerging from the mist.