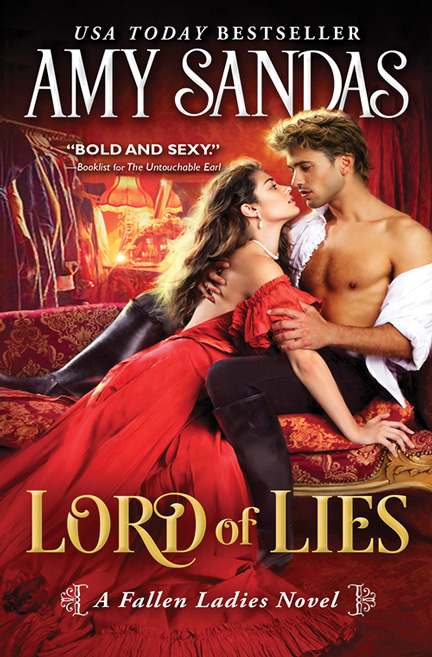 LORD OF LIES by Amy Sandas…

“You do strange things to me, Dell Turner. Tell me I am not alone in what I feel.”

His voice was low and rough. His eyes burned. “You are not alone,” he said.

Portia Chadwick longs for a life of adventure. When a dangerous moneylender kidnaps her sister, she dares to seek help from a man known only as Nightshade. Soon she finds herself charging headfirst into his world of intrigue and danger—and unexpected passion.

Enter to win a copy of Luck is No Lady, first book in Amy Sandas’ sexy and bold Fallen Ladies series! “You do strange things to me, Dell Turner. Tell me I am not alone in what I feel.”

His voice was low and rough. His eyes burned. “You are not alone,” he said.

Portia Chadwick longs for a life of adventure. When a dangerous moneylender kidnaps her sister, she dares to seek help from a man known only as Nightshade. Soon she finds herself charging headfirst into his world of intrigue and danger—and unexpected passion.

Dell Turner grew up in London’s back alleys and gin lanes. Vowing to escape his low beginnings, he hires himself out to society’s elite. When he accepts a job from a beautiful debutante, he doesn’t anticipate her relentless determination to join his mad occupation…or her unnerving ability to inspire emotions he thought long buried. She’s as dangerous to him as his world is to her, and yet Dell can’t bring himself to turn Portia away—even if it means risking her life.

He was home for only a few short minutes—not even long enough to shed the guise of Robert French—before there was a sharp knock at the front door. Morley was still taking care of the carriage and horses so wasn’t available to answer.

With a growl at being disturbed so blasted early in the day after being up all night, Dell lumbered from his study where he had been organizing a plan for his next steps in the Chadwick abduction. He opened the door just as the caller was about to knock again.

The disturbing slate-gray gaze of the precocious Miss Chadwick widened with a start before she low­ered her arm.

Dell’s immediate instinctive response was to slam the door shut. This woman triggered far too many distractions in his mind, as well as his body. She set him on edge, made him feel less in control.

He didn’t slam the door because his next thought was the realization that such a reaction would only pique her curiosity even more. He would need to employ another tactic to get rid of her.

Altering his voice to the smooth, unassuming, lilt­ing tones of Robert French, Dell asked, “Can I help you, miss?”

She tilted her head beneath the wide fall of her cloak hood, and her striking eyes narrowed dangerously. He was suddenly intensely aware of his appearance. French’s look often drew interested gazes from bold young women. Women who understood his jaunty swagger and the overt sensuality in his movement and expression.

Dell felt Portia Chadwick’s gaze like a stream of concentrated interest shooting straight to the center of his chest.

Dell straightened his spine and tried to look down his—or rather French’s—nose at her. Not that he thought any kind of intimidation would work on the chit, but he needed some way to distract from his unwelcome and wholly disturbing reaction.

“I believe you can,” she answered before she boldly strode across the threshold.

At any other time and with anyone else, Dell would never have allowed a person to just enter his home in such a way. But his current physical sensitivity to this woman had him stepping back on instinct to avoid direct contact, which gave her just enough room to sweep the rest of the way into the house.

Closing the door with a hard click, he turned to face her and saw that she had already crossed the small hall to the parlor. Dell gritted his teeth so hard his jaw ached. Following her into the front room, he watched with a further tightening in his loins as she swept her voluminous cloak from her shoulders to toss it care­lessly to the sofa.

She was still clothed in the same evening gown from the night before. Dell couldn’t stop his gaze from dropping briefly down her narrow back to the suggestive curve of her hips and buttocks before she spun around again to face him.

“I do not believe it is proper manners to so rudely force your way into someone’s home,” he said almost plaintively. “Especially when they are not at home.”

She laughed then, a full-bodied sound accompanied by a knowing flash in her eyes. She arched her winged black brows and placed her hands on her hips. “Do not bother with the theatrics. I know it is you, Mr. Turner,” she declared.

How the hell had she known?

The first time anyone had ever seen through one of his disguises, and it had to be she.

Dell considered denying it, but figured the truth would likely get her out of there faster.

“Fine,” he said in his natural voice, which carried more than a hint of his annoyance. “Mind telling me what the hell you are doing back here? I told you I would let you know when I learned something.”

“And did you? Learn something?” she asked, her tone hopeful.

“Not yet,” he replied stiffly, expecting her to press him further or demand he do more.

“Well, the situation has changed.”

Dell narrowed his gaze. “How?”

“My sister returned home safely less than two hours ago.”

It was not what he’d expected to hear. But it would do. “You have come to pay the remainder of my fee, then?”

She tipped her head, allowing the black ringlets falling from her coiffure to gently graze her col­larbone. “Not exactly.” Turning away, she strolled toward the front window.

“Then what? Exactly?” he asked, fighting the inex­plicable desire to follow her across the room.

She glanced back over her shoulder with a chal­lenging light in her gaze. “You were hired to find my sister and bring her home. Since she obviously managed to do that on her own, I have decided to give you another chance to earn your full fee.”

Crossing his arms over his chest, Dell asked, “What would you have me do now?”

USA Today Bestselling author Amy Sandas’s love of romance began one summer when she stumbled across one of her mother’s Barbara Cartland books. Her affinity for writing began with sappy preteen poems and led to a liberal arts degree from the University of Minnesota Twin Cities. She lives with her husband and children near Milwaukee, Wisconsin.