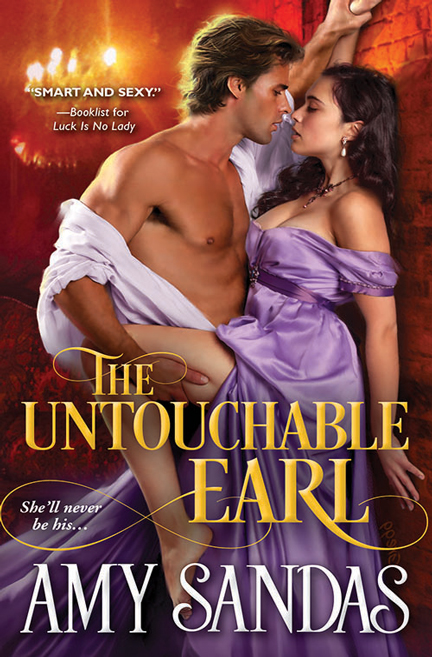 THE UNTOUCHABLE EARL by Amy Sandas.  Lily Chadwick has spent her life playing by society’s rules. But when an unscrupulous moneylender snatches her off the street and puts her up for auction at a pleasure house, she finds herself in the possession of a man who makes her breathless with terror and impossible yearning…

Who is your favorite supporting character in The Untouchable Earl, and why?

I would have to say that my favorite supporting character in The Untouchable Earl is a toss-up between Lily’s younger sister Portia, who’s a bit of a social rebel, and the villain of the series, the brutish moneylender, Mason Hale.

Portia is just so wonderfully unexpected and way ahead of her time. She refuses to be tied into what others want her to be and she is fiercely loyal to her sisters. But since her story will be told in its entirety in book three of the Fallen Ladies series, I think I’ll save any discussion on Portia for another time.

Which leads me back to our villain. Mason Hale. Former bare-knuckle boxer turned money-man. Using his brain instead of his heavy fists, he now runs the stakes on the fights he used to win.

When I started thinking about the kind of villain I needed for this series, I did not want someone who was just a one-dimensional bad-guy. The Chadwicks’ enemy had to be someone who was motivated to do the things he did for reasons they were completely unaware of. I wanted to suggest to the reader that he wasn’t an evil man so much as a desperate man. With that purpose, I wrote a few scenes that were strictly from his point of view to give the reader knowledge and insight about him that the Chadwicks were not privy to.

As fun as it is to create a truly evil villain, it was way more interesting for me to try to show how Hale may not be all bad after all. In forming his character and his backstory, I considered the question of what could push him to the extreme.

Yes, he is a menacing moneylender who demands repayment of a loan the Chadwicks cannot possibly repay. And yes, he uses terrifying threats and eventually kidnaps Lily and sells her to a brothel in order to claim repayment. He acts in a deplorable way towards them, no doubt about it. But what could make a man—who had lived a rough life, but who still believed in a certain code of honor—to act out against someone completely undeserving?

When under the right provocation, people can be forced to do things they never would have considered doing otherwise. Good people will commit crimes, hurt others, and find justification in horrible behavior if their ultimate goal is to save and protect someone they love. And that is the situation Hale finds himself in.

Having proper motivation does not change the fact that Mason Hale has his fair share of character flaws and a history on the streets that did not lean him toward possessing a gentlemanly nature. But he loves his daughter. So much that in knowing his own deficits, he believes himself unworthy of fatherhood and leaves her in the sole care of her mother. He could not have known just how detrimental that choice would prove to be for the child. When he realizes his error, he does what he must to make amends and ensure his daughter future safety, though his options are limited.

All of his actions toward the Chadwicks are made with his daughter in mind. His desperation and ferocity comes from fear and a fierce need to secure his child’s future.

Mason Hale as a character is complex, imperfect, and real. He shoulders a history of past violence and bad decisions. But after getting to know him throughout The Untouchable Earl, and also from his scenes in the first book in the series, Luck is No Lady, and knowing what he does in the third book, he easily became one of my favorite characters to write. “Yes,” she replied in a soft voice. “But I love the way you frighten me.”

Lily Chadwick has spent her life playing by society’s rules. But when an unscrupulous moneylender snatches her off the street and puts her up for auction at a pleasure house, she finds herself in the possession of a man who makes her breathless with terror and impossible yearning…

Though the reclusive Earl of Harte claimed Lily with the highest bid, he hides a painful secret—one that has kept him from knowing the pleasure of a lover’s touch. Even the barest brush of skin brings him physical pain, and he’s spent his life keeping the world at arms’ length. But there’s something about Lily that maddens him, bewitches him, compels him…and drives him toward the one woman brave and kind enough to seek to heal his troubled heart.

Amy Sandas’ love of romance began one summer when she stumbled across one of her mother’s Barbara Cartland books. Her affinity for writing began with sappy pre-teen poems and led to a Bachelor’s degree with an emphasis on Creative Writing from the University of Minnesota-Twin Cities. She lives with her husband and children in Wisconsin.

Where you can find Amy