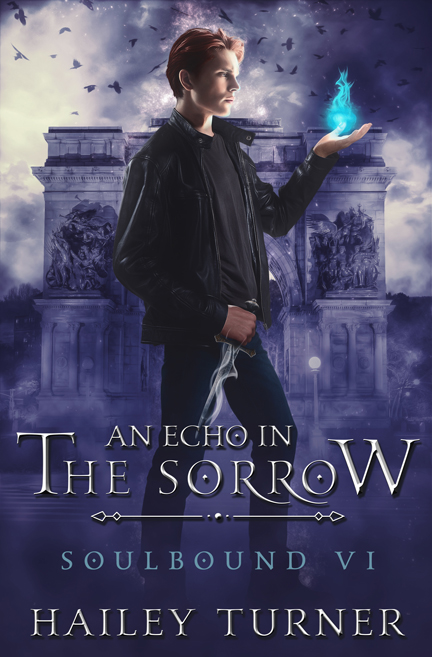 Check out the excerpt from Hailey Turner’s new novel, AN ECHO IN THE SORROW (SOULBOUND VI), outstanding LGBTQ Urban Fantasy!

Forgiveness is a hollow prayer you only hear in your dreams.

Patrick Collins has spent years handling cases as a special agent for the Supernatural Operations Agency, even as his secret standing in the preternatural world has changed. He should have confessed to his role as co-leader of the New York City god pack when he and Jonothon de Vere took up the mantle months ago, but he didn’t. Now that split loyalty will cost him at a time when he can least afford it.

An Echo in the Sorrow is a 118k word m/m urban fantasy with a gay romantic subplot. It is a direct sequel to On the Wings of War. Reading the first book in the series would be helpful in enjoying this one. 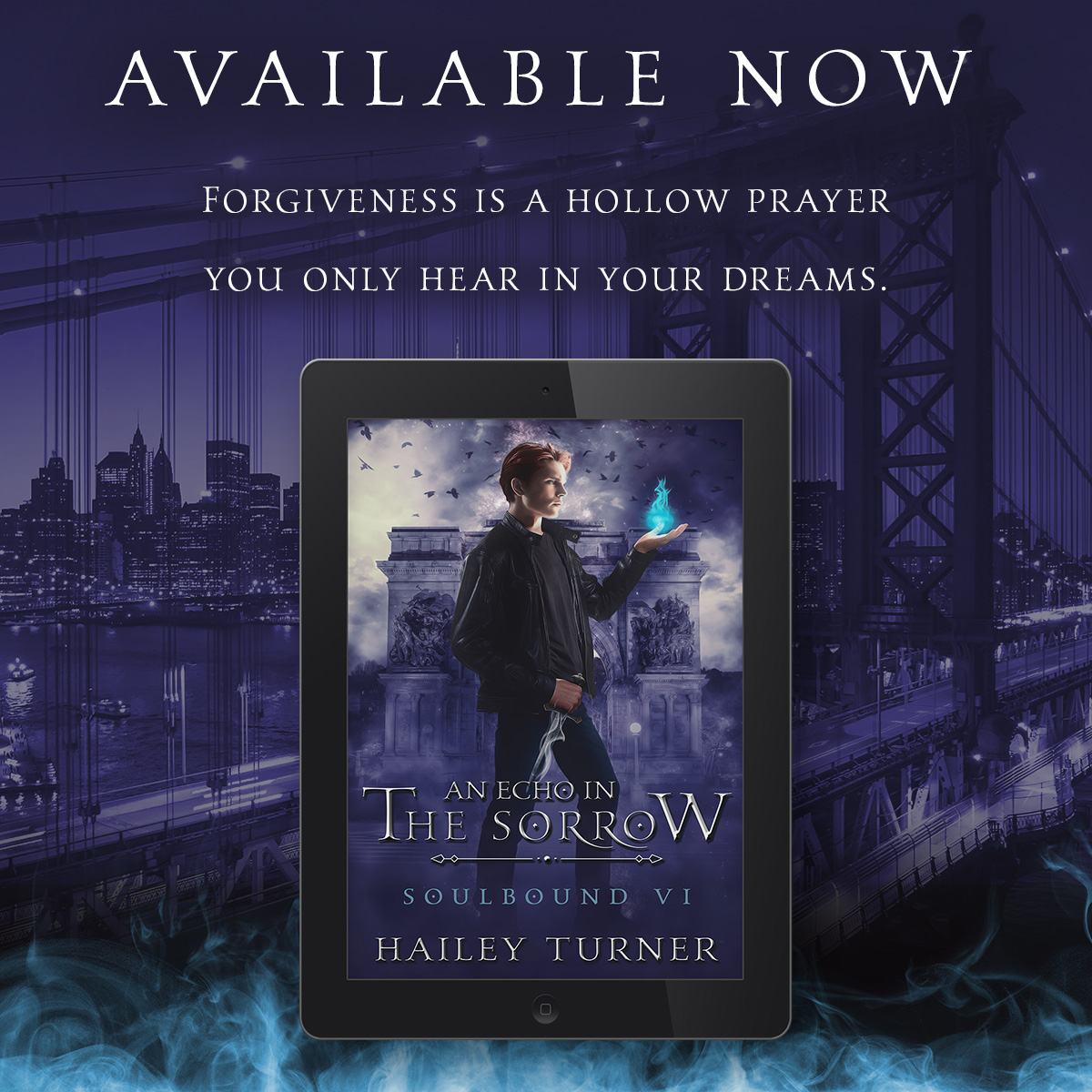 Wade fidgeted beside him on the platform, eyes glued to the screen of his mobile as he played a game. “Do I need to sit in with you during the meeting?”

“You aren’t wandering downtown, if that’s what you’re hoping for,” Jono said.

“What if Sage’s office is out of Pop-Tarts?”

“You know the rules. No running off on your own right now.”

Wade scowled down at his game. “Ugh.”

Jono ignored Wade’s sulking, too busy keeping an eye on everyone else around them. He kept his guard up, not trusting the people scattered on the platform. Jono didn’t smell anything out of the ordinary, but that didn’t mean they were safe. Yesterday had proven Estelle and Youssef were now eschewing indirect, under the cover of darkness attacks in favor of direct hits targeted for maximum damage.

The C train rolled into the station with a rumbling engine and the squeal of brakes some ten minutes later. Faces of people inside the train flashed by as it came to a loud stop. The doors slid open, allowing passengers to exit and enter the cars. Jono and Wade stepped into a car, and he guided Wade toward the middle, sliding past other passengers who barely shifted out of their way.

Wade elbowed people aside and ignored the dirty looks thrown at him. Jono despaired of him ever learning manners.

The benches in the train car were all filled, so they were relegated to standing, holding on to the overhead bar to help keep their balance. The train started up again with a rattle on the tracks, lurching forward. Jono swayed a little where he stood, scanning the train car, gaze flicking over faces. Nothing seemed or smelled out of the ordinary as the train headed downtown, but he didn’t trust the sense of ordinariness. Wade kept his eyes glued to his mobile, playing his game with one hand.

The train car was almost too warm, even for Jono, though Wade was obviously fine. Almost every subway he’d ever ridden didn’t have air-conditioning, but the stifling heat was manageable for short periods. With no delays, it wouldn’t take long for them to get to their stop downtown.

The train rolled through two more stops, with people getting on and off, the shift in scents washing through the enclosed air. The busker who came on board at the last stop was very clearly fae going by scent, even if his glamour was that of a human. Jono had gotten better over the months at sniffing out fae due to their alliance.

Jono picked up hints of magic users and other people of the preternatural bent in the car they were on. Nothing worried him until they left the 14th Street Station and the shadows of the tunnel beyond the windows sparked with magic when they shouldn’t.

Jono tightened his grip on the overhead bar, going tense as he stared into the dark, emergency lights occasionally streaking by. The smell of magic got sharper, tickling his nose. Few others seemed to notice the shift in the air—Wade, whose head snapped up, the fae busker, and a teenaged girl at the other end of the car. Everyone else was minding their own business, and all Jono wanted to do was get off the bloody train.

“Something feels weird,” Wade said as he put away his mobile.

“Should’ve got a bloody ride,” Jono said under his breath.

Someone slipped through the crowd to stand beside Jono, carrying with them the crackling taste of ozone that burned the back of Jono’s throat when he breathed. Strange yellow eyes he’d seen only once a year ago stared back at him in a weathered face framed by two thick braids. The immortal’s jeans were faded, and Jono couldn’t make out the design on his T-shirt since it was hidden beneath a breastplate made out of white bone beads.

No one else on the train paid them any attention at all, though Jono wondered if humanity would ever recognize the gods who walked amongst them.

“It’s a shame the spirits of my children don’t get along,” Áłtsé Hashké said, mustache twitching above his lips as he smiled.

Wade grabbed Jono’s arm with tight fingers, but Jono held up his hand to ward off whatever the teen was going to yell about. “Shut it.”

“Well aware of that. Shut your gob.” Jono kept his attention focused on the god. “What do you—”

The train lurched to a sudden halt, brakes squealing so loudly Jono had to dial down his hearing. The force of the stop pitched people out of their seats and onto the floor with no warning. People standing staggered about, trying to stay upright, while others fell on top of people sprawled on the dirty floor.

About the Author: Hailey Turner is a big city girl who spoils her cats rotten and has a
demanding day job that she loves, but not as much as she loves writing. She&#39;s been writing since she was a young child and enjoys reading almost as much as creating a new story.