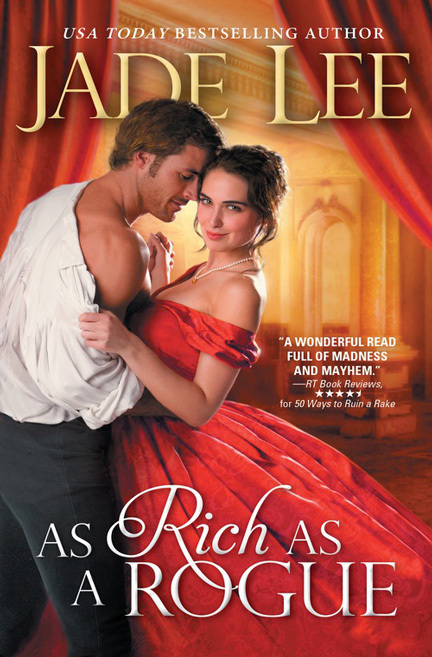 An exclusive excerpt and giveway of Jade Lee’s AS RICH AS A ROGUE.  ♥♥  Lord Whitly and Miss Mari Powel have history. Six years ago he gave her the nickname Wayward Welsh and that has dogged her so much that she can’t find a husband. Now the blighter has returned and is courting her when she can barely keep herself from scratching out his eyes. In this scene, she’s just fallen off her horse in shock because he proposed at a very wrong moment. Lord Whitly and Miss Mari Powel have history. Six years ago he gave her the nickname Wayward Welsh and that has dogged her so much that she can’t find a husband. Now the blighter has returned and is courting her when she can barely keep herself from scratching out his eyes. In this scene, she’s just fallen off her horse in shock because he proposed at a very wrong moment.

“Is your chest tight?” he asked. “Is there pain or numbness? Does your head hurt?”

She glared down at her feet. “I landed on my—” She cut off her words. “On the softest part of me.”

Hardly, since as far as he could tell, she fell on her bum and not her breasts. But that was not an appropri- ate thought, so he did his best not to look at those lush mounds so near him.

“Nothing is hurt except my pride.” She tucked her feet under her, and he held out his hand to help her up. He thought for a hideous moment that she would disdain even that, but she grabbed it quickly enough. Then he pulled her easily to her feet.

“Let’s walk this way, shall we?” He gestured to an empty pathway.

“So long as it’s away from here, I shall be delighted.”

He watched her gaze travel over their onlookers. He saw her mouth pinch tight and her cheeks color, but she didn’t say more.

“Don’t worry. People fall off their horses all the time.”

She slanted him a defeated expression. “Why yes, I’m sure it happens hourly. Someone somewhere in the world falls off a horse every hour. Today was just my turn.” She began moving away slowly. “I just chose to do it in front of the horse-mad set.” Then she looked to her left and winced.

“And he offended you?”

She snorted, but the sound came out more as a mournful laugh. “No. I shall simply have to cross him off my list of potential husbands.”

He frowned. “Mr. Percy Randall? The horse-mad puppy with delusions of oratory genius?”

She turned to him. “You know him.” It wasn’t a question.

“We all know him. His attempts to match his father’s eloquence have been the subject of laughter since he was in school.” He cut off his words there, but that didn’t silence his thoughts. The woman was considering Percy Randall, a braying ass if ever there was one, but she fell off her horse rather than accept him?

“I thought I could help him,” she said almost too softly to hear.

At which point, his temper snapped. They’d walked far enough to be relatively private, so he drew to a stop and touched her arm. He wanted to grab it and haul her around, but he did not.

“I will have an explanation, Miss Powel, or I will drag you to the nearest doctor, for you are obviously concussed.”

She gaped at him. “Concussed? Because I didn’t accept your proposal?”

“Because you fell off your horse rather than accept it. And yet you’d willfully consider an idiot like Percy Randall!”

She dropped her hands onto her hips and faced him squarely. “Percy Randall has a temperate nature—”

“Unless you damage his horses.”

“He will be in the House of Commons soon.”

“And his father is a brilliant, influential man.”

“What the bloody difference does that make?”

She huffed out a breath. “I could help him. Host political salons. Aid his work against slavery. Any number of things.”

“Then you should marry the father.”

She threw up her hands. “He already has a wife.”

“I don’t,” he snapped. “I don’t have a wife, I will  inherit an earldom, and my conversation is about more than horseflesh spoken in a stutter.”

She pressed her lips together in a mulish pout, but a second later she was off defending that ass again. “He doesn’t stutter often. Just when he’s at a loss for words.”

“Which happens whenever he speaks about anything but his damned horses.”

She huffed out a breath and turned to look behind them, presumably at Percy, but Peter had had enough of this ridiculous conversation. It was merely a way to avoid speaking of his proposal. So rather than let it continue, he caught her chin between his thumb and forefinger and drew her face around to his.

“Percy hasn’t proposed, Miss Powel. I did. And I will have an answer.” As Rich as a Rogue

Mari Powel’s fiery Welsh temper is up. Peter Norwood, Lord Whitly, is back in town after six years romping around India making his fortune. Mari blames him for her social downfall and has spent all this time clawing her way back into the ton’s good graces. How dare he show up on his first day back and publicly embroil her in a bet involving long-awaited apologies, illicit kisses, and Lady Illston’s unruly parakeet? Mari is outraged, and is going to show him—and everyone else—what she’s made of. Little does she know, the unrepentant Lord Whitly has been dreaming of her all this time. Now he’ll do anything to win the wager—along with Mari’s heart.

USA Today bestselling author Jade Lee has been crafting love stories since she first picked up a set of paper dolls. Ballgowns and rakish lords caught her attention early (thank you Georgette Heyer), and her fascination with the Regency began. An author of more than 40 romance novels and winner of dozens of reader awards, she brings laughter into the sexy nights of England’s elite. Quirky characters and sexy banter are her hallmarks. Find out more at her website www.JadeLeeAuthor.com, or check out her wild contemporary half at www.KathyLyons.com.