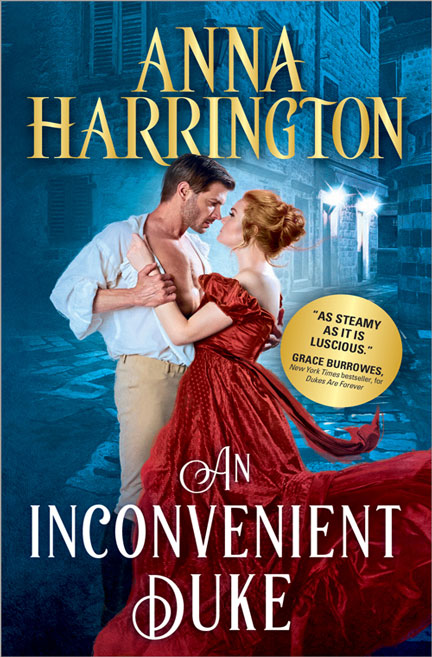 In Anna Harrington’s AN INCONVENIENT DUKE, all’s fair in war…and in love… All’s fair in war…and in love…

Danielle is keeping deadly secrets of her own. She has dedicated her life to a charity that helps abused women—the same charity Elise was working for the night she died. When Danielle’s work puts her life in danger, Marcus comes to her rescue. But Danielle may not be the one in need of rescuing…

Marcus twirled Dani through a circle so unexpectedly that she glanced up at him, startled by the movement.

“Elise was too good of a horsewoman to be thrown from her mare. Certainly not on a morning trot through the park. Especially when the groom said she didn’t go out on horseback at all that morning.” His gaze fixed on hers with a hardness that told her he’d brook no dissembling. “So let’s start over with the truth, shall we?”

“I did tell you the truth! I told you everything that the guards…” As her voice faded, the confusion on her beautiful face melted into anguish.

Her reaction pierced him. She certainly wasn’t pretending the emotions behind that. Not even an actress at the Theatre Royal would have been good enough to fake such raw pain and sorrow.

Fresh guilt assaulted him. Good God, did she truly not know? Had it never occurred to her that Elise’s death hadn’t happened at all the way she’d claimed?

He searched her face for answers. “You didn’t know that she’d left Charlton Place at night, alone, to meet a man?”

“No. Or I would have stopped her.”

Looking at her now, hearing the resolve in her voice, that he very much believed. “And John Porter?”

A bitter taste rose on his tongue. “Was he her lover?”

“No! Elise would never…”

Her cheeks flushed, and she glanced away in embarrassment. Danielle might have blossomed into a woman while he’d been away, but her reluctance to put to words that his sister had taken a lover assured him that she was still innocent. He had no idea why he should care, but he thanked God that some things hadn’t changed.

“Why else would a widow meet up alone with a man at night?”

“Not for that.” Irritation sparked in her eyes that he would assume that of his sister. Despite himself, a warmth blossomed in his chest at her defense of Elise’s reputation. “Not her.”

His fingers tightened around hers as he continued to waltz her around the room. “Are you certain she wasn’t planning to elope?”

She gaped at him, thunderstruck. “What on earth makes you think that?”

“In his note, Porter wrote that everything was set for their vanishing that night.”

She blanched and missed a step. If his arms weren’t around her, she would have stumbled again. She rasped out hoarsely as she hurried back into step with him, “A vanishing?”

The way she repeated that, her haunted expression—Good God. Instantly, his blood froze. “You know more than you’re telling.”

She gave a fierce shake of her head. “I didn’t know about any of this!”

“Did she die on the way to meet him or coming back?” His gaze narrowed, watching her closely as he dared to finally put voice to his fears. “Or did he murder her?”

She gasped, the strangled sound so pained that he flinched. “Murder?” The word came as barely any sound at all on her lips, and she began to tremble, so hard that she nearly shuddered in his arms. “Oh, God…Elise…”

“So I’ll ask again.” He twirled her through a tight circle, one meant to keep her off-balance. “Who is John Porter?”

“What did he mean by their vanishing?”

She fiercely shook her head. “I don’t—”

At that, she halted right there in his arms, smack in the middle of the dance floor, bringing him to a stop with her. For one fleeting heartbeat, he saw fear grip her face, the same fear he’d seen on every man under his command the first time they’d charged into battle.

Then it was gone, and in its place came anger.

“How dare you?” Outrage filled her voice. “This is why you asked me to waltz? Not as an old friend of the family, not even to commiserate together in our grief—this dance was nothing but the battle strategy of a war-hardened general, to keep me from fleeing while you interrogated me!”

“My sister was murdered, and I’m damned well going to find out why.” His own anger flared in response, yet he was aware of the crowded dance floor around them and kept his face carefully inscrutable. “John Porter warned Elise to stay away from Scepter.” He searched her face for answers. “Tell me what you know about them. What is it? Where can I find the people running it?”

“I don’t know.” The icy look she gave him was one of absolute obstinacy. “And for your sake, General,” she said, her eyes practically glowing, “I wouldn’t tell you even if I did.”

He clenched his jaw. “I need to know what you’re hiding about—”

“Stop!” she ordered hoarsely, pushing herself free of his arms. “Please. Just stop.”

As the other couples continued to dance on around them, the attention of the room fell upon them, and everyone craned their necks to see what was wrong. But Marcus didn’t care that whispers went up at the scene they were making or that Claudia now stood in the doorway, watching them curiously. Danielle Williams knew more than she was admitting. Far more. He wouldn’t stop pressing until he had the entire truth and brought to justice the man responsible.

The waltz ended, and the last notes died with a flourish. When she stepped back, he had no choice except to let her go.

But this conversation was far from over.

Aware of the attention of the crowd still upon them and clearly wanting to lessen the spectacle they were making of themselves, she held out her hand and dropped into a curtsy as if nothing were wrong.

“Your sister was a good woman who dedicated her life to helping those in need,” she said between deep inhalations as she gathered herself enough to put a smile onto her face for the crowd around them. “Keep that memory, and let the rest go. I beg you.”

He took her hand and bowed over it, attempting to appear as if they were simply finishing the waltz. He murmured against her fingers, “I have no intention of letting this go.”

Anna Harrington is an award-winning author of Regency romance. Anna was nominated for a RITA in 2017 and won the 2016 Maggie Award for Best Historical Romance. The Secret Life of Scoundrels. A lover of all things chocolate and coffee, when she’s not hard at work writing her next book or planning her next series, Anna loves to fly airplanes, go ballroom dancing, or tend her roses. She is an English professor in Chattanooga, Tennessee.  Author Website:  https://www.annaharringtonbooks.com/