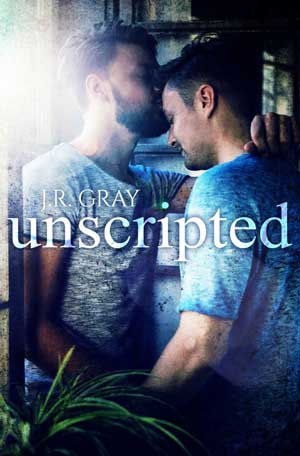 An interview with J.R. Gray, author of Unscripted and Rewritten.

I’m J.R. Gray and I am so excited to share with you Unscripted and Rewritten. These two books are so important to me. Between the tropes and the feelings I put into these characters, they are two of my favorite I’ve ever written. An Interview with J.R. Gray

Have you always wanted to be a writer?

I didn’t want to be a writer. I had no intention of ever publishing. I wanted to be a pilot and I am a commercial pilot. But I’ve always written, as long as I could remember I would have characters in my head and makeup stories to tell my siblings. As a small child, I had an imaginary alien race I would go on adventures with at night and recant those stories to anyone who would listen during the day, but it wasn’t only my adventure with them. I loved to world-build before I even understood what world-building was I was explaining to people how these aliens ranked planets and ours was quite low which is why more aliens didn’t visit and how the universe was structured. For a long time in my teens and twenties, I never finished anything. I like new and shiny stories, I like creating characters and worlds but finishing usually bored me because I knew how they ended by the time I got halfway through something so I’d stop and move on to work on another puzzle for my brain. Then in my late twenties, I wanted to finish. I wanted to see if I could push myself to do it. I have a lifelong ambition of trying to better myself and that year I chose finishing. So I finished a few books and put them aside. Well, after I had finished about five books I had a friend who found out I wrote and begged and begged to read something. So I sent her the one I’d just finished, Legally Bound, and she read it and told me I had to publish it. I kind of laughed it off but agreed to try and I sent it to a few small publishers. Three out of five said yes, and well the rest is history.

What, in your opinion, are the most important elements of good writing?

What comes first, the plot or characters?

I think this happens to me differently than most people. I get characters in a situation. So they come to me as people. I pull details out of them but they are there and I get to know them by writing them as much as my readers do and usually they present themselves in an issue. Like with Unscripted, Quell came to me falling in love with his co-star who thought he was a straight married guy. Like I said in my first question, my brain likes to work on these problems. It’s what I sit around doing. So I sit with myself when I can’t sleep or when I’m doing anything that doesn’t require full concentration, or sometimes when I should be concentrating, and work out these stories in my mind. My brain likes to work out the story and create all the time. I don’t think I could stop even if I decided not to publish anymore. It’s something I’ve always done and it’s a type of therapy to me. I create and work out stuff in my mind and it helps me let go of things usually.

How do you do research for your books?

I love to research. Love it. I love to go to the library and rent stacks and stacks of books on a topic and read everything there is as I’m writing. I love to read articles and watch youtube videos. For Unscripted and Rewritten I had the best time watching youtube interviews between actors who played across from one another. One of my favorite pairs to watch are Taron Egerton and Richard Madden. Those two have so much chemistry as friends and a massive part of me was hoping they’d end up dating after filming Rocketman. I also went back and read a ton of celebrity gossip magazines from the Brangelina days trying to get a feel for how the media portrays prolific couples so I could get the feel right for Rewritten.

When you’re writing an emotionally draining (or sexy, or sad, etc) scene, how do you get in the mood?

My secret to this is I don’t write in order. I only work on what I’m feeling at the time. I like to put a lot of emotion and feeling into my books. Sometimes books require a certain headspace and I’ve had to stay in those headspaces to finish them. While writing Rewritten I struggled at times with Quell’s depressed headspace so the book took me a long time to write. I usually make a playlist which helps me get back into the right mood for scenes and to create an overall feel of the book.

Do you have a favorite character that you have written?

Quell by far has been my favorite book character. I love honest and raw characters and his depression is so personal to me. I used a lot of my own experience with my own depression to write him. He’s one of those characters I just want to wrap up and take care of.

Another favorite of mine is Zac from my Bound series. He’s so much fun to write. He’s a funny ball of extrovert who doesn’t like to live by anyone else’s rules. I never know what to expect while writing him.

I have a new favorite after writing Rewritten, Tobias. He was an unexpected side character who ended up being so full and fun to write and very loud in my head. He doesn’t like to be quiet. I think he’s going to end up with his own book.

Movie star 102: The headlines are never what they seem.

Quellcrist wasn’t new to fame or the effect it had on a relationship. He’d been married in the spotlight for as long as he’d been famous. But that was before Hale. He knew it was going to test him but even he hadn’t known the toll that months apart would take on his fledgling relationship.

Long days of shooting, different time zones, calls every day dwindled to days without calls, and rumors were all over the rags. Through it all Quell had to battle his own worst enemy but he didn’t know how to win against something inside him. Depression ate him whole and pain took over.

There was so much more at stake than losing his boyfriend, he was losing his best friend. His lifeline, the love of his life. Was there any way to come back from the damage done?

Can they rewrite their ending?

“What a morning.” Quell grabbed a robe and slipped it on, leaving it untied as we headed towards the kitchen.

“What because you’re internet gay or because my dick is being talked about on TMZ?”

“Both. I really do want to see what they are saying about you.” He started the coffee pot and turned to lean against the counter.

I already had my phone out and was pulling up twitter. “I have a shit load of tags.”

“They are tagging you in this shit?” He looked a little annoyed on my behalf.

“Oh yeah, and #HalesPackage is trending.” I turned my phone around to show him and it was back to laughing. “Mark wasn’t kidding. This has turned into a monster.”

“I know what your next birthday gift is!”

“I’m not sure I want to know with that look on your face.” I stuck my phone back in my pocket and got down mugs.

“I’m going to find the best ones and print them and get them framed for the office.”

I scrubbed a hand over my face. “The sad part is I know you probably will.”

“Fuck yes. It’s the gift that keeps on giving.” His joy was contagious. I wanted to take pieces of it and save it for rainy days.

I etched it into my memory, knowing I would keep it all close to my heart.

“For you. You should do it for your own birthday.” I took the coffee he set in front of me and followed him out to our deck.

He took a seat in one of the chairs and kicked his feet up. I sat in the chair next to him and ran a hand over his shin. This was intimacy. Little moments with him. My heart ached at the idea of  being separated from for so long in only a few days.

“I’m going to dig through this tag,” Quell said, pulling out his phone after smiling at me.

“Of course you are. Don’t favorite any of them.” I pulled up TMZ instead. I wanted to see what kinds of things were being said. It was probably the worst thing to be doing but I couldn’t stop myself. I was curious and I knew it would be eating me alive if I didn’t

“Why not?” he asked, laughing.

“Are you serious? Do you realize that will be top news? If Quellcrist King is faving thirst tweets about me?”

I glanced over, blinking at him. “A few weeks?”

He shrugged, giving me a wink. “We’ll see how public stuff goes.”

About J.R. Gray: Gray is a cynical Chicago native, who drinks coffee all day, barely sleeps, and is a little too fashion obsessed. He writes realistic and damaged characters because everyone deserves a happily ever after.

Giveaway: To celebrate the release of REWRITTEN, J.R. Gray is celebrating with an Instagram Spotlight Tour and Giveaway. Check out the hashtag, #RewrittenTour, on Instagram, comment on any host photos by tagging a friend, and you’re entered to win e-copies of book 1 in the series, UNSCRIPTED. All details are here: instagram.com/anoveltakepr