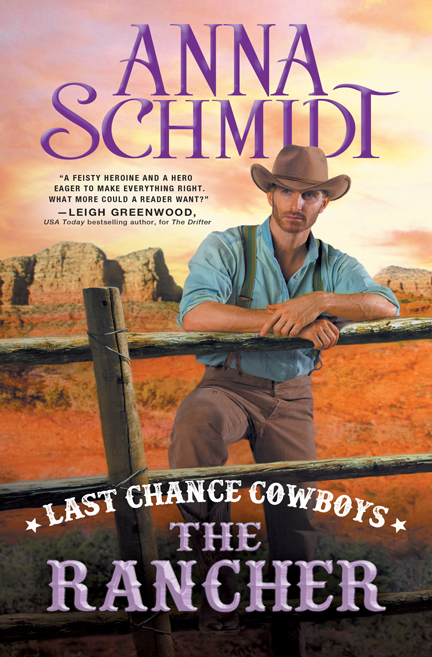 In Anna Schmidt’s LAST CHANCE COWBOYS: THE RANCHER, the world is changing, and the West isn’t as wild as it used to be. Trey Porterfield welcomes a new era of law and order—and the influx of settlers coming to the Arizona territory. But not everyone is willing to see the old ways change, and as the cattlemen and the herders take sides, a full-blown range war may be inevitable. There’s only one way Trey can see to bring peace to his feuding neighbors. Series: Where the Trail Ends, #4

“You can’t be sure we’re doing the right thing,” she said.

He drew closer to the barbed wire separating them. “It’s impossible to know what’s right. But it doesn’t stop me from wanting you.”

The world is changing, and the West isn’t as wild as it used to be. Trey Porterfield welcomes a new era of law and order—and the influx of settlers coming to the Arizona territory. But not everyone is willing to see the old ways change, and as the cattlemen and the herders take sides, a full-blown range war may be inevitable. There’s only one way Trey can see to bring peace to his feuding neighbors.

Nell Stokes is a young widow fighting just to stay alive. In Trey, she sees a chance to heal old wounds and start over. Love was never in the cards, yet as Trey and Nell fight to unite the feuding land, they’ll discover a passion neither could have expected…and a danger far greater than either has ever known.

Nell  saw a single rider in the distance…; she felt a shiver of fear.

“Go in the house, son,” she said softly.

“Should I bring you Pa’s gun?” Joshua asked.

Joshua did not argue.

Nell continued the repair work she’d begun on the chicken coop the raiders had destroyed.

As the man came closer she saw that he was tall—taller than Calvin had been. He wore brown trousers, a faded blue shirt, a tan suede vest and a battered Stetson that looked as if it had seen its fair share of bad weather and hard use. She thought of the hat she had saved up to buy for Calvin last Christmas—the hat she had placed on account at Miss McNew’s dry goods store in Whitman Falls, paying it off a little each time she went into town. The hat she had never gone back to pay off and collect. There seemed little reason to do so now.

She tightened her grip on the ax she was using to hammer the chicken wire into place, her mind racing. She needed to come up with a plan for protecting herself and Joshua should the man not be alone. She glanced around, searching for any sign of other riders who might plan to come at her from all directions.

This was a cowboy—that much was evident. He rode a large stallion and there was a coil of rope fastened to the horn of his saddle and a holstered gun strapped onto his waist.  The man was taking his time, and that frightened her more than if he had come riding into the yard at a full gallop.

“Can I help you, Mister?” she shouted, shielding her eyes with one hand even as she kept a tight hold on the short-handled ax with the other.

He reined his horse to a stop and dismounted. To her surprise he removed his hat as he approached her. “Mrs. Stokes?”

She planted her feet and faced him. “Who’s asking?”

His lips quirked into the beginning of a smile, but he squelched that by squinting into the sun behind her. “Name’s Trey Porterfield. My sister-in-law Addie’s the doctor in Whitman Falls.”

This was the man Addie had told Joshua about? This tall robust cowboy who looked like he’d never been sick a day in his life?

He rolled his hat in his hands. “Not exactly. She has talked a good deal about your boy. Seems to think we might have something in common. I was pretty sickly as a kid myself.”

“Then there’s the fact that my pa died when I wasn’t much older than your son.”

“Joshua’s father was murdered,” she replied in a low growl that did nothing to disguise her rage.

“So was mine,” he said softly and she realized he was now focusing all of his attention on her.

“I’m sorry for your loss,” she said and glanced toward the coop. “I’ve got work to do here, Mr. Porterfield. Thank you for stopping by. It was kind of you.”

“How ‘bout I finish that coop for you?” He waited a beat, then grinned, “I don’t charge much—just a tall glass of water. That sun’s already hot enough for it to be July and here it is not even May.”

Nell wrestled with the urge that came over her to return his smile, to lower her guard after months of always expecting the worst. But she had been through enough to know trusting a cattleman—trusting any man—was a dangerous business. “You can fill your canteen in the stream over there before you head back,” she said. “I can manage the coop.”

From the corner of her eye she saw Joshua had eased out onto the front stoop and was watching the exchange.

“That your boy there?” Instead of being insulted at the rejection and stalking off as she had expected, Trey Porterfield remained standing a few feet from her. He even raised his hand in greeting to Joshua.

A lump of fear hardened in her throat and for the first time ever, she wished that Henry or one of his sons—or even Ernest—was around. “What is it you want, mister?” The words came out in a whisper. She could make no sense of his presence and therefore could only think that his taking notice of Joshua was somehow a threat.

Something in her expression must have revealed her distress because he took a step back, holding up his hands as if to calm her, then he put on his hat and mounted his horse. “I mean you and your son no harm, Mrs. Stokes. Addie has…I was in the area and….”

“Thank you for coming by,” she managed as she forced herself to turn away and give the appearance of working to repair the coop again. But in reality she gripped the ax handle and listened for his horse to retreat. If he rode toward her or the house, she would sling the ax at the horse. She imagined the horse injured and perhaps rolling over the rider, giving her time to make it to the house and Joshua—and Calvin’s shotgun.

When she heard the horse walk away, then break into a trot that faded with the distance between them, she let out a breath and with it some of the knot of fear that had threatened to paralyze her. Her eyes filled with tears and for the thousandth time since Calvin’s death she wondered what kind of future lay ahead for her and Joshua. Was she being foolhardy by insisting they stay and carry on Calvin’s dream? The ax fell from her trembling fingers and she knew that her thought of throwing it at the horse had been nothing more than the fantasy of a desperate woman.

Award-winning author ANNA SCHMIDT delights in creating stories where her characters must wrestle with the challenges of their times. Critics have consistently praised Schmidt for her ability to seamlessly integrate actual events with her fictional characters to produce strong tales of hope and love in the face of seemingly insurmountable obstacles. She resides in Wisconsin.

Enter to win a copy of Last Chance Cowboys: The Outlaw by Anna Schmidt!