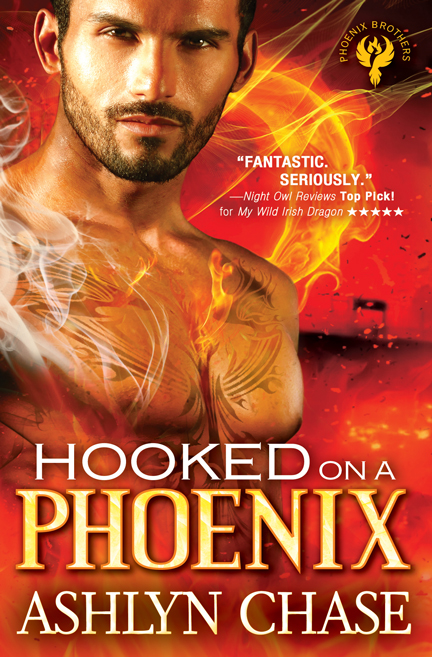 HOOKED ON A PHOENIX by Ashlyn Chase

Locked in a bank vault together, they might redefine the meaning of “safe” sex

Gabe Fierro is a firefighter—and a phoenix. Like his brothers, his biggest challenge is finding a woman open-minded enough to accept a shapeshifter into her life. When his boyhood friend asks him to watch over his little sister Misty, he reluctantly agrees. But when the bank where she works gets held up, Gabe does everything he can to protect her. The two of them end up locked in the bank’s vault…where things get steamier than either of them ever imagined. LOCKED IN A BANK VAULT TOGETHER

Misty Carlisle works as a bank teller in Boston’s financial district. She’s had more rotten luck in her life than most, except when her childhood crush shows up to cash his paycheck. Then her heart races and her mouth goes dry.

Gabe Fierro is a firefighter—and a phoenix. Like his brothers, his biggest challenge is finding a woman open-minded enough to accept a shapeshifter into her life. When his boyhood friend asks him to watch over his little sister Misty, he reluctantly agrees. But when the bank where she works gets held up, Gabe does everything he can to protect her. The two of them end up locked in the bank’s vault…where things get steamier than either of them ever imagined.

“Holy shit!” Gabe exclaimed. “Is that Parker?”
Parker whirled around and met his best friend coming up the walk. They gave each other a man hug with many slaps on the back.

“Good to see you! Hey, Julie, I didn’t realize you knew Gabe.”

“I don’t. Well, not really. I thought he was a stripper, and then he ran off before proper introductions could be made.”

“Jeez, Julie,” Misty interjected. “It’s not what it sounds like. I was having a party at my apartment for Julie and my friends from high school, and Gabe just showed up to check on me. I thought he was the pizza delivery guy and went into the other room to get my wallet and, well…the girls thought I had arranged something else—which I didn’t, by the way.”

Parker laughed hard. “So, I guess you’re still looking after my little sister, Gabe. Thanks.”

“What are you doing here?” Gabe asked. “Did you get emergency leave when you heard that Misty’s house blew up?”

Parker took a step back. He grabbed Misty’s arm. “Your house blew up? How? When? Why didn’t you tell me?”

“I was going to. It just happened, and there was a lot of other stuff going on.” She realized she’d inadvertently introduced subjects she didn’t want to get into just yet. “Hey, let’s go inside. Why are we all standing in the foyer with the door open? It’s February, for God’s sake.” She grabbed Parker’s hand and tugged him inside.

As soon as Gabe had closed the door, she quickly addressed Parker’s concerns. “It was a gas leak. Gabe saved both me and my landlady. He was in the hospital, knocked unconscious for a while.” There. Put the focus on Gabe. That should buy her a little time.

Parker let go of Misty and clamped his hand on Gabe’s shoulder. “I knew I could count on you, man. Thank God you were there.”

Gabe offered a weak smile. Maybe he was just being humble, or maybe he didn’t want Parker to know how close they had become. Either way, it was time for another distraction.

“Let’s get out of the chilly hallway.” Misty made a point of shivering.

Julie laughed. “No shit. If my father were here, he would have yelled, ‘Do you want to heat the whole damn neighborhood?’ ten minutes ago. Let’s go into the kitchen where it’s warm. I’ll make some coffee.”

They all tromped into the kitchen and found seats at the round glass table in the corner.

“I’m a squatter. Sort of. My folks are in Germany. My dad got transferred, and they’re looking at houses. Until they buy one, they won’t put this one on the market. I get to live here until the new owners evict me.”

Misty brightened. “Maybe you and I can get a place in the city when they sell this out from under you.”

“What do you mean?” Gabe asked.

Parker laughed. “When these two get together, you never know who’s going to call you. The towing company, the cops, or—”

Gabe held up his palm. “I don’t need to know the details.” He gave Misty the hairy eyeball.

“Hey, we’re not that bad.” Julie giggled as she filled the coffeepot with water. “At least we’re no
longer underage.”

Nothing to be concerned about. But what does concern me is where are you living now, Misty? Can you get to your job from here—or wherever?”

“The Fierros took me in. I just have to commute from the South End to the North End. It’s nothing the subway and a CharlieCard can’t handle.”

Parker glanced at Gabe. “You’re still at your place near the theater district and Chinatown, right?”

Misty sensed her brother’s discomfort. Or maybe it was her own worry she was projecting. Parker obviously didn’t want them together. She and Gabe shared a quick glance and looked away.

Julie joined them at the table while the coffee was brewing. “Hmmm… Something is going on here.” She pointed to the other three in turn.

“Oh? Is there something I should know?” Parker asked.

Oh, crap. Julie was always too observant and never could shut the hell up. Misty had to get her brother and Gabe alone and tell them her news soon—before Julie blurted it out at the worst possible moment.

“Julie, can you please give us some time alone?”

Julie straightened and looked offended. “You don’t want me here? I would think you might need my support.”

“No! What I need is for you to disappear for a few minutes.” Misty felt bad as soon as she raised her voice to her friend, but it had to be done. Her well-meaning friend would probably add her two cents and just complicate things.

“Fine.” She sounded hurt as she rose and stomped out of the room. “When the coffee is ready, you can help yourselves.”

“I’m sorry,” Misty called after her.

“No, you’re not, but you might be when I’m not there to help you figure out what you’re going to say.” Julie’s voice trailed off, but it looked as if the guys caught the gist of it.

“What’s she talking about?” Parker asked.

Misty leaned back and crossed her arms. “There’s something I have to tell you. Both of you. I didn’t want to do it here, like this, but it seems like I have no choice now.”

Parker narrowed his eyes. “Spit it out, Misty. What did you do?”

She straightened and glared at her brother. “What makes you think I did something?”

“Whoa. Relax, Parker,” Gabe said. “Misty hasn’t done anything. She’s had some bad news, and if you’ll just shut up, she’ll tell you what it is.”

Gabe was trying to help, probably thinking she had to tell him about the MS. Boy, was he in for a rude shock.