You please tell us a little bit about your current projects?

My current release, Me+You is part of The Wild Rose Press’s Valentine-themed Candy Hearts Romance series. Each book is titled after a saying on the Sweetheart Valentine’s candies. I thought it would be fun to incorporate into my story the plus sign, and so I created a situation where the heroine, a teacher, and the hero, a divorced father, have to try to figure out why a child is unable to comprehend math.

I don’t ever remember not wanting to write. (Cliché, sorry.) I was always one of those geeky kids in school who just loved the requisite return-to-school assignment “How I Spent My Summer Vacation” (and other fairy tales). In high school, one of my favorite pastimes with my best friend was to take a first sentence and then go off and write a story. It’s amazing how widely our imaginations diverged from that common starting point.

After receiving my Masters’ degree in Journalism, I spent over 20 years working in corporate communications, primarily for national non-profit associations, where my days were full of writing newsletter articles, writing reports, writing media releases, and writing web site content. Yes, I was writing for a living, but I didn’t feel fulfilled. Somewhere along the way, I had lost myself and with nothing to do, my creative muse had gone on a long vacation.

That changed when a friend suggested I start writing for myself, again. With two young kids and a full-time career, her advice was easier said than done, and for a few years I puttered away at a story. Finally, my friend said I had to stop approaching fiction-writing like a “guilty pleasure” and aim to write for publication as I did with all my other writing assignments. So I joined the Ottawa Romance Writers’ Association and entered its First Meet writing contest. I placed second and my prize was a critique of the first three chapters of my manuscript by a published author writing in the same genre. Yikes! I had only written a few random scenes at this point. So I knuckled down and wrote the three chapters, and then I wrote the rest of the book.

Although I had been making my living by writing for over 20 years, with the publication of my first book, Soldier for Love, in 2008, I finally felt I was a writer.

The best advice I’ve ever received came from literary agent Steven Axelrod at the Romance Writers of America conference a few years ago. He said the best thing an author can do for her career is to write the next book. I don’t think this advice is unique to him, but at the time, my first book had just been released and I was immersed in the promotion and marketing game. His point is that while authors need to promote their work, they need to realize that time spent promoting is time away from their main job, writing.

For Christmas I was given the Outlander coloring book and a set of colored pencils. When I was a kid I used to spend hours coloring intricately patterned pictures, so I’m very excited to dive into this not-so-new hobby; maybe while listening to music or an audio book.

I have a confession to make: Fall is my favorite time of year. That may sound like a pretty tame admission, but I expect almost everyone that knows me would be surprised to hear it. To them, I am known as a lover of the heat—sunshine and hot, humid days are what I prefer, it’s true.

I live in Ottawa, Canada, where winter seems to last nine months of the year. The only warm weather we can expect is in the months of June, July and August, and even then it’s not always a guarantee. As a result, I spent much of the year wrapped in a blanket beside a roaring fire and dreaming of long sultry summer days. I think about the pool parties and barbeques, the long evening walks, and the possible spontaneity if I don’t have to don ten layers of clothing just to leave the house.

But there’s something anti-climactic about summer when it finally arrives; it never quite lives up to expectations. The kids aren’t in school and they have their own plans. Bedtimes and mealtimes are irregular, and the long-awaited vacation is hectic and rushed. So it is with tremendous relief that when September arrives, routine returns, and activities and friendships that were suspended over the summer are resumed and renewed.

Washing machine. I can’t imagine doing laundry for a family without one.

I’ve decided to step out of my comfort zone and work on a women’s fiction story set in the 1930s. It is based loosely on a family legend I’ve heard since I was a child. It is going to be a bit of a challenge because I’m used to my heroines living with all the modern conveniences I’m accustomed to. In addition, the role of and attitude towards women was very different at that time. Of course, my heroine isn’t going to be your typical fainting female. She’s a strong-willed, single mother who is forced to choose between risking her son’s future by exposing a crime or staying quiet and continuing to live very well of its spoils.

Valentine’s Day is only a few days away so I’ll be all over the net, celebrating my release this month. You can check out my schedule at http://www.tastybooktours.com/2015/11/me-you-by-brenda-gayle.html.

I’ve been posting a fun fact about Candy Hearts every Monday, Wednesday & Friday on my Facebook page (http://www.facebook.com/brendagayleauthor) and on Twitter (http://twitter.com/Brenda_Gayle) (look for #CandyHeartFun).

Also, the Candy Hearts Romance authors are holding a big Facebook party (https://www.facebook.com/events/1033929749981933/ ) on February 11 and everyone is invited. It’s a great chance to check out a whole range of books—the series covers pretty much all romance genres—and maybe score some free reads. I’ll be co-hosting at 7:30 pm EST. 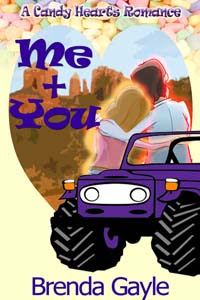 Teacher Lori Tait has always wanted a family, but now
she’s 40, she’s pretty much decided all the good men are taken. Instead, she
devotes herself to her students, particularly one little girl whose struggle
with math seems inconsistent with an otherwise brilliant and artistic mind.
Mark Wilder hadn’t planned to become a father, but when a
fling resulted in his daughter, Grace, he whole-heartedly embraced the role.
Raised in a family of boys, what does he know about women and girls? Once he
learns of Grace’s inability to comprehend basic math, he welcomes the role of
tutor as a way to connect with his daughter; the opportunity to spend time with
her sexy teacher is an added bonus.
When Lori cracks the mystery of Grace’s problem Mark’s
world is thrown into turmoil; he’s the last person who can help his daughter.
He pushes everyone away, confirming Lori’s theory about men. Grace, however,
has other plans. Using her new-found understanding of math, she sets out to
prove to her father and teacher that, together, they add up to the perfect
match.
BUY NOW
Amazon | B&N | Kobo | iTunes 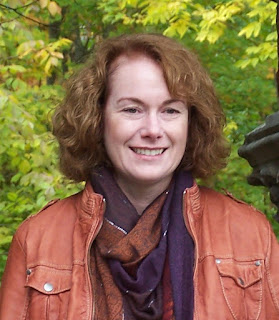 I’ve been a writer all my life but returned to my love of
fiction after more than 20 years in the world of corporate
communications–although some might argue there is plenty of opportunity for
fiction-writing there, too. I have a Master’s degree in journalism and an
undergraduate degree in psychology. A fan of many genres, I am drawn to
contemporary romance and enjoy creating deeply emotional stories with elements
of mystery and suspense.
I live in eastern Ontario with my wonderful husband, two
fabulous children, a rescued cat, two Siberian Huskies, and assorted aquatic
wildlife. One Response to Author Brenda Gayle