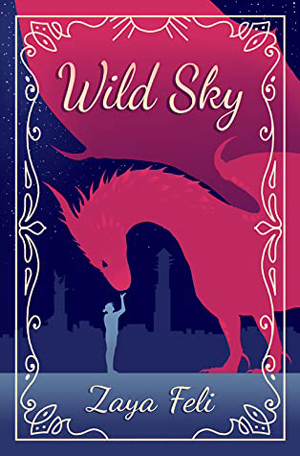 Tauran Darrica has been retired from the Valreus Sky Guard for four years following the Battle of the Broken Wings that resulted in the death of his dragon. Now, all Tauran wants to do is spend his days forgetting the past and gambling his way to an unsteady income.

So when his old general from the Sky Guard hunts Tauran down to request his help with staving off the increasingly aggressive wild dragon population, Tauran refuses. But a fire ruins his rented room and leaves him without a place to stay, and Tauran finds himself on the road to Valreus, after all.

Tauran is determined to stay as far away from dragons as he can get, but a starry-eyed young man from Sharoani, land of the wild dragons, might just ruin his plans.

An interview with Zaya Feli

When did you start writing?

I used to write a lot as a child and in my early teens. I’d devour young adult fantasy books, and afterwards, I’d always be left with the strong desire to create worlds and characters of my own. But at thirteen years old, I didn’t have the skill, and for many years, I pushed writing aside and focused on art and illustration instead. But in my early twenties, I discovered the vast and incredible world of queer fiction and my love for writing was rekindled. Now, it’s here to stay!

My writing space would probably be considered boring by most. I sit at a desk, facing a blank white wall. I always write in silence, and never at parks of cafés or in other public spaces. But for me, this works! Procrastination is my worst enemy, and having a quiet, somewhat empty space to write removes distraction and allows me to focus, to really dive deep and get sucked into the story unfolding on the page.

Tell us about the process for coming up with the cover.

As an illustrator, I create all my own covers, and surprisingly, they’re almost always one of the first things I create for a new story. Of course, that first cover is always just a draft. Same as how a novel goes through many drafts, my covers go through many drafts. The first cover I create represents only the ideas I have in my head. As I start to draft the novel, I eventually scrap the first cover and create a new one. The cover for WILD SKY went through one major change, and several smaller changes. The entire cover was scrapped and redone, and then, as the written drafts progressed, so did the cover in terms of color changes, font changes, character details, etc. To me, designing the cover is as crucial a part of discovering the story as the plotting and writing is.

What is the future for the characters? Will there be a sequel?

WILD SKY is a standalone book with a closed ending and there will be no sequels. I do, however, plan to return to the WILD SKY universe again in the future, with a whole new cast of characters, set hundreds of years either in the past or future. WILD SKY’s world is huge and leaves lots of room for new stories to explore!

That being said, the main characters of WILD SKY have a happy future ahead of them. ‘No tragic endings’ is a promise I always make to my readers.

What are the tools of the trade?

Aside from my trusty laptop and Scrivener: notebooks, notebooks and more notebooks! As much as I try to stay organized, my notes are scattered everywhere. And not just in books! Notepads, torn off pages, tissues, apps… I may have notes for a single novel in 10-15 different places. This can definitely be cause for trouble, but once an idea comes to me, I just have to write it down ASAP before it slips away!

Where do you get your inspiration?

My inspiration can come from anywhere, and when it does, I try to embrace it! I get a lot of inspiration from books, movies and tv series I enjoy, but sometimes, it’s more subtle than that. Maybe a stranger on the bus has an interesting style that one of my characters might wear. Often, I’ll sketch a nameless character and they end up becoming the main character of their own story. Tauran, one of the two main characters of WILD SKY, was a character design I drew long before I even knew who he was going to become.

How many books have you written? Which is your favorite?

WILD SKY is my 6th published book. IRON BREAKERS was my first series, a trilogy. After IRON BREAKERS, I wrote THE ICEFJORD SAGA, and then WILD SKY. THE ICEFJORD SAGA will always hold a special place in my heart, because it draws on a culture and places I’m familiar with and grew up around. It feels like home. But WILD SKY is my biggest, most ambitious project yet. It has taught me so much and I’ll always be proud of how much work went into it.

Does one of the main characters hold a special place in your heart? If so, why?

It’s just about impossible for me to choose between Tauran and Kalai!

Kalai is perhaps the most like me. He exists inside his own head a lot. Kalai is a dreamer who spent most of his life longing for the adventures he read about in books. Of the two main characters, Kalai is the most contemplative and thoughtful.

Tauran is nothing like me at all. He’s far more outgoing, spontaneous, and a bit of a rule-breaker. Where Kalai often lets his head guide him, Tauran is guided wholly by his heart. This made Tauran an incredibly fun character to write because he was so unpredictible, even to me. I could push him further than I’ve been able to push characters in the past, because he is someone who’s willing to throw himself into almost every challenging situation head-on! 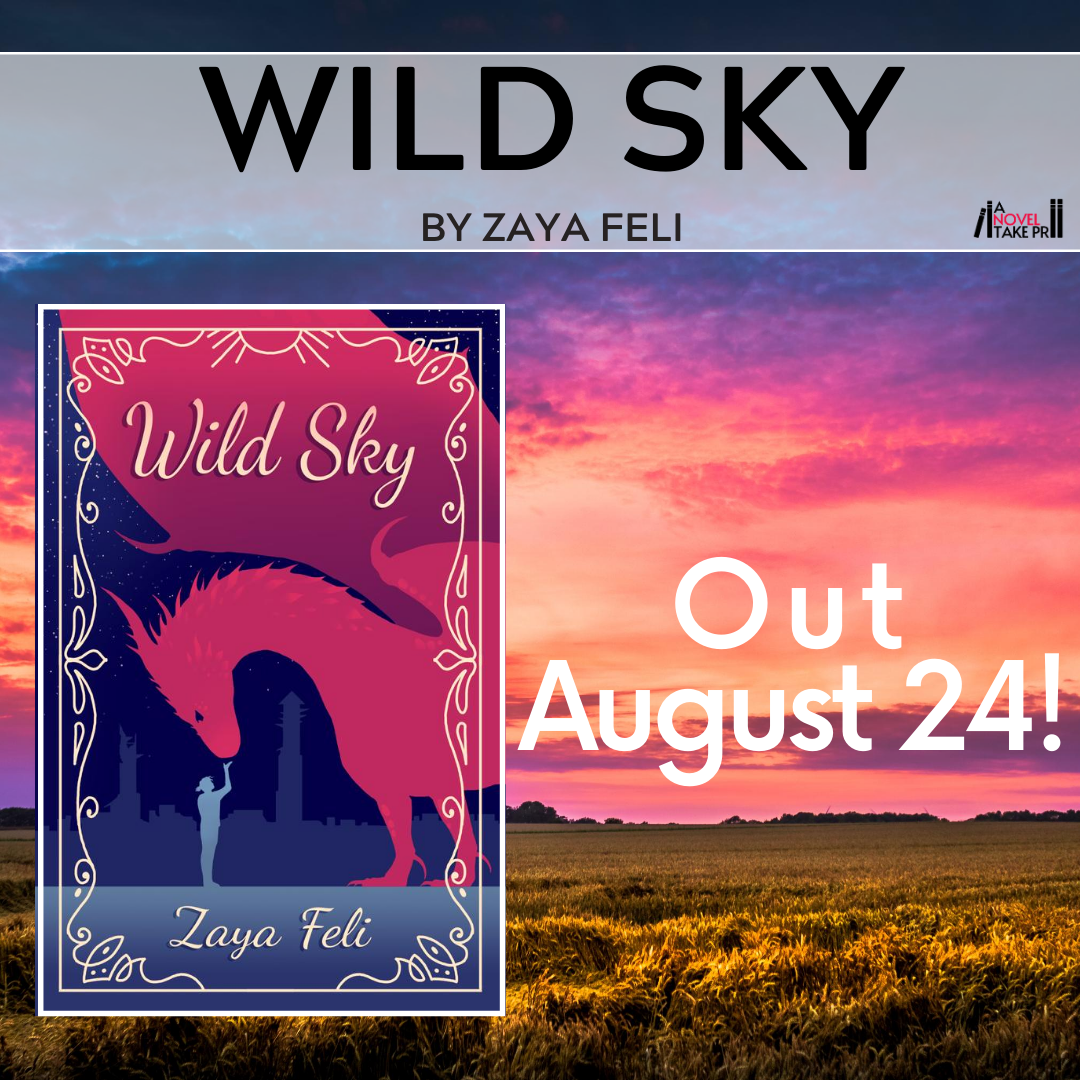 Tauran Darrica has been retired from the Valreus Sky Guard for four years following the Battle of the Broken Wings that resulted in the death of his dragon. Now, all Tauran wants to do is spend his days forgetting the past and gambling his way to an unsteady income.

So when his old general from the Sky Guard hunts Tauran down to request his help with staving off the increasingly aggressive wild dragon population, Tauran refuses. But a fire ruins his rented room and leaves him without a place to stay, and Tauran finds himself on the road to Valreus, after all.

Tauran is determined to stay as far away from dragons as he can get, but a starry-eyed young man from Sharoani, land of the wild dragons, might just ruin his plans.

Kalai Ro-Ani has spent his life watching the stars, knowing he could never reach them.

With his wild dragon Arrow, he sets out for the city of Valreus in the hope of building himself a better future than he could have stuck at the foot of the Kel Visal dragon temples.

But nobody told Kalai that only the Sky Guard is allowed to own dragons, so when Arrow kills a guard in Kalai’s defense, it looks like his adventure might be over before it can begin. But a chance encounter at the old Valreus archive offers Kalai the future he’d been hoping for. In the span of a single day, he has a home, a job, and a purpose.

In Valreus, something much bigger falls into his lap – along with a tall and striking Valrean man with a rather strange disposition.

About the Author:  Zaya Feli grew up in various small towns in eastern Denmark where she spent most of her childhood and youth daydreaming about strange and incredible fantasy worlds. In 2018, she moved to northern Denmark with her pet snake, Helix, to work as a web developer, and is now dedicating all her free time turning the fantasy worlds inside her head into words and illustrations on the page.

An avid sci fi and fantasy fan since childhood, she also has a deep love for history, archery, nature, language and art.

Zaya Feli released her debut novel, Stag’s Run, in November 2016, and has since released four more full length novels and a short story. Her favourite genres are fantasy and sci-fi with a sprinkle of romance.

Giveaway: to celebrate the release of Wild Sky, Zaya Feli is giving away three e-copies of any back catalog e-book! Enter below. Must be 18 to enter and win, open internationally.