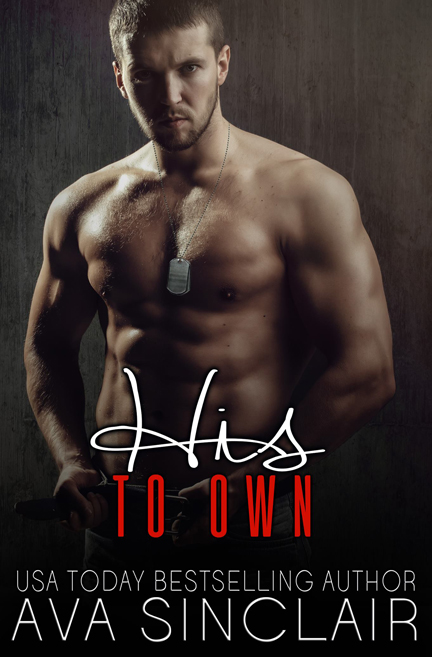 Ava Sinclair: HIS TO OWN.

He’ll do anything he wants with me, and there’s nothing I can do about it. He’ll spank me for the slightest defiance, tease my virgin body until I’m desperate, and then claim me as hard and thoroughly as he pleases… Blurb:
The plan was flawless. The location for the auction was ideal. My body was toned to perfection. The participants all billionaires were chosen carefully. The winner would have one month with me, and for the price of my innocence I would be set for life.

Then it all went terribly wrong.

The man who bought me is no middle-aged investment banker. He’s a battle-hardened soldier, tough, stern, and unyielding. Now he owns me, and he’s determined to get his money’s worth.

He’ll do anything he wants with me, and there’s nothing I can do about it. He’ll spank my bare ass for the slightest defiance, tease my virgin body until I’m soaking wet and desperate, and then claim me as hard and thoroughly as he pleases.

I don’t even know if he’ll let me go when the month is over and I’m not sure I’ll want him to.

“You can ask your questions now,” he says.

“What’s going to happen next?”

He takes a sip of his wine and sighs. “What do you think is going to happen?”

“I don’t know.” I look over at the fire dancing in the grate of the stove. “Nothing is going as planned.”

“And you’re surprised by that? You sell your freedom and are shocked by the consequences?”

“I’m not stupid,” I say defensively. “It wasn’t supposed to be like this.”

“And how was it supposed to be, Maeve?”

The sound of his voice saying my name sends an odd shudder through me. His large hand rubs his square jaw thoughtfully as he looks at me.

“It was supposed to be…predictable,” I say. “At least to a point. I figured I’d go to some penthouse in New York or London or Dubai. I’d lay beneath some older man with my eyes closed until it was over. Then I’d endure him for a month, pretending to enjoy sex with him as he showered me with gifts. At the end of the month, I’d leave a wealthy woman.”

“You have a very distorted notion of wealth,” he says.

“Why?” I ask. “Because I sold myself to the highest bidder? It’s must be nice to sit on a mountaintop and judge the motives of common people. And easier when you own the mountain.”

“That’s fair,” he says. “But it doesn’t change anything, Maeve. For centuries man has handed himself over for enslavement, thinking it would mean security and comfort. But in the end, it’s just enslavement, and you’re at the mercy of your master.”

He leans forward. His eyes are glittering in the firelight. “For now? Yes,” he says.

“It means that I’m not ready to answer all the questions you have right now. It means that whatever I do, even if it scares you, even if it hurts and makes you cry, is for your own good. Understand?”

“How can you expect me to understand? I don’t even know you.”

“So you only trust people you know?” he asks. “You might want to rethink that.”

I start to ask what he means but he’s gotten up to stoke the fire.

“Stand up, Maeve,” he says when he turns back to face me.

“Take your dress off.”

Variety is the spice of life and Ava Sinclair writes a little something for everyone, from dark romance to menage to kinky AF age play. But the one thing that is consistent in her books are strong storylines, alpha males, and strong women whose hearts and bodies aren’t given up without a fight.