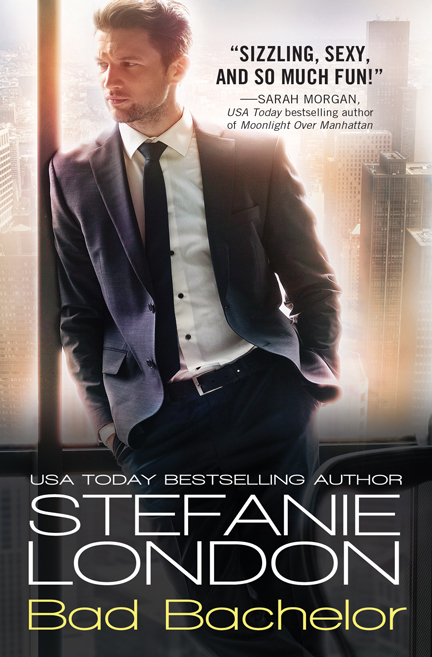 Everybody’s talking about the hot new app reviewing New York’s most eligible bachelors. But why focus on prince charming when you can read the latest dirt on the lowest-ranked “Bad Bachelors”—NYC’s most notorious bad boys?

If one more person mentions Bad Bachelors to Reed McMahon, someone’s gonna get hurt. A PR whiz, Reed is known as an ‘image fixer’ but his womanizing ways have caught up with him. What he needs is a PR miracle of his own.

Everybody’s talking about the hot new app reviewing New York’s most eligible bachelors. But why focus on prince charming when you can read the latest dirt on the lowest-ranked “Bad Bachelors”—NYC’s most notorious bad boys?

If one more person mentions Bad Bachelors to Reed McMahon, someone’s gonna get hurt. A PR whiz, Reed is known as an ‘image fixer’ but his womanizing ways have caught up with him. What he needs is a PR miracle of his own.

When Reed strolls into Darcy Greer’s workplace offering to help save the struggling library, she isn’t buying it. The prickly Brooklynite knows Reed is exactly the kind of guy she should avoid. But the library does need his help. As she reluctantly works with Reed, she realizes there’s more to a man than his reputation. Maybe, just maybe Bad Bachelor #1 is THE one for her.

They stopped beside a black car with tinted windows. Out of nowhere, a driver appeared and opened the door for them. Darcy suddenly felt underdressed, which was stupid since they were only going for a ride.

“So tell me: What’s so appealing about Five-Star Darren?” Reed asked as they slid into the back seat. A glass partition separated them from the driver.

“None of your business.” Oh God, they were not having this conversation. Not while a billion dirty thoughts were driving her to distraction. Damn him, why did he have to mention sex?

Her hormones hadn’t been this rowdy since high school. But the second he got close and his clean, warm scent invaded her nostrils, it was like the sexy bits of her body started doing tequila shots.

“Oh come on, you can trust me. I might even be able to give you some advice.” His brown eyes twinkled.

They were framed by full, thick lashes—the kind of lashes that had no business being on a man.

God, they were far too close in the back seat of the car. Her bare leg was mere inches from his, and the scent of his aftershave invaded her nostrils. It was crisp, clean, with a hint of citrus.

“You were late today,” she blurted out, hoping the abrupt change in conversation might steer him away from delving into her nonexistent dating life—and perhaps jolt her brain into not focusing on how good he smelled.

“Half an hour late and I was sitting there, waiting.”

“My meeting ran over and my phone died. I could have gone back to the office to email you, but that

would have meant being later than I already was.” He reached for a bottle of water that sat in a compartment in the door. When he offered her one, she shook her head. “I apologize for keeping you waiting.”

“Thank you. I appreciate it.”

“Now, back to your dating life—”

“No. We’re not having this conversation.” She held up a hand. “Besides, why do you care?”

“Because, after careful deliberation, I’ve decided that you are interesting.”

“Gee, thanks.” Darcy snorted. “I’ll pass on that so-called compliment.”

“You do know ‘interesting’ is usually a code word for ‘weird,’ right? It’s not much better than telling a girl she has a great personality.”

He brought the water bottle to his mouth and sipped. Full lips hinted at sinful activities and Darcy tried to quash the flutter low in her belly. He probably knew exactly what to do with his lips too.

“You are interesting…in the non–code word sense. Even if you do think I’m a jerk. And Five-Star Darren would be a terrible match, for what it’s worth.”

Curiosity tugged at her. She knew nothing about the dating world, and it was clear he was well experienced. Surely there wouldn’t be any harm in gleaning some information from him…for research purposes, of course.

“All these women have rated him highly, yet they haven’t stayed with him. Why would that be?”

“I don’t know.” She frowned. “Maybe it just wasn’t the right time.”

“For all those women?”

Okay, so that did sound a bit suspicious when he put it like that. “But the reviews—”

“What do the reviews say?”

She pulled up Darren’s profile on the app and scanned down the page. “‘Great guy but the timing wasn’t right.’” She shot him a smug look. “See? Told you.”

“He’s a total gentleman, but they didn’t have many common interests. Uh, another one says their jobs made dating too hard but that he was a nice person. Apparently, he’s romantic, but there wasn’t enough spark.” Darcy kept scrolling. “He’s kind and funny, a great conversationalist. I can’t see any red flags here.”

Reed shrugged. “Or he doesn’t know how to make a woman come.”

“Stop,” she hissed, the heat flushing through her body in a way that was entirely too pleasurable. Totally, totally inappropriate. “You can’t say that.”

“Why not? It’s just sex. And sometimes you have to look at what people aren’t saying to understand what they are.” He nodded. “Words can be unreliable like that.”

Not only because of the bad reviews, but also because it was clear he could run circles around her verbally. There wasn’t a doubt in her mind that he would do the same thing in the bedroom. Stefanie London is the USA Today bestselling author of contemporary romances with humor, heat, and heart. Originally from Melbourne, Australia, Stefanie now lives in Toronto, Canada with her husband. She loves to read, collect lipsticks, watch zombie movies and drink coffee. Her bestselling book, Pretend It’s Love, was a 2016 Romantic Book of the Year finalist with the Romance Writers of Australia. You can visit her at www.stefanie-london.com

And, get the latest dirt on Bad Bachelor #1 at the site badbachelors.weebly.com!

Enter to win a copy of Bad Bachelor by Stefanie London!