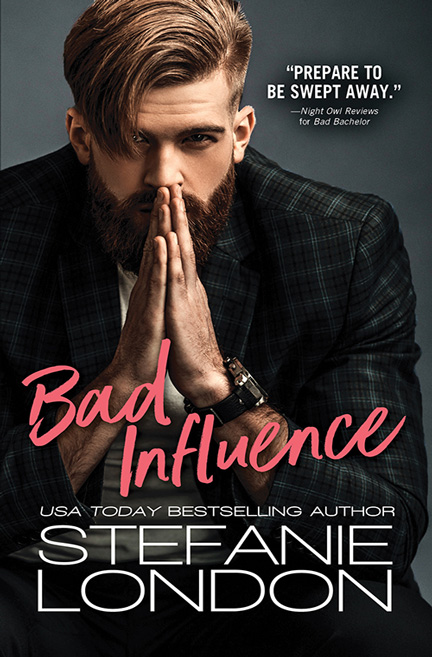 In Stefanie London’s BAD INFLUENCE, Annie Maxwell had her whole life figured out…until her fiancé left her when his career took off. If that wasn’t bad enough, every society blog posted pictures of him escorting a woman wearing her engagement ring. To help the women of New York avoid guys like her ex, Annie created the Bad Bachelors app. But try as she might, Annie just can’t forget him… He’s the bad bachelor who inspired it all…

Annie Maxwell had her whole life figured out…until her fiancé left her when his career took off. If that wasn’t bad enough, every society blog posted pictures of him escorting a woman wearing her engagement ring. To help the women of New York avoid guys like her ex, Annie created the Bad Bachelors app. But try as she might, Annie just can’t forget him…

For bank executive Joe Preston, his greatest mistake was leaving the love of his life when she needed him most. Now, all he wants is to make things right—and she won’t have him. But when Annie’s safety is threatened by a hacker determined to bring down her app, Joe is the only one she can turn to. He’ll have to lay himself on the line to prove to Annie that he’s a changed man. But will their hard-won bond survive the revelation that Annie is the one pulling the strings behind Bad Bachelors?

“You’re not thinking about seeing him again, are you?” Darcy shoved the sleeve of her sweater up, exposing her elaborate tattoos. “Please tell me you’re not in self-destruct mode.”

“I’m not,” Annie said, unsure which of the two things she was actually addressing.

She should be repulsed by the thought of having Joseph back in her life. Spitting in anger that he’d waltzed back into Manhattan and was hanging around “their place” without warning her. But the fact was, Friday night had shifted something between them. He’d come to her rescue when she’d needed him.

This time. Let’s not forget that his presence and attention are conditional.

Darcy pulled on a pair of pink rubber gloves and wrenched Annie’s mother’s old, squeaky taps. “Look me in the eye and tell me you’re not thinking about seeing him again.”

The answer should have been an immediate absolutely not, but the words didn’t spring to Annie’s lips. “Maybe it’ll give me some closure.”

“It’s been three years. What other information could change the way you feel?”

“The answer is none. Nothing will change what happened.” She squirted detergent into the basin and Annie watched the luminescent bubbles multiply under the hot water. “Think about the reasons why he might want to talk to you. Stay the hell away. Trust me, your sanity will thank you.”

Of course, she knew Darcy was right. When Joseph had walked out, she’d fallen to pieces. Her friends had helped put her back together. They’d crashed at her place that first night—Darcy and Remi sleeping on the cramped pullout sofa bed—to make sure she got up the next morning and ate a proper breakfast. They’d stood by her while she called her boss and asked for a few days off to deal with it. They’d plied her with wine and pizza and cheesy movies.

They’d gone to the hospital with her after her mother’s mastectomy, held her hand, and promised her that everything would be okay. Things he should have done.

“What are you two gossiping about?” Her mother appeared in the doorway, a knowing smile on her lips. Only she wouldn’t be smiling if she actually knew that their “boy talk” was about he who should not be named.

Darcy shot Annie a look. “Your daughter is harassing me about my charity run.”

Her mother walked over and wrapped her arms around her, her head barely coming up to Annie’s chin. She smelled like lemon and sweet basil and perfume. Like always. It struck Annie, even now, that her mother’s shape was so permanently changed. She’d decided not to have reconstructive surgery after the double mastectomy—one to address the cancer and one as a preventive measure—having always hated her huge bust. But they’d never actually talked about it. And Annie hadn’t wanted to pressure her mother when she knew it was still a painful topic.

Her mother and Sal had always been determined to “protect” their kids from anything painful in life, including their health problems. At the time, they’d hid Connie’s diagnosis until it was decided she needed to have surgery. Had Annie known about her mother’s situation earlier, she might never have agreed to go to Singapore. Perhaps with that on the table from the get-go, things might have turned out differently between Annie and Joseph.

But it hadn’t, and knowing her parents were inclined to harbor such big secrets had made Annie jittery. And untrusting.

Wow, and the hypocrite of the year award goes to…?

“You know I love you, topolina. But you are a giant pain in the ass sometimes.” Connie’s loud laugh ricocheted off the worn linoleum and weathered walls.

“Charming,” Annie replied, extracting herself from her mother’s embrace and heading behind the breakfast bar to gather more dishes. “Let me know when we want to do dessert, and I’ll get some coffee going.”

“Soon. The girls have gone for a walk and the boys are in the garage.” She attempted to muscle her way into the kitchen to help, but both women waved her away.

Connie rested against the breakfast bar. Her once-chocolate-brown hair was now peppered with gray. The lines had deepened around her eyes, which still had a mischievous twinkle, and she wore her signature bright-pink lipstick.

To Annie, she would always be the most beautiful woman on the face of the earth. And the bravest.

“So,” Connie said. Annie’s ears pricked up at her tone. It was the I’ve heard something interesting tone. “When were you going to tell me Joseph is back in town?”

Darcy made a choking sound and Annie froze, her back to her mother as she dried one of the white ceramic platters. “Huh?”

“I ran into Zia Mariella at Costco, who said she’d had lunch with Anna-Maria from down the street, and she had spoken with Petra—Petra who’s married to Tony—whose grandson works for one of the banks, and he read an article saying Joseph is now the chief something-or-other.”

Annie blinked as her brain took the necessary time to catch up with her mother’s story. “Wait, which Petra?”

Connie ignored her question and narrowed her eyes. “Did you know?”

Darcy looked like she was about to back out of the kitchen, so Annie grabbed her wrist, shooting her a Don’t you dare leave me look. Crap. What was she supposed to do now? She never lied to her parents. Ever.

“You did know.” Connie’s lips flattened into a line so thin that almost all of the pink lipstick disappeared. “How could you not tell me?”

“I didn’t think you’d want to know, to be honest.” Annie tucked her hair behind her ear. Shit. This was not a time for her tells. When it came to dealing with her mother’s warpath, the mantra needed to be: Show no weakness!

“Well, I do.” Connie planted her hands on her hips. “So now I can tell him to leave again. He’s not welcome in this city.”

Her mother would definitely freak the hell out if she knew he’d been in Annie’s apartment.

“Thanks, Mayor Mama. I’ll be sure to revoke his Connie visa.” She rolled her eyes.