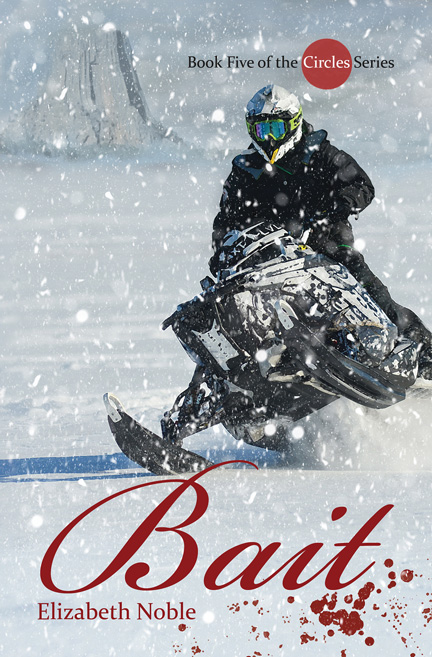 BAIT by Elizabeth Noble.  Tyler McCall was a teacher once. He made the mistake of falling for a young man who was also a student in the school where he taught. That mistake cost him his job, his freedom and everything he’d worked for. Now he lives in the Black Hills of Wyoming working at the Big Rock Inn. Linden Bourne is a no nonsense FBI agent based out of Arizona. When circumstances take Linden to Wyoming to question Tyler, they find themselves trapped in the empty inn near Devils Tower by a blizzard. They’ve met before and their attraction to each other begins to grow…

Hi and thank you for hosting me today!

Whew, that was a relief to admit!

Today my latest book, Bait, was released by Dreamspinner Press. Bait is a romantic thriller and part of a series I call Circles.

The theme of my mystery suspense series is ‘Every life is a circle’ and resulted from the fact I can’t make up my mind. Several years ago, when I was working out the specifics of this series and researching various branches of American law enforcement I decided that writing about just one was too limiting.

There are times when a US Marshal investigating how a beat cop died will team up with an I.C.E. agent. Other times he might find partner with a Park Ranger. The same Park Ranger might assist the FBI in some manner. The possibilities and combinations are endless.

Then there are the husbands, boyfriends and new romantic interests of those in law enforcement. They play an important part of each story! They are, after all, representative of the reason one goes into law enforcement. To protect others starting with those we love.

I wanted to create stories that fell into the thriller/suspense/mystery category but were also romances. I wanted to show relationships between a man with a badge and the guy he falls for. There are challenges that go along with loving a cop and my goal was to explore some of those challenges.

Using the same reasoning I decided each book would have a different type of romantic couple. There is new love, renewed love and attractions that blossom to much more during the course of each mystery.

Bait takes place in the Black Hills of Wyoming. Being in the wilderness adds a whole other layer of danger and urgency to their situation since neither of these men are familiar with wilderness survival.

There was an image that popped into my head and gave the series its name. Those five various colored Olympic Rings. All different. Each one leads into the next.

The men in Bait and the other books in the series are separated by time and distance and yet their stories collide, their circles intertwine.

Every life, and mystery, is a circle that takes on a path to something unknown waiting to be discovered.

Dive in and enjoy the journey with me. Read on,

I’m offering a free eBook from my backlist with bundles and 2016 releases not included. Comment on this post to enter. I’d really like to know what’s your favorite law enforcement type character? Don’t forget to leave me your email so I can contact you if you’re the winner. Tyler McCall was a teacher once. He made the mistake of falling for a young man who was also a student in the school where he taught. That mistake cost him his job, his freedom and everything he’d worked for. Now he lives in the Black Hills of Wyoming working at the Big Rock Inn. Linden Bourne is a no nonsense FBI agent based out of Arizona. When circumstances take Linden to Wyoming to question Tyler they find themselves trapped in the empty inn near Devils Tower by a blizzard. They’ve met before and their attraction to each other begins to grow.

The problem is they aren’t the only people stranded in the Big Rock Inn by the snow and wind. A killer has targeted Tyler and won’t let a little detail like an unexpected visit by the FBI stop what they’ve planned to do. Linden is completely out of his element but he’s sworn to protect and that’s exactly what he plans to do: protect Tyler at all costs.

As soon as he had Tyler stuffed into the coat and zipped up, the sweat under Linden’s shirt began freezing against his skin. He moved his arms up and down and wiggled side to side to ease how the material stuck to him. Almost at once he began shivering. He straddled the front seat of the snowmobile and reached back, pulling Tyler’s arms around his waist. Taking Tyler’s hands, he got him to hang on to Linden’s belt.

“Ready?” He turned his head, and because of Tyler’s position, Linden’s lips brushed his forehead as he spoke.

Tyler nodded and mumbled, “I’m g-gonna need to w-warm up more before w-we….” His voice trailed off, and despite their desperate situation, Linden chuckled.

Linden shook his head while he programmed the coordinates Mason had given him for the ranger station into the snowmobile’s GPS and started the machine. Power from the engine surged through the vehicle to Linden. As with other vehicles of this type, it gave him a rush, almost a high, and sent renewed vigor and determination swelling through him.

He put the snowmobile into motion and understood immediately why Mason had stressed this was a utility snowmobile. The fact that there were different types had surprised Linden a bit. The snowmobile wasn’t the sort he was familiar with and had seen on TV racing across the snow. This thing was a beast. With very little effort, it steadily chewed up the distance they needed to cover. Even the rougher terrain poking through the mounding snow didn’t deter it from moving forward at a steady clip.

If Linden ever took up winter sports and moved to an area such as this, he was so getting one of these. He took it slow, even though the chill wind whipped through his shirt. Tyler leaning against his back helped keep him warm. He gritted his teeth and kept the snowmobile going at a stable speed. The machine’s capable pace gave Linden renewed hope and confidence they could and would survive this ordeal.

Elizabeth Noble started telling stories before she actually knew how to write, and her family was very happy when she learned to put words on a page. Those words turned into fan fiction that turned into a genuine love of M/M romance fiction. Being able to share her works with Dreamspinner is really a dream come true. She has a real love for a good mystery complete with murder and twisty plots as well as all things sci-fi, futuristic, and supernatural and a bit of an unnatural interest in a super-volcano in Wyoming.

Elizabeth has three grown children and is now happily owned by an adorable mixed breed canine princess and one tabby cat. She lives in her native northeast Ohio, the perfect place for gardening, winter and summer sports (go Tribe!). When she’s not writing she’s working as a veterinary nurse, so don’t be surprised to see her men with a pet or three who are a very big part of their lives.

Elizabeth received several amateur writing awards. Since being published several of her novels have received honorable mentions in the Rainbow Awards. Her novel Jewel Cave was a runner up in the 2015 Rainbow awards in the Gay Mystery/Thriller category.

Every life is a circle, and sometimes those circles connect and overlap in unexpected ways, even if the patterns they form aren’t obvious at first glance. Past and present, from the wilderness to small towns and cities, the greedy and evil seek to exploit the vulnerable. The brave men of law enforcement fight to protect the innocent and punish the guilty—but they’re not alone. Men from all walks of life are called to stand beside them and solve these mysteries. Along the way, lives intertwine as couples are reminded that one thing makes the struggle worthwhile: love.