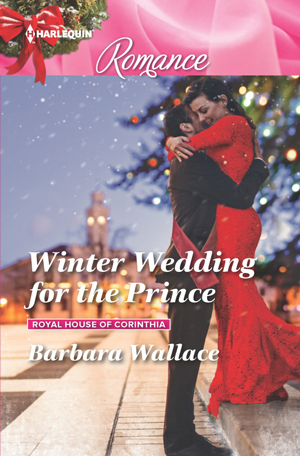 Welcome to Corinthia, the beautiful Mediterranean island located off the Almalfi Coast.  It’s a country as rich in tradition as it is natural beauty.  From its beautiful southern coast to its mountainous northern tip, Corinthia a country where Christmas is still a beautiful, simple affair.  It’s also the setting for two sweet romances by Barbara Wallace.

TWO SIBLINGS EACH TORN BETWEEN LOVE AND HONOR Christmas Baby for the Princess

Princess Arianna Santoro wants nothing more than to make her father happy.  She’ll even go so far as to try and force her heart to love the wrong man.  Now, pregnant with the potential heir to the throne, she’s hiding out while trying to decide whether or not she should marry the father or disappoint her father.

New York restaurateur has a thing for hard-luck cases.  Thus, when an incognito Arianna walks through his door looking for help following a robbery, it’s only natural that he say yes.  To him, she’s no different than any of the other “lost puppies” he’s helped over the years.

Except for the fact that he’s falling in love with her.   What’s he going to do when he discovers his latest rescue project is really a runaway princess?  Will he let Arianna go home without a fight?  Or will he convince her to stay with him … and not just for Christmas?

This is such an adorable holiday story…another winner from Barbara Wallace.     Goodreads Review Winter Wedding for the Prince

Crown Prince Armando’s belief in love died along with his wife, but duty dictates he must remarry! He enlists royal assistant Rosa Lamberti to help him find a suitable candidate, but a sizzling kiss under the mistletoe with Rosa awakens feelings Armando thought long buried…

Award winning, best-selling author Barbara Wallace is the author of 19 novels and is known for her strongly drawn characters. Published by both Harlequin Romance and Entangled Publishing, she is a 3 time Romantic Times Reviewers Choice Nominee and has won the Golden Heart, the New England Readers Choice and the Booksellers Best Awards.