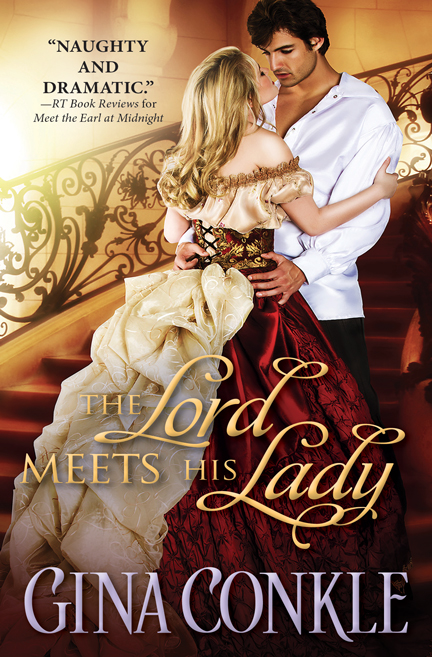 The Battle of the Books: First Emotional Moment by Gina Conkle

Two novels in my Midnight Meetings series are launching in these final months of 2017: The Lord Meets His Lady (book 3) and Meet a Rogue at Midnight (book 4, a novella). I’ve been comparing hallmark romance scenes in both stories with various blog posts. I’ve already shared the pivotal First Meet, First Kiss, and First Funny Moment (but more about those later).* The Battle of the Books: First Emotional Moment

Two novels in my Midnight Meetings series are launching in these final months of 2017: The Lord Meets His Lady (book 3) and Meet a Rogue at Midnight (book 4, a novella). I’ve been comparing hallmark romance scenes in both stories with various blog posts. I’ve already shared the pivotal First Meet, First Kiss, and First Funny Moment (but more about those later).*

Today I’m sharing that romance staple: First Emotional Moment…not to be confused with the big I’m-in-love realization that we all crave. This is when feelings begin to flood a man for a woman (or a woman for a man). But, emotions are unique. What touches one reader may breeze past another.

So, please, read and compare these two First Emotional Moments. Tell me in the comments which scene touched you more (option A or B) and why. A.  Meet a Rogue at Midnight The Scene Set-up: Jonas examines a damaged, high-value chair (a Roman antiquity). Livvy wants to refuse his help, but he works his way into her trust…and her heart.

She held his blue velvet coat, a mute witness to Jonas bending this way and that. A touch to another hinge. A thoughtful hum as his fingertips ran the length of all four chair legs. Capable hands testing, poking, skimming ancient wood with the gentleness a surgeon gave a desperate patient. Last night, her senses sung a different tune when studying those hands.

“Finding anything I should know about?” she asked.

He slanted a grin at her. “Yes. This old wood is telling me I should work on it.”

“You? Pardon me, Jonas,” she said to his profile. “But you don’t know one jot or tittle about Roman antiquities. Your offer is generous, but I’m not sure it’s wise.”

He chuckled, examining the upper arch. “Your Roman chair, it’s

furniture. Don’t forget, I come from generations of furniture makers.”

“Which you turned your back on ten years ago. This isn’t a practice piece.”

His hands grazed the back rest’s upper curve, pausing to push a spot as if he tested a wound. “I’m aware of the gravity here. You forget. The Captain apprenticed me when I was eleven years old.”

Hugging his velvet coat, she couldn’t argue with his experience. While she spent time with tutors, Jonas had learned the cabinetmaker’s trade at his grandfather’s side. He tilted the chair into the hearth’s light, his forefinger tracing knobby carvings. Jonas checked wood flecks on his finger. He even sniffed the wood.

“Some rot here, but the rest of this arch is intact. If you won’t let me work on it, you’d better have a care how deep you work the grain or you’ll split it in two.”

“You see that in the grain?”

“I do.” He stood up and dusted off his hands.

She passed back his coat. “You really think you can save it? Even the hinges? After the ivory legs, those hinges and the carvings will be what collectors inspect the most.”

Jonas slid into his blue velvet coat. “You’re selling this to collectors?”

“One collector. He has a number of interested buyers, if the chair remains intact.”

“I’ll need to borrow some of the Captain’s tools, but that shouldn’t be a problem,” he said, collecting his heavy outer coat, hat, and gloves.

She folded the ends of her shawl over her chest amused at her refusal of Jonas’s help turning into a discussion of how he would help. “Your working on this chair would free me to write the next book.”

“In your father’s name? Or yours?”

“My father’s. No one will accept my name on a manuscript.”

“Why not? You were spouting facts about Londinium and Roman generals when you were ten years old.”

Her nose wrinkled. “Irritating, wasn’t it?”

His lone word, said in his deep rumble of a voice, satisfied her to her toes. Fragile threads of friendship strengthened on his singular affirmation. The truth was Jonas understood her. He always had.

“I’m afraid it will be my hand on the manuscript and the name Thomas J. Halsey on the book.” She fixed her shawl again. “Once the book is done and the curule chair restored, I plan to put this all behind me.”

Jonas rubbed gold trim on his tricorne, a smile ghosting his mouth. “We’ll have a few weeks. We can manage it together.”

Firelight shined on his tall, black boots. Jonas was handsome but not in the conventional sense. He was big, his size akin to braw Highlanders. Town gentlemen were tame by comparison. Jonas would never spout flowery phrases or write poetic letters. But, he’d keep a secret and be the friend to catch you if you fell from an adventure that went awry.

And her heart ached that he’d not be around to catch her again.

This was all she’d have. A few weeks with Jonas.

The hat rotated in his hands, a sluggish end-over-end circle as his gaze locked with hers. “Well, I expect the Captain and his cronies are impatiently awaiting my return.”

“Yes.” Her voice was quiet. “You should get back to your grandfather and his guests.”

Jonas stepped around the Roman chair, his broad shoulders seeming to take up the room. She followed his blue velvet-covered back as he picked his way through the relic-strewn floor to the stairs. He slipped on his black frock coat and black tricorne in silence. Her palm pressed her stomacher. Butterflies camped there.

“You will be back tomorrow?” she called out. “To fix the chair.”

Jonas’s gave her a swoon-worthy smile. “Bright and early.”

She’d never swooned a day in her life, but her knees didn’t know that. They were jelly. “Bright and early. I look forward to it.”

He disappeared down the winding stairs. She froze in place, listening to his descending steps until the old oak door scraped shut. Grabbing her skirts, she sprinted to the window to watch Jonas walk home. Winter covered the evening world in white. Bits of diamonds could be scattered in nighttime snow. Jonas emerged from the side of the tower, trudging through the fluff. Light from her window cast a mellow glow on the ground, and Jonas walked through it. Gentle wind trifled with his coat. His black boots stopped their trudge. He turned and waved. Nose pressed to cold glass, she waved back.

Was it possible his blue eyes shined clearer and more lively? For her? Palm flat on the icy window, she felt Jonas, his warmth and presence lingering until he disappeared in the night. B.  The Lord Meets His Lady The Scene Set-up: Lord Marcus offered to help Genevieve once before, which she turned down. Circumstances made her rethink that refusal. She’s having a tough time divulging painful secrets while digesting Lord Marcus’s genuine offer to help—and that he asks for nothing in return.

Lord Bowles brushed hair off her face, his tenderness healing her, coaxing her. She wanted to melt into him. How empty her life had been, lacking in the smallest acts of gentle affection.  Her body was lighter for having shared weighty secrets.

“Please don’t think ill of her. My mother was good to me. She never deserted me.”

His gloved hands stroked her cheek. The leather touch, the smell of his warmth, his skin all anchored her. She turned into the caress and shut her eyes. Pieces of her life played, sharp memories, vivid and as real as if lived yesterday. The struggle to read. Her uncanny skill with mechanisms and the trouble it brought. Late nights and her mother bringing strange men to their room above The Golden Goose.

“Do you have other family members?”

She shook her head. “Maude Turner is my last known relative. What I’ve told you…it’s all I know.”

She was alone in the world save a grandmother she’d never met.

“Then, we’ll begin with her name.” His arm light on her shoulders, Lord Bowles steered her toward the cottage.

Drained to the bone, she was ready to curl up beneath her brown wool covers and end the day the same as she did last night. Walking to the cottage, wheels ground the dirt. Peter Dutton drove his cart off the road.

“Greetings, Lord Bowles, Miss Abbott.” Peter set the brake and sprang from his seat. He maneuvered a chest from the back. “This came today, Lord Bowles.”

“My things from home. Put it inside, if you will.” They reached the middle of the yard when he stopped and faced her. “Is there anything else?”

Her nose was level with his neckwear, the cloth loose from the day’s labor. She studied the wrinkles and bits of dust caught in the creases. All that remained was a tumult of emotions…not so safely hidden from his perceptive eyes.

She touched his cravat. “Must I bare every single painful part? You can guess there was bad blood between my mother and grandmother.” Her voice thinned to a whisper. “I’m not sure my grandmother will want to see me.”

Voices carried across the yard. Lily and Ruby prepared to leave with their brother, and she couldn’t make herself move. Did he understand this was hardest of all? Her gnawing fear of rejection.

“I understand bad blood with family.” His gloved hand tipped her chin up. “But I also know quality when I see it, and you, Genevieve Turner Abbott, are a person of true quality. Anyone should be over-joyed to claim a connection with you.”

Underneath her cloak, she rested both hands on her belly. She was suspended for a moment, certain a cushion of air nestled between her feet and the ground. “Lord Bowles, you’re in danger of becoming a sainted man.”

His crooked smile spread. “Should never have told you about being a choir boy. Could do permanent damage to my reputation.”

“Your secret’s safe with me.” Book Description for Meet a Rogue at Midnight:

Jonas Bacon Braithwaite, once Nottinghamshire’s favorite trouble-maker, has since become an upstanding man. But, the lushly curved thief hiding in his bedchamber makes him think twice. Livvy Halsey bristles at life’s rules. Always has. Sneaking into the Braithwaite house to reclaim a treasured family heirloom is one way she upends the conventional life that awaits her. Duty demands she marry. There’s no harm in having a little fun with her childhood friend before responsibility calls…

Book Description for The Lord Meets His Lady: Lord Marcus Bowles has stained his family’s reputation for the last time. Only after spending a scandal-free year restoring some far-flung property can this second son return in good graces. But Marcus isn’t one to abandon a lone damsel on a dark country lane. One stolen kiss and Genevieve Turner’s handsome midnight savior disappears. Typical. No matter, Gen is finally on the way to her new post, and hopefully to finding her grandmother as well. Instead she finds her mischievous hero is her new employer. Surely a few more kisses won’t hurt… Gina Conkle writes lush Viking romance and sensual Georgian romance. Her books always offer a fresh, addictive spin on the genre, with the witty banter and sexual tension that readers crave. She grew up in southern California and despite all that sunshine, Gina loves books over beaches and stone castles over sand castles. Now she lives in Michigan with her favorite alpha male, Brian, and their two sons where she’s known to occasionally garden and cook.

4 Responses to Battle of the Books & Amazon Giveaway