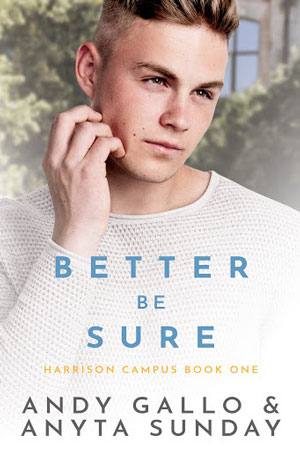 “Better Be Sure” is a sweet, slow burn M/M romance with a heart-pounding HEA. This New Adult, college, opposite sides of the tracks novel can be read as a standalone and in any order.

Orphan Jackson Murphy just staked his legacy on a bet.

Holy shit, his impulsive ass is in trouble.

Bring a guy to the fraternity formal? Pfft. Easy. Won’t be him getting kicked out of the house.

So what if his luck with guys on campus has been shitty? Ed Knowles is Jack’s winning ticket.

A note from Andy Gallo and Anyta Sunday:

We want readers to enjoy a good, new adult romance with two MCs who help each other overcome what’s holding them back from finding love. Orphan Jackson Murphy just staked his legacy on a bet.

Holy shit, his impulsive ass is in trouble.

Bring a guy to the fraternity formal? Pfft. Easy. Won’t be him getting kicked out of the house.

So what if his luck with guys on campus has been shitty? Ed Knowles is Jack’s winning ticket.

But with every stolen look, every secret kiss, every clandestine touch Ed becomes more than just an answer to a bet.

And these cloak-and-dagger meetings that set Jack on fire? They mask one tiny, enormous obstacle: Ed’s not out.

What does Jack do now?

Hold on to his legacy… or his heart?

Ed’s soft lips brushed over his once. Then he paused, dragging his nose lightly over his cheek. They looked at each other for a tingling second, and then Ed cupped the back of Jack’s neck and dragged his lips over his jaw, to his ear, and down the column of his neck, pausing at the pulse. Could Ed taste his excitement?

Jack pulled back, eyes darting toward the stairs. “Your parents are upstairs. I thought….”

Stealing another kiss, softer this time, Ed sat back. “The top three stairs creak if the cat walks on them. Even if we missed the sound of the door opening, we’d hear them the moment they start to come down. More than enough time to make room for the Holy Spirit.”

Jack snickered, rolling his eyes. “I see you spent time in Catholic school too.”

Looking at the empty staircase for a long moment, Jack turned back with a smirk. “I suppose a little more wouldn’t hurt.”

Three kisses later, Jack realized just how much of a bad idea it was. He adjusted his erection, trying to get it to go down. “They’ll never believe we’re just friends when I’m showing like this.”

Eyes fixed on Jack’s crotch, Ed made similar attempts to hide his problem. “Shit. Why do you have be so….” He made a noise at the back of his throat, a cross between a groan and a laugh. “We’ve got a few minutes before dinner. Let’s go out back.”

Jack followed Ed into a laundry room. The door in the back of the room opened to a short staircase that led to the backyard.

Ed paused long enough to grab a football from a pile of sports equipment.

“What’s that for?” Jack followed Ed outside, resisting the urge to grab the ass inches away.

“You used to be a quarterback; I played tight end.”

Jack smirked. “Tight end, eh?” He lowered his voice. “Do I get to find out for myself, or do I have to take your word?”

“Hey!” Ed shook his head. Jack watched him struggle to keep from laughing. Finally he gave up. “We’re trying to take our minds from such thoughts so we can go in for dinner.”

He tossed the ball to Jack and moved farther into the yard. It was a bit over a hundred feet long; tree limbs hung over both sides, limiting the “passing lane” to maybe a third of the yard.

“Maybe we ought to go out front.” He lobbed the ball softly to Ed.

Ed’s laugh was accompanied by a return of the ball. “I’m not planning to run routes for you. I just thought it was a good way to calm down.”

“Funny guy.” He rolled his eyes, sending the ball back. The pass lacked the tight spin of Jack’s ball. “We ran the ball a lot on my team, but I had good hands, I’ll have you know.”

He couldn’t wait to find if that were true too. Okay, just throw the ball. He dropped back, halting his throw when the door opened.

Gene walked out, smiling. “You look like you played.”

“Started my last two years in high school.” Jack zipped the ball back a bit harder. Yeah, he was showing off, but he knew he had a good arm.

“Do you play for Harrison?” Ed threw the ball back to his dad, who caught it and handed it to Jack.

“No, sir.” Images of his last two games made his throw slightly wide. Ed moved quickly and managed to catch it. Jack raised both eyebrows. “Nice hands.”

“Yeah, he was good,” Gene said, catching the ball, “but his coach couldn’t draw up a pass play to save his job. Eddy probably could have gotten a scholarship if they ran more plays his way.”

Jack nodded toward Ed. “Go for it.”

Gene’s pass was well wide and over Ed’s head. It hit an overhanging limb and bounced back the way it came. “Maybe I’ll stick to catching for you.”

They both laughed as Ed returned the ball. “Let’s see you thread the needle.”

He stepped back and fired a perfect strike into Ed’s hands.

“You have good hands when I throw at you, but can you catch it on the run?”

“Is that a challenge?”

You’re the one who said you were a tight end. Jack squeezed his lips taut and took a breath. “Let’s see what you got.” About Andy Gallo: Andy Gallo prefers mountains over the beach, coffee over tea, and regardless if you shake it or stir it, he isn’t drinking a martini. He remembers his “good old days” as filled with mullets, disco music, too-short shorts, and too-high socks. Thanks to good shredders and a lack of social media, there is no proof he ever descended into any of those evils.

Andy does not write about personal experiences and no living or deceased ex-boyfriends appear on the pages of his stories. He might subconsciously infuse his characters with some of their less noble qualities, but that is entirely coincidental even if their names are the same. And while Andy leaves the hard sci-fi/fantasy for his alter ego, Andrew, in his mind a touch of the supernatural never derailed a good relationship.

Married and living his own happy every after, Andy helps others find their happy endings in the pages of his stories. He and his husband of more than twenty years spend their days raising their daughter and rubbing elbows with other parents. Embracing his status as the gay dad, Andy sometimes has to remind others that one does want a hint of color even when chasing after their child. About Anyta Sunday: A bit about me: I’m a big, BIG fan of slow-burn romances. I love to read and write stories with characters who slowly fall in love. Some of my favorite tropes to read and write are: Enemies to Lovers, Friends to Lovers, Clueless Guys, Bisexual, Pansexual, Demisexual, Oblivious MCs, Everyone (Else) Can See It, Slow Burn, Love Has No Boundaries. I write a variety of stories, Contemporary MM Romances with a good dollop of angst, Contemporary lighthearted MM Romances, and even a splash of fantasy. My books have been translated into German, Italian, French, and Thai.