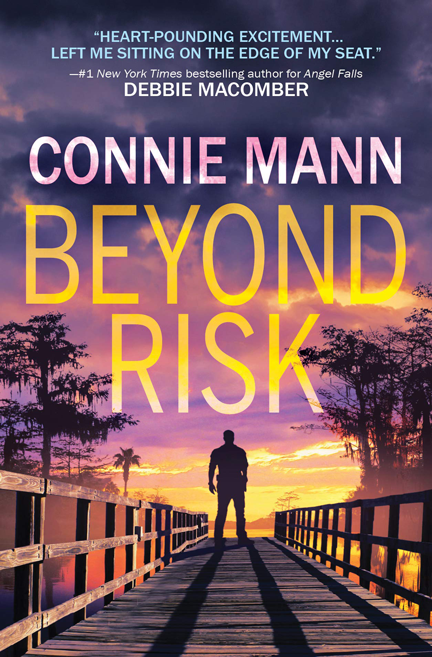 “Heart-pounding excitement…left me sitting on the edge of my seat.”—#1 New York Times bestselling author DEBBIE MACOMBER for Angel Falls

In Connie Mann’s BEYOND RISK, former Fish & Wildlife Officer Charlotte “Charlee” Tanner still carries the guilt of a tragic drowning accident that occurred on her watch. She hoped moving back home to the wilds of central Florida would provide a safe haven-until she learns the death was no accident, and she’s the intended target…

The river runs wild
Former Fish & Wildlife Officer Charlotte “Charlee” Tanner still carries the guilt of a tragic drowning accident that occurred on her watch. She hoped moving back home to the wilds of central Florida would provide a safe haven-until she learns the death was no accident, and she’s the intended target.

But no wilder than their passion
Tough and decisive, Lieutenant Hunter Boudreau loves his new job as a law enforcement officer with the Florida Fish & Wildlife Conservation Commission. Charlee is his best friend, so when she comes under fire, he’s not letting her out of his sight until the killer is caught. But Charlee won’t sit by and let anyone else die for her.

As danger closes in and Charlee and Hunter’s attraction threatens to consume them, Charlee has to decide if she can trust Hunter. And to save Charlee, Hunter will have to trust her, too.

While Hunter checked outside, Charlee popped the second batch of cupcakes in the oven, his words echoing in her mind. Her heart ached for him over the loss of his brother. She would have wrapped him in her arms and told him how sorry she was if she thought he’d allow it.

She, better than most, understood the kind of guilt that gnawed at your heart, the sense of failure when things went wrong that never really went away. She also knew responsibility and the need to protect those you cared about. In that way, she and Hunter were exactly the same.

She shook out her fingers to get the blood flowing after clenching the wooden spoon so tightly. She knew every bit of the frustration churning inside him. But even though she knew things were different with Hunter, he still sounded just like her brothers. Or Rick. She wouldn’t tolerate a man telling her what to do “for her own protection.”

She snorted. Please. Capable woman here. Former cop. No pats on the head or macho swagger, thank you very much.

Hadn’t she followed her instincts and done what needed doing today? It had been exactly the right thing—no matter what he thought—and had shored up her battered confidence.

She allowed herself a little smile at that, then let out a breath. Enough. She had far more important things to think about than her muddled feelings for her maddening, altogether tempting best friend.

A bowl of chocolate fudge frosting sat on the table, and she was using her pastry tube to decorate the first batch of cupcakes when Hunter strode back in, his face void of all expression. She glanced up and went back to what she was doing. She didn’t have time to decipher what he was thinking. She didn’t care, either. At least that’s what she told herself.

He walked up behind her, and she could smell his woodsy scent and the heat that emanated from him. “Look, cher, I know you don’t like it, but I’m trying to protect you—”

He didn’t get any further than that. Without conscious thought, Charlee whirled around and shot half the tube of chocolate frosting right in his face, then calmly went back to her cupcakes. “Spare me the macho crap, Lieutenant. I don’t want to hear it.”

The silence went on for several beats, and Charlee had a moment to wonder if she’d gone too far. But then she heard him start to laugh. She looked up through her lashes and saw him tip his head back and laugh like she’d never heard him laugh, with his whole body.

She tried to keep from smiling, but finally gave up and joined in.

She was so distracted by the pull his laughter stirred in her belly that she yelped in surprise when a big glob of frosting landed on her nose. Followed immediately by another blob on her right check. And then her left. She tried to fight back with her pastry tube, but his assault was relentless, swiping frosting off his own face and transferring it to hers.

“Two can play this game, cher, and I’m betting I’ll win,” he warned, adding another layer to her chin.

“Oh yeah?” She went on the offensive, and they went back and forth, smearing frosting on each other.

Laughing and breathless, Charlee took a step back, stunned at the playfulness from such a serious man. She opened her mouth, trying to decide what to say, when his eyes met hers. Their laughter stilled as they studied each other. Behind the frosting and the laughter still dancing in his eyes, Charlee saw something more. Attraction, certainly. But something that went much deeper, that reached beyond friendship and caring and connected them in ways she was almost afraid to examine too closely.

Charlee read the clear invitation in his eyes, and suddenly, her arms were around his neck, his wrapped around her back, and his hard mouth came down on hers. But where she expected aggression, he gave her featherlight kisses and licked the frosting from her lips, a smile on his own.

A shiver shot straight to her core, and she clutched his shoulders as he pulled her flush against him. The bands of muscle under her hands tightened, and she could feel the effect she had on him, but his arms didn’t feel like a cage, the way Rick’s had. No, Hunter was different. Danger clung to him like a second skin, but it was never directed at her. He growled low in his throat as he nuzzled her neck, and Charlee shivered, burrowing closer.

She shifted, giving him access to her neck, and ran her hands over his shoulders, down his arms, loving the way his hard grip made her feel safe even as his roaming hands and woodsy scent tempted her, invited her to move closer, to explore the fire that erupted whenever their skin touched.

When he nudged her lips open, she opened her mouth, welcomed his tongue in to dance with hers, hearts pounding, the kiss sparking and bursting to life until all Charlee felt was heat—his, hers, theirs. Being in his arms was like nothing she’d ever experienced before.

You can find Connie Mann at her website: https://www.conniemann.com/

One Response to Beyond Risk by Connie Mann