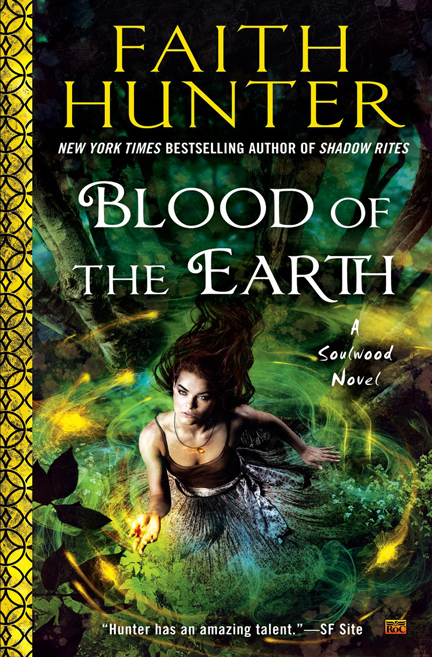 For a compelling urban fantasy that will draw you in and leave you unable to put the book down until you’re done, grab a copy of Faith Hunter’s BLOOD OF THE EARTH, first in the Soulwood Series. I promise you won’t be disappointed!  5 Hearts, SJ, Romance Junkies Having never read Faith Hunter before, I was so incredibly excited to read this incredible book and add a new auto-buy author to my list! Read the review below…

BLOOD OF THE EARTH is the first of the Soulwood books, a brand new series from the New York Times bestselling author of the Jane Yellowrock series. But this urban fantasy clearly stands alone, and it’s amazing!

Nell Ingram has left the cult she was raised in, and things have gotten a little hairy. The cult wants the land her dead husband left her. There are strange things in the forest, and there’s something even stranger about Nell.

Thanks to the interference of skinwalker Jane Yellowrock, Nell’s life continues to be in danger. She helped Jane free a captive vampire some time ago, and now the cult she left has set its sights on reclaiming Nell  and her land. Living off the radar comes easily to Nell, who farms her own food and manages her own resources. Or at least, being invisible to the government would have been easy–if Jane hadn’t just referred PsyLed—the Homeland Security agency that polices paranormals, to ask Nell for help on a case. The daughter of the Master Vampire of Nashville has gone missing.

Nell can’t say no when more girls start going missing. But she doesn’t need anyone digging too deeply into her magic, a strange power that ties her to the surrounding forest—through blood. Nell’s magic is different than anything the others have seen, and she prefers to be left alone. But soon that’s not possible.

I am brand new to Faith Hunter, and I was worried I might get lost. But I followed along with no problem whatsoever. Hunter has crafted a fantastic world around Nell and her magic. There are shifters and vampires, and darker powers grounded in earth and the elements. The characters are three dimensional, and I found myself intrigued with the team that grows to include Nell. Even better is watching Nell blossom from an isolated, independent young woman to someone who learns to trust others, slowly but surely, understanding that help just might come to hers should she ask for it.

The cult where Nell grew up had depth. Not a mindless, stereotypical brainwashing machine, but a group of people who stand for something. I liked that Ms. Hunter built Nell’s family as more realistic with goals and needs, not just a superficial foil to build conflict.

Nell is never a pushover, despite being ignorant of the world around her. She’s a fascinating character, and I can’t wait to see what she gets into next. The book was so good I went and bought the first Jane Yellowrock novel, SKINWALKER. And now I’m addicted!

For a compelling urban fantasy that will draw you in and leave you unable to put the book down until you’re done, grab a copy of Faith Hunter’s BLOOD OF THE EARTH, first in the Soulwood Series. I promise you won’t be disappointed!

For more information on the Soulwood series, go to Faith Hunter’s website