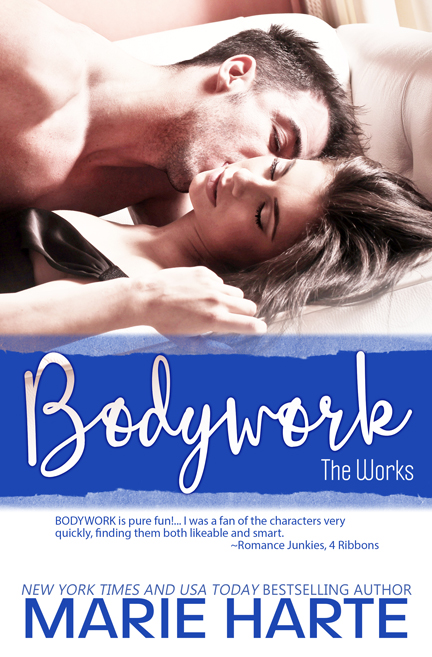 How about a fun, steamy, contemporary romance to spice up your week? BODYWORK, the first book in The Works series, is on sale for just .99!

With ties to my McCauley Brothers, The Donnigans, and Body Shop Bad Boys series, BODYWORK features the iconic Jameson’s Gym, where many of my characters like to go to work out. 🙂 And work out they do.

I’ve been writing contemporary romances for years now, and in particular, there are  group of books set in Seattle in which characters run into other characters in other series. It’s great fun for me to have a character use a certain gym, visit a certain coffee shop, or use a certain construction company, knowing those places and people are real in the world I’ve created.

Jameson’s Gym came about many years before my McCauley Brothers series for Sourcebooks, and I thought it would be fun to have new characters brush up against older ones.

Take a look at Shane’s story in Bodywork. Here’s one sexy Marine ready to find love with the right woman, even if the first times he runs into her things don’t go so well…

Being sexually attracted to Mr. Tall, Dark, and Rude hadn’t been on Shelby’s agenda. He spilled her coffee. She found him naked on her massage table. Now she just wants him out of her massage clinic before he recognizes her…or she jumps him. Not professional. Not at all.

But when Shelby and Shane meet again, the third time’s the charm. Shane has found his match in the sexy, intelligent woman he can’t stop thinking about. Shelby is scared, because she might grow to like this guy. With fate on their side, they might both have a shot at a love they’d stopped looking for.

His smile widened into a grin big enough to split his face wide open. “Well, now. My weekend is complete.”

She felt herself blushing and forced herself to frown. “You are so full of it.”

“Of bad lines, yeah. Guilty.” He moved faster than she expected and latched onto her arm. He wore a pair of jeans and a tee-shirt and looked good enough to eat. Her heart raced uncontrollably.

Oh man. I am such an idiot. Remember Rick.

“Now before you accuse me of stalking again, I should tell you I work here.” He pointed behind him to the building. “Want to see?”

He chuckled and walked her inside. They passed two security guards who nodded at Shane. Once in the elevator, he pulled her closer.

She put a hand on his chest when he looked like he might kiss her—because she wanted him to. “Whoa. What’s that about?”

“Just a kiss to say hello.” He grinned, and a dimple flashed in his cheek.

“Hello.” She blew out a breath, quietly, but gasped when he kept her hand on his chest. “Let go.”

The elevator door opened, saving her from looking like a total fool.

“My floor. Come on.” He left the elevator with her in trace. “Harmon & Sons is designing the new sports complex for the Seahawks, you know. An extra training facility near the stadium.”

“Nice.” Impressive, but she didn’t want to seem bowled over.

As they walked down the quiet hallway, she noted the lack of people. “Where is everyone?”

“Gone. We at Harmon & Sons appreciate our down time.” He winked at her. “I had some work to catch up on, so I came in to finish up. Here.” They entered a spacious room. “My office.”

“You said that already. How about, ‘Gee Shane. This is so impressive. I’ll give you that kiss you wanted earlier.’”

Shelby snorted. “Dream on. It’s not that great.”

He sank into the couch facing his desk. A leather couch, facing a grand desk that sat across from a drafting table. He had a small refrigerator in the corner and what looked like another door, to maybe a bathroom or a closet. Wooden blinds shuttered the windows on either side of the door. It was more than a nice office. The place smelled like high class and money all rolled into one.

Shane was so out of her league.

The thought annoyed her.

Enthralled by a plain Jane with a humble background? Well, why not? Why the hell wasn’t Shelby good enough for him, anyway? “Kiss me.”

“Right here. In your designer office.”

He didn’t refuse. But instead of coming right to her, he closed the door to his office. It snicked shut, and then he was right there in front of her.

“You’re quick,” she said, impressed despite herself.

Flattered but not convinced, she took back control of the situation. Rick the *rick had rejected her. This guy had run her down and appeared to like the look of her. Well, let him prove it. If nothing else, she’d be rid of this dry spell when it came to men.

The excitement of what she considered doing made the circumstances feel unreal.

“Shelby?” Shane asked, his voice hoarse. He stared down at her, his breathing fast, uneven.  “I’m going to kiss you.”

“You’re going to do more than that.” She dragged his head down and plastered their mouths together. A rough mating of lips and tongues and teeth that alerted every cell in her body to wake the hell up. Right now.

And don’t miss Mac and Maggie in Working Out, or Trevor and Emma in Wetwork, books 2 and 3 in the trilogy.