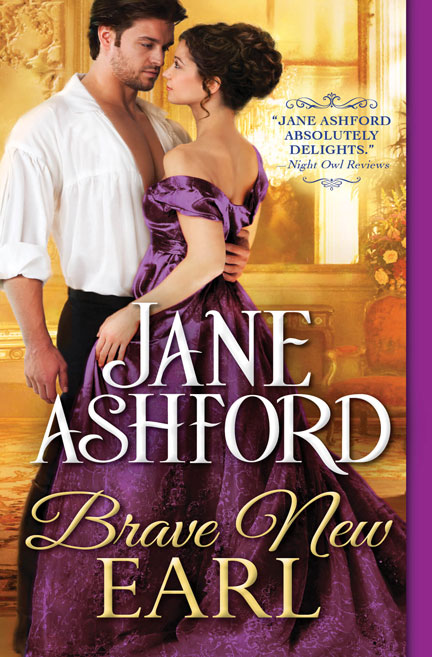 In Jane Ashford’s BRAVE NEW EARL, Miss Jean Saunders is a cousin by marriage. She doted on Benjamin’s late Countess, and can’t bear it when she hears rumors that the Earl is too bereaved to care for his young son. She arrives on the scene to evaluate his fitness as a father, and if necessary, to take his son away. Widower Benjamin Romilly, Earl of Furness, has given up hope of finding happiness. His wife died in childbirth five years ago, leaving him with a broken heart and a child who only reminds him of his loss.

Miss Jean Saunders is a cousin by marriage. She doted on Benjamin’s late Countess, and can’t bear it when she hears rumors that the Earl is too bereaved to care for his young son. She arrives on the scene to evaluate his fitness as a father, and if necessary, to take his son away.

Toward the far end of the attic, Jean came upon a row of leather trunks bound in brass. Resettling her lamp securely, she opened the first. The scent of camphor wafted out at her. Pushing aside a layer of tissue paper, she unearthed a swath of satin brocade in an exquisite shade of peach. Although the fashion of another era, it was one of the loveliest gowns she’d ever seen.

There was no one around, and she was so tired of the few outfits she had with her. She couldn’t resist. She slipped off her much plainer gown, placing it out of the dust on a sheet of tissue, and slithered her way into the peach creation.

The dress was a bit large on her. Fortunately, it laced up the side so she could reach to pull it tighter, but the shoulders still threatened to slip off. Her shift and stays showed above the low neckline, and without the elaborate underpinnings such a garment required, the skirt sagged around her in heavy folds. Even so, she felt very grand.

Jean whirled and nearly lost the dress. She frowned at Lord Furness, who stood near the head of the attic stair, as she pushed the shoulders back into place. “What are you doing here?”

“Yes, but you went riding.”

“And I returned.” Benjamin strolled toward his disheveled houseguest. In his ancestress’s gown, Miss Saunders was an unsettling combination of little girl playing dress-up and lush courtesan, with her clothes falling off and her curling hair making a determined break for freedom.

She gathered the heavy skirts and retreated to a rank of trunks a little distance away. “I was just… I’ll put on my own gown.”

“But I came up to help you look for toys for Geoffrey.” It was an increasing delight to tease her. There was something so charming about the look she got, which said she knew precisely what he was up to and refused to stoop to acknowledge it. And yet she couldn’t help but react.

“Only a hoard of finery.” Benjamin walked along the row of trunks and glanced inside them. He picked up a satin coat. “I think I remember my grandfather wearing something like this, with lots of lace at his shirtfront. Perhaps it was this very coat.” He held it up and looked closer. “I’m not sure. He died when I was around Geoffrey’s age.” He smiled at his disheveled companion. “Grandpapa didn’t care much for change at the last. Or for what people thought of his appearance. He wore what he liked.” Geoffrey would have appreciated that attitude, Benjamin thought. “He had a dueling scar across his cheek.” His hand went to his own face to demonstrate. “A bit puckered and quite frightening, as I recall. They don’t seem to go together—all this frippery and bloody sword work.”

“I imagine gentlemen took off their coats when dueling,” replied Miss Saunders.

“You should try it on,” she added in an odd tone.

He looked at her, hands clutching the brocade bodice to keep it from sliding off, a beam of sunlight shining through the uninhibited glory of her hair. Holding her gaze, Benjamin slowly took off his coat. “No wigs,” he said. “I draw the line there.”

“I haven’t found any,” she answered breathily.

He donned the bright satin garment. It fit well enough, only a little tight in the shoulders. It felt strange to have wide skirts around his legs. He made an elaborate bow. “Pon rep, my lady, I am so pleased to see you. I hope I find you in better health?”

“What do you mean, better?”

Benjamin straightened. “I’ve been concerned about you since—”

“I’m fine,” she interrupted. “My…outburst in the library was quite uncharacteristic, I assure you. It won’t happen again.”

“No apology is necessary.”

“I wasn’t apologizing.” Coppery glints snapped in the depths of her eyes. “Only informing you that all is well.”

He didn’t believe her, though he couldn’t have said why. Her bearing and expression were calm, her manner quelling. Clearly, she didn’t want to talk about the bout of weeping, and he had no right to press her. Why should he wish to? “I don’t know how ladies moved about in those gowns.” He indicated the sweep of peach brocade trailing over the floorboards.

“With stately elegance,” she replied.

“That is to say, very slowly. Have you seen the sort of shoes they wore? Teetering along on four-inch heels must have made it hard to run away.”

“From what?” she asked with a quizzical glance.

“Anything.” Benjamin had spoken randomly. All his attention was on her, leaving his tongue unsupervised. “Bears.”

It was a delightful sound. Benjamin realized he hadn’t heard it nearly often enough. Irresistibly drawn, he stepped closer. “Or impertinent admirers.”

“The gentlemen wore heels, too,” Miss Saunders said. “So it would have been an equal race, mincing along the cobblestones in a satin-draped procession.”

She looked up at him, still smiling. Her eyes were suffused with warmth now, her lips a little parted, and Benjamin couldn’t help himself. He moved closer still and kissed her.

Just a brush of his mouth on hers, an errant impulse. He pulled back at once.

She leaned forward and returned the favor, as if purely in the spirit of experiment. Benjamin felt a startling shudder of desire.

In the next moment, she’d twined her arms around his neck, and they were kissing as if their lives depended on it. He buried his fingers in her hair, as he’d been longing to do for days. It sprang free and tumbled over his hands, a glorious profusion of curls. Hairpins rained onto the attic floor.

Then she pulled back and blinked at him, her eyes wide, dark pools. Her arms dropped to her sides. She took a step away, and another. “Oh.”

The small sound was a breath, a worry, an astonishment. Benjamin struggled with his arousal, glad now of the long, concealing coat.

Miss Saunders put her hands to her wild crown of hair. The lovely lines of her body were outlined in peach brocade and sunlight. “Oh dear.”

“I could help pin it up, if you like.” Benjamin bent and gathered a handful of hairpins.

“My hair is beyond deftness. It has to be wrestled into submission.”

He nearly lost his careful control at the phrase and the thoughts it elicited. “I have strong fingers.”

Jane Ashford discovered Georgette Heyer in junior high school and was captivated by the glittering world and witty language of Regency England. That delight was part of what led her to study English literature and travel widely. She’s written historical and contemporary romances, and her books have been published all over Europe as well as in the United States. Jane has been nominated for a Career Achievement Award by RT Book Reviews. She lives in Los Angeles, California.