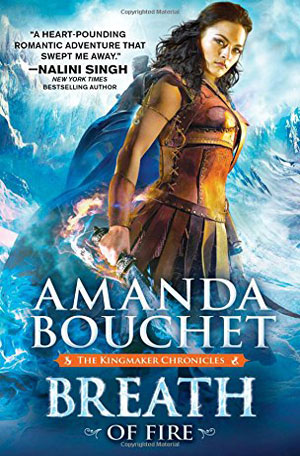 A note to readers of The Kingmaker Chronicles from Amanda:

Breath of Fire comes out on January 3rd and I couldn’t be more excited about it! I hope that readers who met Cat and Griffin and followed their exploits in A Promise of Fire will be looking forward to this second installment in The Kingmaker Chronicles, and I hope that new readers will be interested in giving this fantasy romance trilogy a try. The story picks up right where A Promise of Fire left off and with a shocking moment of truth: Cat’s secrets are finally revealed to all.

A note to readers of The Kingmaker Chronicles from Amanda:

Breath of Fire comes out on January 3rd and I couldn’t be more excited about it! I hope that readers who met Cat and Griffin and followed their exploits in A Promise of Fire will be looking forward to this second installment in The Kingmaker Chronicles, and I hope that new readers will be interested in giving this fantasy romance trilogy a try. The story picks up right where A Promise of Fire left off and with a shocking moment of truth: Cat’s secrets are finally revealed to all.

But with the cat out of the bag (pun definitely intended!), important plans can now form to move Thalyria toward unification under Cat and Griffin’s joint rule—plans that will certainly keep Beta Team on their toes. But while Cat’s violent past and lingering self-doubt still haunt her on a deep level, Griffin won’t let her back down from the fate she’d love to avoid. As Griffin propels her toward her inevitable destiny and Cat tries to come to terms with the prophecy that’s haunted her for eight years, readers can expect plenty of adventure and danger, more of Cat’s smart-mouthed humor, exciting Beta Team moments, and a romance that heats up to positively scorching levels.

Friendships solidify into unshakable bonds, and perilous quests lead the members of Beta Team into uncharted territory where monsters, magic, and mayhem abound. With Breath of Fire, I hope that readers get swept away and caught up in the emotion and adventure as Cat and Griffin try to navigate their developing and intensely passionate relationship while also taking on the daunting and dangerous task of conquering the world. But most of all, I hope you simply enjoy the book! SHE’S DESTINED TO DESTROY THE WORLD…

“Cat” Catalia Fisa has been running from her destiny since she could crawl. But now, her newfound loved ones are caught between the shadow of Cat’s tortured past and the threat of her world-shattering future. So what’s a warrior queen to do when she knows it’s her fate to be the harbinger of doom? Everything in her power.

Griffin knows Cat is destined to change the world—for the better. As the realms are descending into all-out war, Cat and Griffin risk sacrificing everything they’ve fought for. Gods willing, they will emerge side-by-side in the heart of their future kingdom…or die trying.

Waking up from a deep, healing sleep reminds me of rushing toward the surface of a lake, brightness beckoning from above and bubbles fizzing all around me.

Consciousness threads through me in a delicate weave. It’s afternoon. The air smells of bright sun, hot stone, and endless days of summer drought. Insects chirp, their droning song a parched melody, the heat so thick I could cut it with a knife. I don’t question the time of day, just which day, and I’m guessing it’s not the same day I fell asleep. And almost died. Again.

Under the sheet, I brush my fingers over the tender skin on my stomach, finding the raised bump of a fresh scar there. Just one more mark to join the others, inside and out.

I look toward Griffin’s side of the bed, not surprised to find it empty and the sheets cold. He has things to do, a realm to run.

I sigh, which is absurd. I never sighed until I met Griffin.

The indent of his head still creases the pillow, and I slide my hand into the hollow, thinking about how far we’ve come since he abducted me for my Kingmaker Magic and I fought him at every turn.

But Griffin got more than he bargained for with me, and I still can’t bring myself to tell him the worst.

Harbinger of the end. Destroyer of realms.

I squeeze my eyes shut, craving the blissful avoidance of heavy sleep again. But I’m not tired anymore, and half-truths and glaring omissions fester in my belly, cold blocks of dread sitting right there under the heat of my new scar. Who I am. The dreadful prophecy. I wasn’t even truthful about Daphne’s lurking and threats, and hiding things from Griffin is exactly what landed me in this bed, injured and aching. Griffin’s former lover knew what she was doing when she hid in the shadows and threw a knife into my gut. What she didn’t know was that I would pull it out and throw it back.

The door opens, and I turn my head, my heart thudding at the sight of Griffin. Tall, broad, muscular but sleek, he stalks into the room like a predator, his gait balanced and sure, his glittering, gray eyes focused entirely on me. Inky hair, a hawkish nose, that stubborn jaw, and thick, black stubble make him look hard and intimidating. With his sword strapped on and his dark brows lowered, he’s a warlord on the prowl.

I shiver. I couldn’t want him more.

A lightning storm sizzles to life in my magic-charged veins. I look at Griffin, feel him near, and I can ignore all the terrifying things that make me want to crawl inside of myself and disappear. He stops next to the bed, and my blood simmers with heat and need. I wonder what he’ll do to me. What I’ll do to him.

I reach for him, but Griffin crosses his arms and stares down at me from above.

My hand hangs awkwardly in the air, and my heart hovers along with it. An awful tightness clamps around my throat, turning my voice to gravel. “I can still feel you inside me.”

His stony expression doesn’t change, but his iron gaze dips to my bare breasts. When his eyes flick back up, they’re like frosted granite. “Have you enjoyed making a fool out of me?”

The bottom of my stomach drops out with sickening force. I pull the sheet up to cover myself, clutching it hard to keep my hands from trembling. It doesn’t work. Adrenaline roars through me, making me shake.

“What do you mean?” My eyes are wide, my words reedy. Guilty. It’s a good thing I’m not a gambler if this is my game face. But I’ve never had so much to lose.

Griffin reaches out and rips the sheet from my hands and right off the bed. He holds on to it. “I think you know. Or are there too many lies to choose from?”

I sit up, shame and anxiety splashing red-hot color all over my naked skin. At the realm dinner, Griffin vowed to uncover my secrets. I didn’t think he’d do it this fast. Award-winning author Amanda Bouchet grew up in New England and studied French at the undergraduate and graduate levels, first at Bowdoin College and then at Bowling Green State University. She moved to Paris, France in 2001 and has been there ever since. She met her husband while studying abroad, and the family now includes two bilingual children, who will soon be correcting her French. Win one of ten copies of A Promise of Fire by Amanda Bouchet, the first book in her The Kingmaker Chronicles series, plus a signed bookplate!