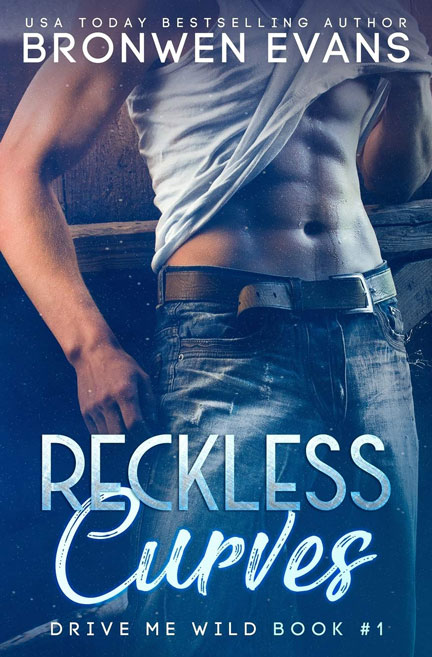 RECKLESS CURVES: Bad Boy Autos, Drive Me Wild Series Book #1 by Bronwen Evans. Injured former Formula One racing car driver Marcus Black, opens Bad Boys Auto, with his old racing team head mechanic, Thomas (Tom) Lorde, employing ten mechanics in all. European luxury cars get them excited, Ferrari, Maserati, Porsche, just as Prada, Gucci, Chanel do for women. The men who work for Bad Boys Auto, feel the need for speed. Their lives are lived in the fast lane – fast cars and fast women. None of these men are interested in living life in the slow lane, especially the slow lane to love.

Kendra slowly eased off the pedal as she sped down Hollywood Boulevard, least she speed her way into a ticket. She didn’t want anything to kill her buzz today.

She was driving like her brother, Marcus Black drove on the race circuit. Speed kills you idiot. She laughed out loud. She was on a natural high from her successful meeting this afternoon and she knew it. Finally, she understood why her brother craved speeding around a race-track—the adrenalin. The feeling was addictive…

Waving from New Zealand where we are in Covid virus lockdown. I know many of you around the world are in similar situations.

It’s hard to be releasing a book at this time, but hey, I’m trying to carry on and keep myself busy. I’m writing and of course doing loads of reading. Thank goodness for eBooks!

Today I’m talking about my new release, Reckless Curves: Bad Boy Autos. I released this on 30 March (in book and eBook) and it’s the first book in my new Drive Me Wild contemporary romance series. It’s a brother’s best friend, wrong side of the tracks, secret baby trope. I hope you like how I’ve managed to accomplish a secret baby in this day and age.

I usually write Regency historical romances but I wanted a bit of a change. I’ll still be writing Regency romances, but I’ll also be writing the Bad Boy Autos stories.

I decided to set my series in Bad Boys Autos because I’ve always been a fan of European luxury cars and I LOVE the Fast and Furious movies. I’m a huge Vin Diesel fan.  I wanted to have characters who all work in, or are connected to, a high-end car customization workshop. Who better to run this than an ex-racing car driver and his head mechanic.

Injured former Formula One racing car driver Marcus Black, opens Bad Boys Auto, with his old racing team head mechanic, Thomas (Tom) Lorde, employing ten mechanics in all. European luxury cars get them excited, Ferrari, Maserati, Porsche, just as Prada, Gucci, Chanel do for women. The men who work for Bad Boys Auto, feel the need for speed. Their lives are lived in the fast lane – fast cars and fast women. None of these men are interested in living life in the slow lane, especially the slow lane to love. Thomas (Tom) Lorde’s morning couldn’t get any worse. One call changes everything. Apparently he’s a dad. He should be on the phone to his lawyer. He wouldn’t put it past a woman—any woman—to lie to get at his hard earned money. His mother trapped his father into marriage and then left them both for deeper pockets. But when the news is delivered from between the sweet lips of Kendra Black, his best friend’s out of bounds little sister, and his one major ‘f’king’ mistake, he knows he’s screwed and that she’s not lying.

Kendra Black knew contacting Tom would be a mistake. Three years ago, he’d made it very clear he had no feelings for her. He slept with her and then flew to Europe without a backward glance. However, he left more than a broken heart behind. He might not want her, but now that’s he’s back in California, her son, their son, Connor (Con) Black, deserves to know his father. What she hadn’t expected was Tom’s old-fashioned lap of honor. He wants to marry her. She can’t deny the physical attraction is still there. He might be okay with a marriage based on hot, raw, animalistic sex and only sex, but she wants more. She deserves a man who loves her and she refuses to wave the checked flag until he gives her his heart.

“You look different tonight,” Tom said as he took the chair Stella had vacated.

“I’m celebrating.” At his raised eyebrow Kendra added, “Today I signed to be a backup singer for James Tan.”

His grin widened. “Way to go. I knew you could do anything you set your mind to.”

She wanted to hug him just for those words. At sixteen when she’d been declared in remission, he’d been the one to tell her, that you shouldn’t let anyone stop you from reaching for your dreams. He’d never treated her as the sickly, weak, fragile girl most people saw when they looked at her.

He signaled for the waitress. “A bottle of your finest champagne.”

She couldn’t help herself. “Aren’t you scared Marcus might see us talking.”

“Even he won’t mind me helping you celebrate such a milestone. Besides he looks as if his mind is elsewhere.”

She tore her gaze from Tom and looked at her handsome brother. Yip, Stella was working her magic. Her best friend could make guys beg for just a smile and it appeared Marcus was no different.

“I’m waiting for Marcus to see you are here, and wonder how you got into the bar.” Her face heated. “I suspect with you looking like that the bouncer didn’t really look at the ID very closely,” Tom added with a naughty grin on his lips.

“Are you going to tell on me?”

He leaned closer. “I’d be stupid to do that. I’d rather ask for a reward for not ruining your evening.”

This time it was her turn for her lips to form a naughty grin. “Reward?”

Tom winked. “A kiss should seal my lips.”

They had flirted like this hundreds of times before. Tonight, she wasn’t going to back down. “For the kiss I’ll give you, you most definitely want your lips unsealed.”

Tom threw a glance over his shoulder. She followed his gaze and saw Marcus was no longer standing there. Nor was Stella.

“I like how you think,” and he took her chin between his fingers and slowly lowered his lips to hers.

OMG he’s finally going to kiss me. She held her breath.

When his lips touched Kendra’s, her whole body caught fire. She moved closer, lifting her hand into his hair, bringing them closer so their chests touched. He deepened the kiss, slowly parting her lips, before driving his tongue into her mouth, sweeping and swirling his tongue with hers. She’d never experienced a kiss like it. She’d dreamed of kisses from Tom … reality blew her imaginings out of the water. His kiss was filled with such passion, if she’d been standing her legs wouldn’t have held her up. She put her whole self into returning fire with fire, showing him what was in her heart.

When they parted, she knew one kiss would never be enough.

“Be mine for tonight. Only tonight, that’s all I have,” he breathed in her ear.

She couldn’t talk, speechless with victory. She merely nodded.

“Let’s get out of here,” and with her hand swallowed by his very large one, they left the bar.

This was her night.

Fun facts about this book…

Please tell us a little about the characters in your book. As you wrote your protagonist was there anything about them that surprised you?

I usually find people, and therefore characters, are shaped and moulded by their upbringing. My H/h are no exception.

Tom’s mother walked out when he was 12 leaving him with a drunken non-functioning father. Needless to say he has no real idea about happy families.

Kendra spent her early teenage years battling leukaemia, and her family life left a lot to be desired too. So her view of life is very different. She wants to live it to the fullest.

What I found fascinating was something that Tom says right at the beginning of the book, would be the key to what he really wants out of life, not what he thinks he wants or deserves. At the end of the book it took Kendra to point this out to me, and I thought how wonderful! She is so insightful and she tells Tom in the epilogue.

What do you want people to take away from reading this book?

I think I wanted readers to understand it’s never too late and that you never give up. I’ll let one reviewer sum that up and she does it perfectly…

“A book about regrets, trust once lost that has to be regained, forgiveness, and second chances. The story of Kendra and Tom just tugs at your heartstrings and you find yourself rooting for them to make it and get the HEA they want with each other.”

Giveaway:  A copy of LOVE ME: Coopers Creek Book #1 on book or eBook format.

Simply leave a comment telling me where Tom flew off to.

About Bron: USA Today bestselling author, Bronwen Evans grew up loving books. She writes both historical and contemporary sexy romances for the modern woman who likes intelligent, spirited heroines, and compassionate alpha heroes. Evans is a three-time winner of the RomCon Readers’ Crown and has been nominated for an RT Reviewers’ Choice Award. She lives in Hawkes Bay, New Zealand with her dogs Brandy and Duke.

You can keep up with Bronwen’s news by visiting her website—www.bronwenevans.com
and get a FREE book by signing up to her newsletter http://bit.ly/2dWr4gb, or Facebook: https://www.facebook.com/bronwenevansauthor, or Bookbub: https://www.bookbub.com/authors/bronwen-evans