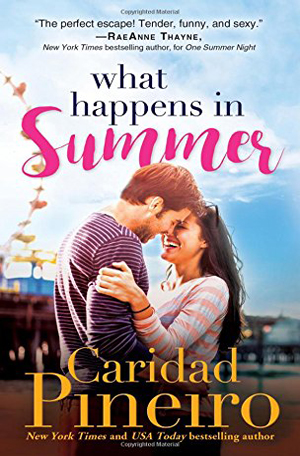 She knows the kind of man he is;

The kind who breaks hearts.

But a hot summer at the Jersey Shore

Might be just what they need to light up their lives… As the only daughter of a single mom, Connie Reyes swore she would never put herself or her child in a similar position. But when she runs into oh so tempting Jonathan Pierce at a wedding, she knows she must stay away. She’ll fall for him—hard. And he’s not the type to stick around.

Ever since he left town after their teenaged fling, Jonathan hasn’t been able to forget about Connie. He can’t wait for the wedding—to show her the man he’s become. And when the night finally comes, their mutual desire will lead to unexpected consequences neither of them were prepared for…

Jonathan Pierce stared hard at the mirror, wondering what Connie Reyes might see tonight when she and her friends came over for the dinner his brother Owen had arranged. What Connie might think after so much time had passed.

The teen she had known seven years earlier was gone as was the man she’d run into shortly after Hurricane Sandy.  That man had been replaced by one who had known his share of hardship and success. Barely perceptible laugh lines that hadn’t been there that last summer bracketed his mouth and eyes. There was a thin scar above one brow thanks to a crash while testing a new vehicle prototype on the Bonneville Salt Flats. Another jagged white line on his jaw was courtesy of shrapnel when a hydrogen fuel cell had unexpectedly exploded in their lab.

He looked away and leaned heavily on the edge of the vanity, noting the other assorted nicks and scars on his hands. They were the hands of a man who had lived life to the fullest and made himself what he wanted to be and not what others expected. He knew he’d sometimes hurt people with his choices, especially his older brother Owen, who’d had to shoulder the burden of the family business as well as their father’s ire whenever one of Jonathan’s escapades caught the attention of the media.

He’d gotten used to the interest the press had in him. After all, he was the renegade son of a wealthy family. A self-taught inventor who had sold his first small invention for millions. He was now revolutionizing the motor vehicle and battery industries with his innovative designs, unconventional methods, and fearless experiments.

He had brought idea after idea to life with detailed research and hard work. There had been failures along the way, but that had only made the successes that much more enjoyable. He had celebrated those successes with his team, his brother, and a bevy of actresses and models who were only too keen to be seen on the arm of a rebellious multi-millionaire who might soon be a billionaire if his company’s stock prices continued to climb.

Only… none of those women could hold a candle to Connie.

Connie, who he would see in just a few hours thanks to his brother. Owen had finally decided to fight for Maggie Sinclair, and he was happy that his brother was following his heart.  But while Jonathan would do almost anything for Owen, he wasn’t happy about having to spend time with Connie.

Smart and beautiful Connie, he thought with a sigh and a shake of his head.

He’d managed to avoid her for the last several years. Sure, he’d seen her after Sandy and occasionally from afar when Maggie and her friends had come down to Sea Kiss. Or every now and then when he’d gone to some business event in the city.

He’d tried to tell himself he didn’t like the sleek professional woman she’d become. That she wasn’t prettier than ever. He tried not to imagine peeling off those elegant business suits to reveal the real woman beneath. But he was lying to himself.

He had never really gotten over the Connie Reyes that had emerged that summer they had shared.  The woman who had learned to live for the moment and have fun.  Who had been carefree and willing to explore their love. He doubted he would ever forget that women and wondered if she was still there, trapped inside her very prim and proper suits.

Maybe he’d find out tonight, he thought, and prepared himself for what might be a very difficult dinner.

Connie Reyes splayed her hand across the nervous butterflies in her stomach that were beating their wings so violently, she felt like throwing up. She was tempted to beg off from dinner with the Pierce boys, only Maggie needed her moral support and Connie never disappointed a friend. Especially Maggie, who was like a sister.  She’d do anything for Maggie, even suffering through a meal with Jonathan Pierce.

“I’m just fine,” she lied, but it was clear from Emma’s meaningful stare that her friend suspected something was up as they followed Maggie onto the patio and to the long row of tall privet hedges that separated the two Jersey Shore mansions.

She tamed the flutters much as she did when arguing a case before a judge and trudged along behind Maggie as they eased through the hedges and approached the entrance to the Pierce mansion. They had barely reached the front porch when Owen threw open the door, a big friendly smile on his handsome face.

He welcomed them warmly, but Connie couldn’t resist mumbling to Emma, “Said the spider to the fly.” As much as she wanted things to work out with Owen, she still worried about how Maggie would be hurt if they didn’t.

Emma jabbed her in the ribs and luckily, it seemed as if Owen either hadn’t heard her comment or if he had, was choosing to ignore it. She gave him props if it was the latter, since it indicated he was truly trying to be nice for Maggie’s sake.

They quickly walked through the foyer and living room and back to the dining area. Jonathan was in the kitchen, an apron over his jeans and T-shirt. The T-shirt hugged his broad, muscled chest and laid bare the powerful muscles of his arms. His light brown hair still had the kiss of the summer sun and was tied back from his face, revealing the sharp lines of his features.

He looked older, but still so handsome.

She had thought she could handle this dinner for her friend’s sake.  That she could face Jonathan and not get caught up in the emotions from years past.  But it was impossible to forget the way he’d held her in his arms, a dimpled smile on his lips, his sea-blue eyes bright with humor and love. With that memory, the flutters in her stomach were replaced by an ache in the region of her heart.

2 Responses to Caridad Pineiro WHAT HAPPENS IN SUMMER