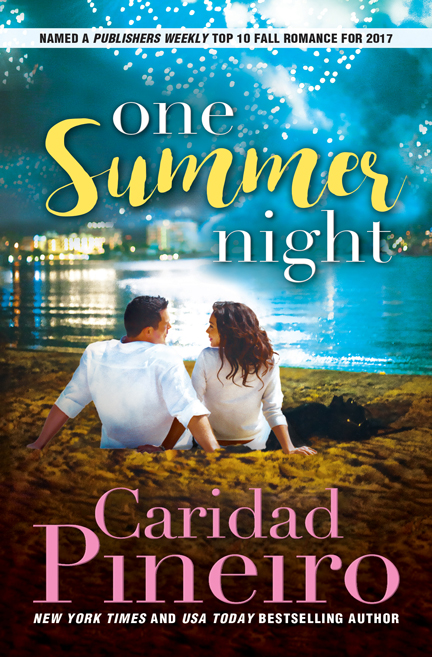 In Caridad Pineiro’s ONE SUMMER NIGHT…Maggie Sinclair has tried everything to save her family’s business, including mortgaging their beloved beach house on the Jersey shore. But now, she’s out of options.

The Sinclair and Pierce families have been neighbors and enemies for almost thirty years. That hasn’t stopped Owen Pierce from crushing on Maggie, and he’s determined to invest in her success. Now he has to convince her that he’s more than just trouble with a capital T… An offer that’s impossible to accept…

Maggie Sinclair has tried everything to save her family’s business, including mortgaging their beloved beach house on the Jersey shore. But now, she’s out of options.

The Sinclair and Pierce families have been neighbors and enemies for almost thirty years. That hasn’t stopped Owen Pierce from crushing on Maggie, and he’s determined to invest in her success. Now he has to convince her that he’s more than just trouble with a capital T…

Tracy Parker was in love with being in love.

That worried her best friend and maid of honor, Maggie Sinclair, more than she cared to admit.

In the middle of the temporary dance floor, Tracy waltzed with her new husband in a satin-and-lace designer gown, gleaming with seed pearls and twinkling sequins. But the sparkle dimmed in comparison to the dreamy glow in Tracy’s eyes.

The sounds of wedding music competed with the gentle rustle of seagrass in the dunes and the crash of the waves down on the beach. The fragrance from centerpiece flowers and bouquets battled with the kiss of fresh sea air.

Connie and Emma, Tracy’s two other best friends and members of the bridal party, were standing beside Maggie on the edge of the dance floor that had been set up on the great lawn of Maggie’s family’s beachfront mansion on the Jersey Shore. Huddled together, Maggie and her friends watched the happy couple do a final whirl.

“She’s got it so bad,” Maggie said, eyeing Connie and Emma with concern past the rim of her rapidly dis- appearing glass of champagne.

“Do you think that this time he really is The One?” Connie asked.

“Doubt it,” Emma replied without hesitation.

As the DJ requested that other couples join the happy newlyweds, Maggie and her friends returned to the bridal party dais set out on the patio. Grabbing another glass of champagne, Maggie craned her neck around the gigantic centerpiece piled with an almost obscene mound of white roses, ice-blue hydrangea, lisianthus, sheer tulle, and twinkling fairy lights and examined the assorted guests mingling around the great lawn and down by the boardwalk leading to the beach.

She recognized Tracy’s family from their various meetings over the years, as well as some of Tracy’s sorority sisters, like Toni Van Houten, who in the six years since graduation had managed to pop out a trio of boys who now circled her like sharks around a swim- mer. Although the wedding invite had indicated No Children, Toni had done as she pleased. Since Tracy had not wanted a scene at her dream beachfront wed- ding, Emma, who was doing double duty as the wedding planner for the event, had scrambled to find space for the children at the dinner tables.

“Is that Toni ‘I’ll never ruin my body with babies’ Toni?” Connie asked, a perplexed look on her features. At Maggie’s nod, Connie’s eyes widened in surprise, and she said, “She looks…happy.”

A cynical laugh erupted from Emma. “She looks crazed.”

Maggie couldn’t argue with either of their assessments. But as put-upon as their old acquaintance seemed, the indulgent smile she gave her youngest child was positively radiant.

Maggie skipped her gaze across the gathering to take note of all the other married folk. It was easy enough to pick them out from her vantage point on the dais, where she and her friends sat on display like days’ old cakes in the bakery. They were the last three unmarried women in an extended circle of business and college acquaintances.

“How many times do you suppose we’ve been bridesmaids now?” Maggie wondered aloud. She finished off her glass and motioned for the waiter to bring another.

“Jointly or severally?” asked Connie, ever the lawyer. “Way too many,” replied Emma, who, for a wedding planner, was the most ardent disbeliever in the possibility of happily ever afters.

Maggie hadn’t given marriage a first thought, much less a second, in a very long time. She’d had too many things going on in her life. Not that there hadn’t been a few memorable moments, most of which revolved around the absolutely worst man for her: Owen Pierce.

But for years now, she’d been dealing with her family’s business and its money problems, which had spilled over into her personal finances. As she gazed at the beauty of the manicured grounds and then back toward her family’s summer home, it occurred to her that this might be the last time she hosted a celebration like this here. She had mortgaged the property that she had inherited to funnel money into the family’s struggling retail store division.

Unfortunately, thanks to her father’s stubborn refusal to make changes to help the business, she spent way too much time at work, which left little time for romance. Not to mention that none of her casual dates had piqued her interest in that direction. Looking down from her perch, however, and seeing the happiness on so many faces suddenly had her reconsidering the merits of married life.

“Always a bridesmaid and never a bride,” she muttered, surprising herself with the hint of wistfulness in her tone.

“That’s because the three of us are all too busy working to search for Prince Charming,” Connie said, her defense as swift and impassioned as if she were arguing a case in court.

“Who even believes in that fairy-tale crap?” Emma’s gaze grew distracted, and she rose from her chair. “Excuse me for a moment. Carlo needs to see me about something.”

Emma rushed off to the side of the dance floor, where her caterer extraordinaire, Carlo Teixeira, raked a hand through his thick, brown hair in clear frustration. He wore a pristine white chef’s jacket and pants that enhanced his dark good looks.

Emma laid a hand on Carlo’s forearm and leaned close to speak to him, apparently trying to resolve a problem.

“She doesn’t believe in fairy tales, but her Prince Charming is standing right in front of her,” Connie said with a sad shake of her head.

Maggie took another sip of her champagne and viewed the interaction between Carlo and Emma. Definitely major sparkage going on, she thought.

“You’re totally right,” she said with an assertive nod. Connie smiled like the proverbial cat, her exotic green-gold eyes gleaming with mischief. “That’s why you hired me to represent your company as soon as I finished law school. Nothing gets past me.”

“Really? So what else do you think you’ve seen tonight?”

Raising her glass, her friend gestured toward the right of the mansion’s great lawn, where some of the frater- nity brothers from their alma mater had gathered. One of the men slowly turned to sneak a peek at them.

“Owen has been watching you all night long,” Connie said with a shrewd smile.

“Totally impossible, and you of all people should know it. Owen Pierce has absolutely no interest in me.” She set her glass on the table to hide the nervous tremble of her hand as her gaze connected with his for the briefest of moments. Even that fleeting link was enough to raise her core temperature a few degrees. But what woman wouldn’t respond like that?

In his designer tuxedo, Owen was the epitome of male perfection—raven-black hair, a sexy gleam in his charcoal-gray eyes, broad shoulders, and not an ounce of fat on him, which made her recall seeing him in much, much less on a hot summer night on Sea Kiss Beach. She had been staying in the quaint seaside town on the Jersey Shore with her grandmother that summer, much as she had all her life. As they also had for so many years, the Pierce boys had been residing next door for the entire season.

The two beachfront mansions had been built side by side decades earlier, before the start of the Pierce and Sinclair rift. The cost of waterfront real estate had esca- lated so drastically since their construction that neither family was willing to sell their beloved home to put some distance between the warring clans.

Well, make that the warring fathers, because as far as Maggie was concerned, she had no beef with Owen.

One Response to Caridad Pineiro’s ONE SUMMER NIGHT