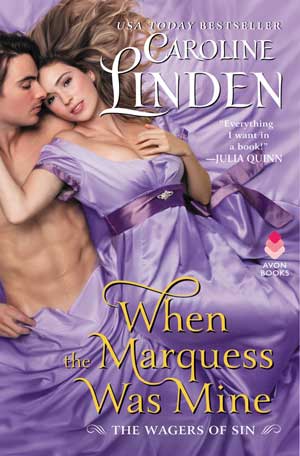 From Caroline Linden, WHEN THE MARQUESS WAS MINE.

Georgiana Lucas despises the arrogant and cruel Marquess of Westmorland even before learning that he’s won the deed to her friend Kitty’s home in a card game. Still, Georgiana assures Kitty the marquess wouldn’t possibly come all the way to Derbyshire to throw them out—until he shows up, bloody and unconscious. Fearing that Kitty would rather see him die, Georgiana blurts out that he’s her fiancé. She’ll nurse the hateful man back to health and make him vow to leave and never return. The man who wakes up, though, is nothing like the heartless rogue Georgiana thought she knew… In the game of love…

Georgiana Lucas despises the arrogant and cruel Marquess of Westmorland even before learning that he’s won the deed to her friend Kitty’s home in a card game. Still, Georgiana assures Kitty the marquess wouldn’t possibly come all the way to Derbyshire to throw them out—until he shows up, bloody and unconscious. Fearing that Kitty would rather see him die, Georgiana blurts out that he’s her fiancé. She’ll nurse the hateful man back to health and make him vow to leave and never return. The man who wakes up, though, is nothing like the heartless rogue Georgiana thought she knew…

You have to risk it all

He wakes up with no memory of being assaulted—or of who he is. The bewitching beauty tending him so devotedly calls him Rob and claims she’s his fiancée even as she avoids his touch. Though he can’t remember how he won her hand, he’s now determined to win her heart. But as his memory returns and the truth is revealed, Rob must decide if the game is up—or if he’ll take a chance on a love that defies all odds.

It was to be a bacchanal for the ages.

As Heathercote remarked, a man only turned twenty-nine once. Marlow pointed out that a man also only turned twenty-eight, or thirty, once as well, but they were well used to ignoring Marlow’s odd points of reason, and this one was promptly forgotten.

Heathercote planned the entire affair, inviting the most dashing, daring rogues and scoundrels in London. He declared it to be the invitation of the month, and that he’d turned away several fellows for lacking wit, style, or both. “You mean they aren’t up to your standard of mayhem,” said Westmorland, whose birthday it was, to which Heathercote mimed tipping his hat in acknowledgment.

After a raucous dinner at White’s, they decamped for the theater. The production was well under way when they invaded the pit in search of amusement. By the time the show ended, they had drunk a great deal of brandy, thrown oranges at the stage, and lost Clifton to the company of a prostitute.

Everyone’s memories ran a bit ragged after that, with vague recollections of singing in the streets and Marlow casting up his accounts somewhere in Westminster, but eventually they settled at the Vega Club. It was so late, the manager tried to dissuade them from play. Mr. Forbes knew every one of them could wager for hours, and the Vega Club closed its doors at dawn.

But Heathercote persuaded him to let them in and to give them the whist salon all to themselves. “We’ll leave by noon,” he promised, patting Forbes on the chest as he slid a handful of notes into the man’s hand. His words were remarkably steady for a man who’d been drinking for eight hours. Grim-faced, Forbes let them in, where they commandeered the main table and called for yet more wine.

A few intrepid souls followed them from the club proper. Forbes tried to stop them at the door, but Forester recognized one and waved them in. “We don’t mind winning their money,” he said with a hiccup.

They played whist, then switched to loo. One loser was dared to drink off the contents of his full flask in one go, which he did. The room filled with cigar smoke and ribald language, and the wagers grew extravagant. Marlow won a prize colt off Forester. Heathercote wagered his new phaeton and ended up with someone’s barouche. Sackville won the largest pot of the night, and everyone pelted him with markers.

And then one of the hangers-on spoiled it. He had the look of a country fellow new to London, with an arrogant bluster that was initially amusing but eventually turned annoying. He’d played well enough, winning a bit and losing with colorful curses that made the rest of them roar with laughter. But it became abruptly clear that Sir Charles Winston was in over his head when he wagered his house.

Marlow laughed. Heathercote picked up the scribbled note Winston had put forth and read it with one brow arched. “Can’t wager property, Winslow.”

The man was already ruddy from drink, and now he turned scarlet. “Can so! Your fellow wagered a horse.”

“Horses are portable,” said Forester, his Liverpool accent bleeding through. “Houses are not.”

“Houses are worth more!”

“Aye, too much more.” Heathercote flicked the note back across the table. “Markers.”

“I haven’t got any more markers,” muttered the younger man. For a moment everyone focused in surprised silence on the empty space in front of him. None of them had run out.

“Then fold your hand,” Forester told him. “You’re out!”

Winston’s chin set stubbornly. His mate tried to slide some markers toward him, but he angrily shoved them back. “Give me a chance to win it back.”

“All the more reason to walk away, if you’ve lost ‘em all.” Marlow waved one hand, nearly toppling out of his seat. Mr. Forbes, watching grimly from the corner, came forward. “Forbes, Windermere is done.”

“Not yet!” Winston scowled at them all, shaking off his friend’s quiet attempts to get him to fold. “Not now, Farley! They got a chance to turn their luck. Why shouldn’t I?”

“Luck is like the wind,” said a new voice. Nicholas Dashwood, the owner of the Vega Club, stepped out of the shadows. “It rarely turns propitiously.”

Heathercote slung his arms over the back of his chair. “Well, West? What say you? Shall we let him stay and wager away everything he’s got?”

Lounging in his seat, the Marquess of Westmorland looked up in irritation. “Really ought to go, Winsmore.”

Winston sat up straighter in his seat. “Please, my lord.”

The marquess lifted one shoulder. “Damned if I care.”

“Sir Charles,” said Dashwood evenly, “do not wager what you cannot afford to lose.”

Winston scooped up the scribbled paper and added a line, signing his name with a flourish. “I won’t, sir.”

But he did. Within four hands, he’d won a bit and then lost it all—including the deed. Suddenly he did not look so belligerent or so stubborn. He looked young and quite literally green, staring at the winning hand, lying on the table.

Winston puffed up furiously. “Should have known better than to play with the likes of you!”

“Di’n’t y’know that before you sa’ down?” Marlow’s words slurred together. “Stupid bloody fool!”

“And you risked it at loo!” Heath made a derisive noise. “Idiot.”

Winston was the color of beets. “Don’t call me that.”

Sackville raised one brow. “No? ’S not your home anymore.” He reached out and plucked the scrawled paper from the pile of markers and examined it, although his eyes never quite managed to focus on it. “It ‘pears to be West’s.”

His friends howled with laughter. “He doesn’t need it,” cried Winston. He made a convulsive grab for the paper before his lone remaining friend caught his arm. “He’s got a dozen houses!”

“Set it up as a brothel, West,” suggested Forester. “And give all your mates discounted fees.”

Winston drew a furious breath, but instead of continuing the fight he turned and rushed from the room, rather unsteadily; he wrestled with the door, and then almost tripped on his way out, causing more howls of laughter from the table. His friend helped him back onto his feet before the door closed on them both.

“Who invited him?” asked Heathercote in disdain.

“Ballocks,” mumbled Marlow, putting his head down on the table. “Never did. Was Forester.”

Forester made a rude gesture. “I vouched for the other man, Farley.”

“Your friends are all bad ton,” said Sackville.

Forester’s face tightened. He rose and swung his wineglass into the air in a toast, spilling some. “Thank you all for a most exciting evening, gentlemen.” Pointedly he bowed only to Viscount Heathercote and Lord Westmorland. Sackville repaid him with a rude gesture at Forester’s back.

Heathercote protested, but Forester waved him off and left. With Marlow asleep on the table and Sackville still giggling drunkenly to himself, Westmorland placed his hands on the table, hesitated as if gathering strength, then heaved himself to his feet. “The carriages, Dashwood.”

Stone-faced, the owner left. Westmorland surveyed the table. “Did I win the last?”

“Credit it all, Forbes,” said the marquess. “God above, I’m tired.”

As expressionless as his employer, the manager stepped forward. With an air of distaste, he picked up the deed promise and held it out. “I cannot credit this, my lord.”

West stared at it. “Damn. Right.” He stuffed it into the pocket of his jacket and staggered out into the morning sunlight with Heathercote, never guessing the trouble that wagered deed was about to cause him.