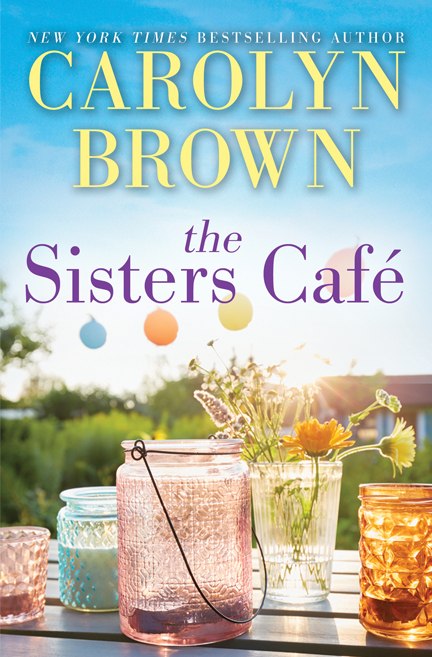 A double-header of Carolyn Brown books! Check out THE SISTERS CAFE and THE SHOP ON MAIN STREET

In The Sisters Cafe, Cathy is full of self-doubt. Both of her options—going through with the wedding or breaking off her engagement—are beginning to look like a nightmare either way. She knows her friends will back her up, but she’s the one who has to make a decision that’s going to tear her apart.

In The Shop on Main Street,Carlene is shocked. Her marriage is over, her life in a tailspin. She’s humiliated, upset and heartbroken, but it’s time to move on to the anger stage of grieving. Carlene finds that she has all she needs as the ladies of this small town rally around and teach her that revenge is a dish best served red-hot. Cathy Andrew’s biological clock has passed the ticking stage and is dangerously close to “blown plumb up.” Cathy wants it all: the husband, the baby, and a little house right there in Cadillac, Texas. She’s taken step one and gotten engaged to a reliable man, but she’s beginning to question their relationship. Does he really love her, or is she just arm candy for his political career? Why is her future mother-in-law getting increasingly hostile? Worse, why does he stand up for his mother when she says those awful things, instead of protecting her?

Cathy is full of self-doubt. Both of her options—going through with the wedding or breaking off her engagement—are beginning to look like a nightmare either way. She knows her friends will back her up, but she’s the one who has to make a decision that’s going to tear her apart.

(Previously published as The Blue-Ribbon Jalapeno Society Jubilee and What Happens in Texas.)

If Prissy Parnell hadn’t married Buster Jones and left Cadillac, Texas, for Pasadena, California, Marty wouldn’t have gotten the speeding ticket. It was all Prissy’s damn fault that Marty was in such a hurry to get to the Blue- Ribbon Jalapeño Society monthly meeting that night, so Prissy ought to have to shell out the almost two hundred dollars for that ticket.

They were already passing around the crystal bowl to take up the voting ballots when Marty slung open the door to Violet Prescott’s sunroom and yelled, “Don’t count ’em without my vote.”

Twenty faces turned to look at her and not a one of them, not even her twin sister, Cathy, was smiling. Hell’s bells, who had done pissed on their cucumber sandwiches before she got there, anyway? A person didn’t drop dead from lack of punctuality, did they?

One wall of the sunroom was glass and looked out over lush green lawns and flower gardens. The other three were covered with shadow boxes housing the blue ribbons that the members had won at the Texas State Fair for their jalapeño pepper entries. More than forty shadow boxes all reminding the members of their history and their responsibility for the upcoming year. Bless Cathy’s heart for doing her part. She had a little garden of jalapeños on the east side of the lawn and nurtured them like children. The newest shadow box held ribbons that she’d earned for the club with her pepper jelly and picante. It was the soil, or maybe she told them bedtime stories, but she, like her mamma and grandma, grew the hottest jalapeños in the state.

“It appears that Martha has decided to grace us with her pres-ence once again when it is time to vote for someone to take our dear Prissy’s place in the Blue- Ribbon Jalapeño Society. We really should amend our charter to state that a member has to attend more than one meeting every two years. You could appreciate the fact that we did amend it once to include you in the membership with your sister, who, by the way, has a spotless attendance record,” Violet said.

Violet, the queen of the club, as most of the members called it, was up near eighty years old, built like SpongeBob SquarePants, and had stovepipe jet- black hair right out of the bottle. Few people had the balls or the nerve to cross her, and those who did were put on her shit list right under Martha, aka Marty, Andrews’ name, which was always on the top.

Back in the beginning of the club days, before Marty was even born, the mayor’s wife held the top position on the shit list. When they’d formed the Blue- Ribbon Jalapeño Society, Loretta Massey and Violet almost went to war over the name of the new club. Loretta insisted that it be called a society, and Violet wanted it to be called a club. Belonging to a club just sounded so much fancier than saying that one belonged to a society. Loretta won when the vote came in, but Violet called it a club anyway and that’s what stuck. Rumor had it that Violet was instrumental in getting the mayor ousted just so they’d have to leave Grayson County and Loretta would have to quit the club. The Shop on Main Street

Carlene Lovelle, owner of Bless My Bloomers lingerie shop, has everything she’s ever wanted: a loving husband, a successful small town business, and great friends who never disappoint.

However, that all changes when Carlene finds a pair of sexy red panties in her husband’s briefcase.She knows exactly who those panties belong to—they were purchased from her very own shop.

Carlene is shocked. Her marriage is over, her life in a tailspin. She’s humiliated, upset and heartbroken, but it’s time to move on to the anger stage of grieving.

Carlene finds that she has all she needs as the ladies of this small town rally around and teach her that revenge is a dish best served red-hot.

(Previously published as The Red-Hot Chili Cook-Off and A Heap of Texas Trouble.)

Some men are just born stupid. Some don’t get infected until later in life, but they’ll all get a case of it sometime. It’s in their DNA and can’t be helped.

Carlene could testify with her right hand raised to God and the left on the Good Book that her husband, Lenny, had been born with the disease and it had worsened with the years. Proof was held between her thumb and forefinger like a dead rat in the form of a pair of bikini underwear. They damn sure didn’t belong to her. Hell’s bells, she couldn’t get one leg in those tiny little things. And they did not belong to Lenny, either. Even if he had become an overnight cross- dresser, his ass wouldn’t fit into that skimpy pair of under- britches, not even if he greased himself down with bacon drippings.

They were bright red with a sparkling sequin heart sewn on the triangular front. They’d come with a matching corset with garter straps and fishnet hose. Carlene recognized them, because she’d designed the outfit herself at her lingerie shop, Bless My Bloomers. They belonged to a petite, size- four brunette with big brown eyes who had giggled and pranced when she saw herself in the mirror wearing the getup.

Carlene jumped when her cell phone rang. The ring tone said it was Lenny, but she was still speechless, staring at the scrap of satin in her hand.

She dropped to her knees on the carpet and bent forward into a tight ball, her blond hair falling over her face. She felt as if someone had kicked her firmly in the gut and she couldn’t breathe. In a few seconds she managed a sitting position, wrapped her arms around her midsection, and sucked in air, but it burned her lungs. The noise that came forth from her chest sounded like a wounded animal caught in a trap. Tears would have washed some of the pain away but they wouldn’t flow from her burning green eyes. Finally, she got control of the dry heaves and managed to pull herself up out of the heap of despair. Dear God, what was she going to do?

The brunette who’d bought the red- satin outfit had told her that she and her sugar daddy were going to Vegas, and she wanted something that would make him so hot he’d be ready to buy her an engagement ring. What was her name? Bailey? Brenda? No, something French, because Carlene remembered asking her about it. Bridget…that was it! Bridget had been to Vegas with Lenny. On how many other trips had he taken a bimbo with him and how many of them had been ten or fifteen years younger— and a size four, for God’s sake?

In seconds, the phone rang again. She picked it up and said, “Hello.” Her voice sounded like it was coming from the bottom of a well or, maybe, a sewer pipe.

“Carlene, I left my briefcase in my office. I slept on the sofa to keep from waking you, since I got in so late last night. Bring it to me before you go to work, and hurry. There’s a contract in it that I need and the people will be here to sign in ten minutes. I’ll hold them off with coffee until you get here.”

No thank you, darlin’.

Not even a please.

Anger joined shock and pain as she dropped the panties back in the briefcase and then removed the little card she’d made for him to find that morning. She’d written that she was sorry she had fallen asleep before he got home and that she’d make it up to him that night with champagne and wild sex. She stood up, straightening to her full statuesque height of just a couple of inches under the six- foot mark. Damn that sorry bastard to hell. How could he do this to her?