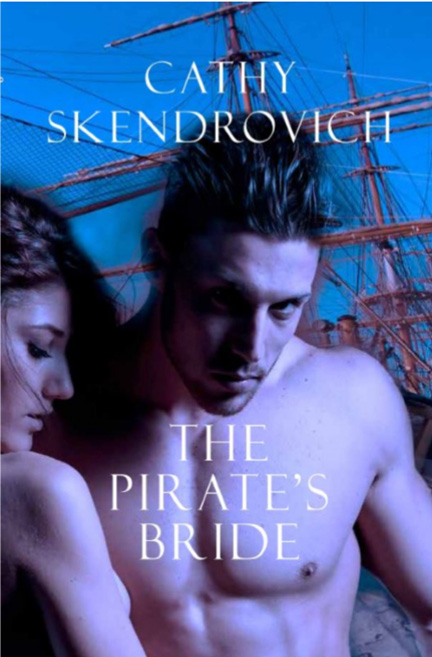 My Inspiration for Writing The Pirate’s Bride by Cathy Skendrovich

My Inspiration for Writing The Pirate’s Bride

About the same time as I joined that site, I also joined a writing prompt group. The prompts were fun, and I enjoyed giving and receiving comments about the various stories we produced from the weekly prompts. One day I received this prompt: “Revenge was a dish best served cold.” Immediately I could see a female pirate taking revenge on a male pirate who had done her wrong. The rest of the story came soon after.

So here is the scene with this infamous line, the line that started this story on its journey to publishing, and even to a Christmas themed sequel coming in the fall from Literary Wanderlust Publishing. I hope you enjoy it as much as I enjoyed writing it. Blurb for The Pirate’s Bride

All Sophie Bellard wants is her freedom, freedom to sail the seven seas, and freedom to be her own person without interference from a controlling husband. But an arranged marriage to handsome and dangerous Captain Andre Dubois derails all her hopes. After a disastrous wedding night where a ruinous secret is discovered, the two go their separate ways with hopes of never meeting again.

Sophie becomes a pirate while Andre sets off for the Orient, where he makes a murderous enemy. After escaping with his life, Andre returns to home waters, and in an unexpected twist of pirate fate, reunites with his estranged and unwilling wife.

When Andre’s murderous enemy threatens Sophie’s life, he vows to protect what is his, and attempts to win his wife’s forgiveness and love, once and for all.

It was on one such day, after successfully filling their hold to the gunwales with stolen swag, that the lookout hollered, “Sail ho!”

At the helm, Sophie glanced at Limey, who pulled out his spyglass to take a gander.

“Colors?” she queried, frowning when he didn’t answer, continuing to track the intruder through his glass. “Is it one of ours?” she prodded, and saw recognition bloom across his countenance. Recognition and dread.

Slowly he turned from his spyglass and replied, “The Jade Princess.”

Sophie Bellard Dubois believed in this credo with all her heart, especially when she’d been hand-delivered the opportunity this afternoon. After all, hadn’t Andre accused her of cuckolding him? Hadn’t he stormed away to parts unknown, disengaging himself from this area of the world? He bloody well should thank her for maintaining the status quo in his absence. She doubted the blackguard would see it her way.

“What’s the plan, Sophie? We can be out of here if we turn rudder now.”

“Hoist the colors and fire a warning shot over their bow, Limey,” she ordered without hesitation.

He stared, as if unable to believe she would even suggest the maneuver. “Are—are you sure, Ma’am?”

She looked down her nose at him. “Is that insubordination I detect, Limey?”

“Exactly. Carry out my orders, Limey.”

She returned to her spyglass, as Limey cried out, “Hoist the colors and ready starboard guns, you bilge rats.” He moved away to oversee the warning shot. She studied the approaching ship.

Of course, she shouldn’t fire on her own husband. She knew that, but the cad deserved it. He deserved to find out who had taken his place in his absence, who could not be cowed by his repudiation or curse words. Who was now a pirate in her own right.

By now, the Jade Princess had covered more distance but still it flew no colors. With her heartbeat pounding in excitement, Sophie checked with the gunner, received a nod of readiness. She nodded in return, the fuse was lit, and…

A round shot flew high and true over the Jade Princess. She got the supreme pleasure of watching the crew on the opposing deck hunch and duck, including the captain. Dubois spun about and locked eyes on her, glaring across the distance at this stranger firing upon him. She stifled a nervous giggle of anticipation.

Within minutes, the Phoenix laid stem to stern beside the Jade Princess, a wide plank stretching between them. Dubois paced his deck like a caged tiger, his face thundercloud dark. Her pulse quadrupled at the thought of their imminent confrontation. She squared her shoulders and marched across the board, one hand resting on the grip of her cutlass for courage.

“Who the bloody hell do you think you are, firing upon my ship and boarding me? Do you even know who I am?”

Andre advanced on Sophie and her crew, pulling up short when her men drew their weapons. His own crew made ready behind him, the clatter of swords and cutlasses unsheathing loud on the suddenly silent deck. On a swift inhale, she strode forward, parting her men as Moses did the Red Sea.

“Of course, I know who the bloody hell you are, Captain Dubois. I am also Captain Dubois, lately of the Sargasso Sea.” She halted in front of her husband. Andre’s nostrils flared, though his eyes widened as her words sank in. “Sophie? Sophie Bellard? What the devil are you doing here in that—that—get-up?” Shaking his head, he made to move forward, but once more, her crewmembers jabbed their blades at him. He pulled up short.

“It’s Sophie Bellard Dubois, or have you forgotten that little ceremony we both participated in nearly ten months ago?” She quivered at the memory of the long-ago humiliation.

It didn’t help that a quick once-over told her Andre Dubois was just as sinfully handsome as he’d been at the time of their marriage. Perhaps more so, with his long hair covered by a black bandana hanging down his back, kohl-lined, long-lashed, obsidian eyes snapping at her, and that slim but wiry body encased in fawn-colored, body-hugging breeches and open-necked shirt. Irritation simmered in the air between them as he looked down his nose at her men holding him off. She called them back reluctantly.

“Believe me, I have not forgotten that misbegotten night,” he drawled, allowing his gaze to rove over her, stopping at her breasts and hips before returning to her face. Her body heated as if he’d touched her. Not this time, you knave, Sophie thought. This time I’m in charge.

Swaggering forward, she crossed her arms with a slight curl of her lip. “Then I made a better impression on you than you did for me, Husband. You quite slipped my mind these past many months until you made the unfortunate decision to cross my path today.” His eyes narrowed even as the men surrounding them elbowed each other and guffawed.

Oh, yes, revenge was definitely a dish best served cold, and a double dose was heading his way. Cathy Skendrovich has always loved a good story, and spent her formative years scribbling what is now called Fan Fiction. The current heartthrob of the time featured heavily in all her stories. Unfortunately, once she went to college, her writing took the form of term papers.

Upon graduation, Cathy became a middle school English teacher. Along the way, she married her husband of now thirty-two years, had two sons, and moved to southern Orange County, California. She chose to work part-time in the school system there.

She eventually joined the online writing site, Wattpad, and won a 2012 Watty Award for The Pirate’s Bride. She is now a featured author on that site, and credits her Wattpad follows for encouraging her to become a published author. Her published books, Prisoner of Love and The Pirate’s Bride, both debuted there.

The sequel to The Pirate’s Bride, a novella entitled A Pirate’s Bride Christmas, will be published later this year by Literary Wanderlust, while her next contemporary romantic suspense, Protecting the Nanny, will come out sometime in 2018, from Entangled Publishing.