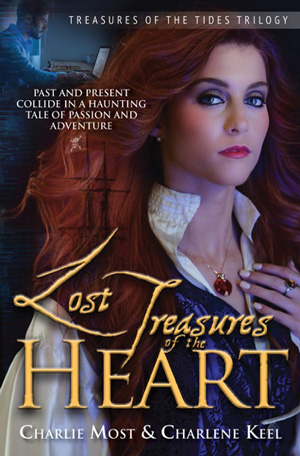 Q&A with LOST TREASURES OF THE HEART authors Charlene Keel & Charlie Most.

In LOST TREASURES OF THE HEART, architect Jonathan West is on a big project when he learns his wife has been unfaithful. On a fishing trip in North Carolina’s Outer Banks, he’s wondering what to do about his marriage when he sees a ghost ship. On it is a spectral woman, gazing at him with a plea in her eyes…

Q&A with Charlie Most & Charlene Keel, authors of
LOST TREASURES OF THE HEART

Both: Lost Treasures of the Heart is a blended genre romance that combines contemporary and historical with the paranormal. It’s the first in a trilogy.

Charlie Most: Honestly, the thought never occurred to me. I wanted to write a short piece for a girl I was seeing and then a circumstance took place—one I could not ignore. I had a ghost ship sighting. While on a fishing trip with friends, we saw an old square-rigged sailing vessel like the ones pirates used centuries ago. I decided then to turn it into a story. A love that spans the ages, unlike any other story ever told.

Charlene Keel: I’ve wanted to be a writer since I was in third grade. That’s when I read Little Women. It was the first time I made the connection that someone could write a story down on paper and it could eventually become a book others would want to read.

Charlie: My co-author. Char told me from the beginning of our partnership, “Stick to the storyline. Be careful how you introduce your characters to the reader.”

Char: When I first started submitting short stories to magazines (back in the day when top periodicals like McCall’s and Redbook published short stories), I would get encouraging notes scribbled on the bottom of rejection slips. Things like, “Not for us, but keep trying. You’ve got talent.” That kept me going for years before I made a sale. But I guess the best advice I’ve had was from reading Stephen King’s On Writing: A Memoir of the Craft. Basically, it was that to be a good writer you have to be able to spin a good yarn. And when it comes to adjectives, less is more.

Charlie: The doctors who tirelessly give their lives to search for a cure for cancer. Especially those who treat children and give them a chance at life.

Char: My favorite type of hero in a romance novel is the tarnished tough guy who keeps his feelings to himself, not because he doesn’t have any but because he doesn’t want them to be trampled. But once the heroine cracks the shell, he’s there for her, in every way. In Lost Treasures of the Heart, we have two heroes. Jonathan, in 2016, is a successful, stoic architect who’s been left devastated by his wife’s affair, and Girard Fournier, AKA the Falcon, is a debonair, swashbuckling pirate in 1717.

Charlie: I’ve been making my own wine and beer for the past eight years. I call the beer Crazy Charlie’s Pirate Grog, and the wine is Iron Pyrate. My favorite wine I made was a Spanish Tempranillo.

Char: As a freelance editor and ghostwriter I’m always on deadline, so I don’t have time for hobbies. When I do, it’ll be reading, working in my garden, and exploring some of Florida’s strangest places, like Cassadaga, a town full of spiritualists and ghostly encounters.

Charlie: Writing Lost Treasures of the Heart with Char and finally holding a physical copy of the book in my hand. We’re in the planning stages for the second book in the trilogy.

Char: It’s hard to choose—I’ve had so many. My most memorable experience as a writer was having Ricardo Montalban protect one of my scripts from unnecessary changes. Paul Vanase and I created the story for the Candy Kisses episode of Fantasy Island, and I wrote the screenplay. The thing you have to know about writing for TV is that the producer or head writer will always want to rewrite your script because, according to Writer’s Guild rules, if they can change thirty percent of it, they get to share credit and residuals.

With Candy Kisses, then producer Don Ingalls could find only one line to change, and it was something Mr. Roarke would never say. At the time I wrote the episode, I was also the Columbia Pictures publicist assigned to the show, so I got to hang out on the set during the shooting. I was trying to take comfort in that when Ricardo came to me and thanked me for writing such a beautiful script. When I expressed my concern about the line change, he asked me, “What did you write?”

When I told him, he said, “That’s perfect. I’ll go to the producers and have them change it back.” And he did. And they did. It’s probably the only script in television history that aired as the writer wrote it, without a single word changed.

Charlie: The Lost City of Atlantis, because I want to solve the mystery.

Char: Hawaii, for a nice, long vacation where I would do absolutely nothing except enjoy the luxury of a five-star hotel and have people wait on me. Because . . . just because!

Charlie: I love just basic and simple foods. I guess you could say I’m the original steak-and-potatoes kind of guy.

Char: I like to try new things, and I’ve invented a couple of recipes my family are all crazy about. Loose Meat Cheesburgers was inspired by Roseanne, one of my favorite TV shows (I still watch reruns). Saucesquatch is a hearty dish of mild Italian sausage, zucchini and pasta, so named because I love the idea of Bigfoot and I think it’s something he might like (if he’s not a vegetarian).

Charlie: Temperature control when it gets cold outside. Also our choices of transportation available today.

Char: I think the flushable toilet and the modern sewer system are the best conveniences in the world. I mean, where would we be without them?

Charlie: Spending an evening with someone you know needs a caring and understanding voice to get them through life’s issues.

Char: Spending an evening with someone who will treat me to a fabulous meal in a great restaurant, and then take me home and rub my feet.

Charlie: Most consider me very generous, kind and supportive with lots of patience. Others know not to cross me as I have a tendency to not let troubling matters go.

Char: An Eggo Thick & Fluffy waffle with a smear of Peter Pan peanut butter and a bit of Polaner’s All-Fruit apricot jam.

Charlie: Summer. All the greenery and the hot temperatures.

Char: In Florida, fall and winter, when we get some relief from the heat and humidity. In New York, spring (before the heat of summer hits) and autumn (before the bitter cold).

Charlie: I’m outlining the second book in the Treasures of the Tides trilogy which will tell readers more about Jonathan, the main character. It will go into more detail about the paranormal experiences he had as an adolescent.

Char: I’m putting the final touches on a new book, Grinders Corner, which is the hilarious true story of three women who, in the late 1960s and early 1970s, worked in a taxi dance hall.

Charlie: I’ll be doing some book signings in and around Baltimore, my home town, or in the Annapolis area near the Chesapeake Bay. I would love to have readers visit my Facebook page: https://www.facebook.com/LostTreasuresOfTheHeart/?fref=ts and my website: http://losttreasuresoftheheart.com/

Thanks again for blogging with us! Tea or coffee: Eight O’Clock French Roast coffee in the morning and Lipton’s Instant Iced Tea (the unsweetened version) in the afternoon.
Vanilla or chocolate: Vanilla
Early bird or night owl: Early Bird
Boxers or briefs (readers want to know!): Boxers
Favorite holiday: New Year’s Day (when I’m inspired anew with hope)
Favorite season: Autumn and winter
Cat or dog: Both. I have two of each.
Favorite color: At the moment, cherry red—but it changes, depending on my mood. Lost Treasures of the Heart
by Charlie Most & Charlene Keel

Architect Jonathan West is on a big project when he learns his wife has been unfaithful. On a fishing trip in North Carolina’s Outer Banks, he’s wondering what to do about his marriage when he sees a ghost ship. On it is a spectral woman, gazing at him with a plea in her eyes.

Jonathan buys a house on the beach near the sighting and finds an old sea chest washed up there. Its contents, including a miniature portrait, reveal that it belonged to Kate Russell, captain of the Royal Thomas, which sank in 1721.

It’s the same woman Jonathan saw on the ghost ship, and her journal describes in her own words a life of piracy and sweeping romance. As past and present collide, he starts seeing her everywhere, waking and sleeping. With a haunting desperation, he senses she wants something from him. If he can figure it out and find a way to help her, he believes her spirit will finally rest.

10 Responses to Charlene Keel & Charlie Most Q&A: LOST TREASURES OF THE HEART