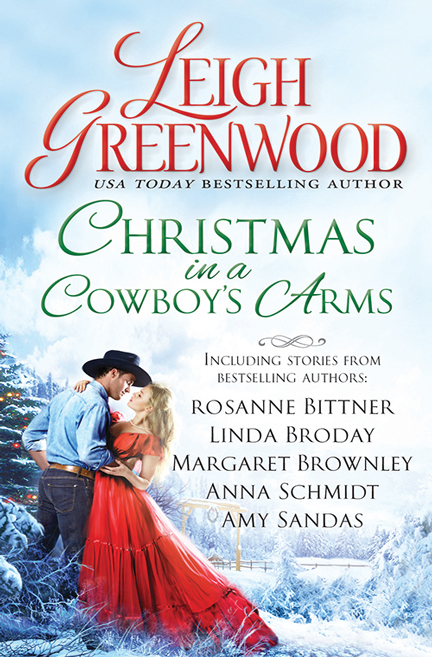 In the wild and untamed West, it takes a cowboy’s embrace to see you through a long winter’s night. Stay toasty this holiday season with heart-warming tales from bestselling authors Leigh Greenwood, Rosanne Bittner, Linda Broday, Margaret Brownley, Anna Schmidt, and Amy Sandas Title: Christmas in a Cowboy’s Arms

The Beating Heart of Christmas

Whether it’s a lonely spinster finding passion at last…an infamous outlaw-turned-lawman reaffirming the love that keeps him whole…a lost and broken drifter discovering family in unlikely places…a Texas Ranger risking it all for one remarkable woman…two lovers bringing together a family ripped apart by prejudice…or reunited lovers given a second chance to correct past mistakes…a Christmas spent in a cowboy’s arms is full of hope, laughter, and—most of all—love.

From “Father Christmas” by Leigh Greenwood

“If you’re going to shoot me, get on your feet first.  I’d hate to have it known I was killed by a woman so weak she couldn’t stand up.”

“I can stand up,” Mary insisted.  To prove her point, she threw back the covers and started to get to her feet.  Immediately she felt faint.

Joe caught her before she fell.

“I never met such a foolish woman in my life.  Stay in that bed, or I’ll tie you down.  You can shoot me when you feel better.  Meantime, you’d better give me this.”  He took the pistol from her slackened grasp.  “Next thing you know, you’ll drop it and put a hole through the chicken pot.  I’m not chasing down another rooster.”

Mary started to laugh.  The whole situation was too absurd.  Nothing like this happened to ordinary people.  She was ordinary, so it shouldn’t be happening to her.

She certainly shouldn’t be experiencing this odd feeling.  It almost felt as if she wanted to cry.  But she didn’t feel sad.  She felt bemused and bewildered.  Her brain was numb.  Here she was, completely helpless, and she had tried to shoot the only human who had come along to help her.

She must be losing her mind.

From “A Chick-a-Dee Christmas” by Rosanne Bittner

“Sadie Mae!”  Jake screamed her name as he made it around the other side of the small hill.  He couldn’t see or hear her.  All he saw was Tommy curled up on his knees against one of the boulders, a cougar clawing at his shoulder.

Jesus, where is Sadie Mae!  Jake had to kill the cougar, but the bullet could go right through into Tommy or even into Sadie Mae.  He could kill both of them!

“Grampa!  Grampa!” he heard someone screaming behind him.

The boys must be watching.  “Don’t shoot!” Jake ordered them.

It all happened in a matter of perhaps three seconds.  Jake knew he had no choice.  He cocked and raised his 30-30 Winchester.  A six-gun might not do the job … but the risk!  The risk!  The big cat was moving violently over Tommy.  Sadie Mae must be under him!  One of the other kids could be next!  He aimed … and prayed … and fired … cocked the rifle again … fired again.

From “The Christmas Stranger” by Linda Broday

Hank slowly tugged the long silk ribbon from around her neck, trailing the red fabric down one arm. He leaned closer. “There’s some mistletoe right over your head. I hope I’m not pressing my luck, but do you mind if I kiss you again?”

A happy, warm glow swept over her. “I don’t see anyone trying to fight you,” she whispered.

He pulled her up into his arms and drew the ribbon around her, tethering her to him. Sidalee had never felt more alive, more breathless, more…hot.

She tilted her face to him, feeling the wild beat of his heart that matched hers. He gently anchored her against the hard wall of his chest. The moment his lips touched hers, an aching hunger swept through her, turning her knees to pudding.

The yearning for him was so strong she clutched him to keep from falling in a puddle at his feet. One arm curled around his neck just under his hair. The strands brushed her skin like tiny feathers.

That’s when she knew she was falling in love with Hank Destry.

From “A Texas Ranger for Christmas” by Margaret Brownley

The question hung between them, the air taut with tension. At least he didn’t say love. Had he said he loved her, she would have been a goner for sure.

“No. No chance,” she said. Bad news was best delivered quickly and with as few words as possible.

He looked like she had hit him. “After last night I thought…”

“You thought wrong,” she snapped. Afraid of losing control, she curled her hands tight by her side. “All that fancy talk about retirin’ is just that—talk. You’ll always be a Texas Ranger. You won’t be able to help yourself. Rangers don’t make very good husbands. Don’t make good fathers, either.”

“I told you I planned on quitting and I meant it.”

She heaved a sigh. “Richard told me the same thing, and he’d lasted here at the farm three months. Three lousy months!”

“No, but you’re one of them. Just like Richard and my pa. Pa promised to quit, too. But there was always another outlaw to chase. Another call to adventure.”

As a child she couldn’t compete with the lure of the rangers. But neither had she been able to compete as a grown woman.

Cole’s burning eyes held hers. “I’ll always be there for you,” he said, “And that’s a promise.”

For several moments the only sound was Adam banging on the table with his spoon.

“Sadie,” he said at last, his voice thick with emotion. “How can I prove that I mean what I say? What will it take?” His tender eyes met hers. “How can I make you believe that I will never leave you?”

“You can’t,” she whispered. It near broke her heart to say it, but it was better to lose him before the first stirrings of love turned into something deeper. As hard as it was now, it would be so much harder, later. “You can’t.”

From “A Christmas Baby” by Anna Schmidt

Louisa Johnson was late slipping out of the house, but she knew Rico would be there waiting. She had come to a decision and she would not be denied, not even by her father—a man she had adored her entire life, but one who now stood in the way of her being with Rico. She had no idea how to make things right with her father. What she knew with more certainty than she had ever known anything in her nineteen years was that she loved Rico Mendez and he was devoted to her. If her father couldn’t accept that—couldn’t look past their differences and see Rico for the kind, hard-working man he was—then she would have to force his hand.

From “A Christmas Reunion” by Amy Sandas

Her voice hit him like a blow straight to his sternum. Warren took an instinctive step back. Old memories sliced through him like the sharp edge of a scalpel against raw flesh.

They were hundreds of miles from where he had last seen Honey Prentice in Montana. That distance was the only thing that had made it possible for him to come back out West. He had assured himself there was no chance he’d accidentally run into the woman who had torn his heart from his chest all those years ago.

But her gasp as she stepped out into the room told him he’d been wrong.

She was as beautiful as she had been as a girl of seventeen.

And she was not happy to see him.

She crossed the room with long, swift strides that had her cotton skirts whipping about her legs. In an easy movement, she pulled the bearded outlaw’s gun from his belt before he knew what she was about and then turned the weapon on Warren.

Fire flashed in her brown eyes as she held the gun steady with two hands. “What the hell are you doing here, Warren Reed?”

Connect with the authors online

Enter to win a bundle of books from each of the authors in this anthology!