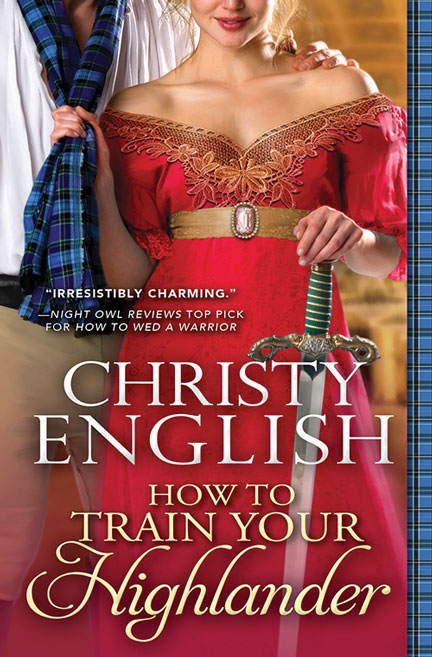 How to Train Your Highlander by Christy English is pure fun!

Wild Highlander Mary Elizabeth Waters is living on borrowed time. She’s managed to dodge the marriage banns up to now, but even Englishmen can only be put off for so long…and there’s one in particular who has her in his sights. Title: How to Train Your Highlander

She’s the Hellion of Hyde Park…

A foolproof plan to avoid marriage:

Wild Highlander Mary Elizabeth Waters is living on borrowed time. She’s managed to dodge the marriage banns up to now, but even Englishmen can only be put off for so long…and there’s one in particular who has her in his sights.

Harold Percy, Duke of Northumberland, is enchanted by the beautiful hellion who outrides every man on his estate and dances Scottish reels while the ton looks on in horror. The more he sees Mary, the more he knows he has to have her, tradition and good sense be damned. But what’s a powerful man to do when the Highland spitfire of his dreams has no desire to be tamed…

Harry had just begun to find his rhythm as he dug up the parterre rosebushes so that Simmons might plant them along the east-facing wall when he heard a thump and a curse that belonged on the docks or perhaps on one of his ships at sea.

“Damn and blast it!” the girl said again. “Now I’ve ruined another gown, and Ma won’t give me an allowance for any more.”

He looked up then from his work, knowing what he would find, for it seemed he knew the girl’s sultry voice already.

His siren from the carriage an hour earlier had wandered back into his domain, and had fallen in one of the holes left by the vacated rosebushes, her pink traveling gown covered in a long streak of ochre. He sighed, the last vestige of his peace falling away like the last bit of an orange peel. He watched it go, then turned to the lady, expecting tears at the very least, followed by sniffling and the need for his filthy handkerchief.

He wondered for one benighted moment if the girl had heard from the staff that the Recluse Duke was in the garden and, as a result, had come hunting him. His flesh began to cool, both from horror and from the sea wind touching the sweat on his shoulders. He wished for his waistcoat, which he had abandoned somewhere in the stables hours before, just as he wished for his friend Clyde to appear and occupy this woman with charm while Harry affected his escape.

Harry reminded himself that he was a gentleman and reluctantly started to help the girl out of her hole, when she straightened her skirt and leaped out of it on her own, apparently unscathed.

“Are you the blighter who left this gaping chasm so close to the path?” she asked.

Harry blinked and nodded. “I am.”

She seemed to want to say more, but perhaps she was remembering that she was a lady, for she drew a breath and let it out on one long exhale. “Well,” she said. “And this is what comes of letting a stable boy get into the garden. Hand me that shovel there, and be quick about it, before your head gardener sees this mess.”

He blinked and obeyed, and then watched as she filled the hole in the space of five minutes, layering the soil loosely so that it might breathe, then packing down the top with a flourish. She found the bag of crushed seashells bleached white sitting close by, and she covered the hole with a liberal amount of those, so that the next person who happened by might not trip as she had done.

Until he stood by and watched a beautiful woman fill a hole in the garden, the skirt of her gown pulled tight over a delightfully rounded behind as she worked, Harry would have said that he was a civilized man. Something was clearly wrong with him, for he had not fled, nor had he offered to assist her.

“I ought to have helped,” he said as she finished.

She leaned on her shovel and surveyed her work with what he could only assume was pleasure. His siren tipped her head back and took in the slanting rays of the afternoon sun on her skin. The summer days were long in the North, but the sun was cool. She seemed to drink it in like mead, before she turned her smile on him.

“And ruin a fine job?” she said. “I think not. You’re better off with the horses. Has his Royal Grace the Duke too few men to work for him, that a decent man of horses finds himself shifting among the flowers, then?”

Harry had never heard himself referred to in such a blasé yet disrespectful manner. He felt a frisson of irritation. He thought of revealing himself to this girl then and there.

But her curls were falling from their pins in a delightful disarray, catching the light of the sun with hints of honey brown and gold buried in them. She had the coloring his mother once had, when he was still a boy in short pants.

Instead, he turned to the girl and offered her his arm.

“God forbid! I just escaped from there.”

“I am told the house is very fine,” he said, feeling slightly miffed.

She laughed at him. Her laughter was warm and sultry, as her voice was, but completely free, as if she were a courtesan who had been born into the wrong life. His siren did not seem to notice that he had not spoken again, nor did she seem to care for anything he might have said. She stopped laughing at last and handed the shovel to Simmons, who had appeared out of the bushes at the sound of her mirth.

“I’m off to find the sea, but I thank you.” She nodded to Simmons, who bowed to her. She frowned to see him do it, a bit of darkness coming into the maple brown of her eyes. But she rallied at once, so quickly that Harry was not certain he had seen the shadow at all.

“Try not to fall in a ditch on your way back to the stables.”

She sauntered off then, her rounded derriere swaying. Harry stood staring after her like a fool, not even offering her a farewell. He felt the eyes of his man heavy on him, and Harry shrugged to Simmons before he took off after her.

Ever since Christy English picked up a fake sword in stage combat class at the age of fourteen, she has lived vicariously through the sword-wielding women of her imagination. A banker by day and a writer by night, she loves to eat chocolate, drink too many soft drinks, and walk the mountain trails of her home in North Carolina.