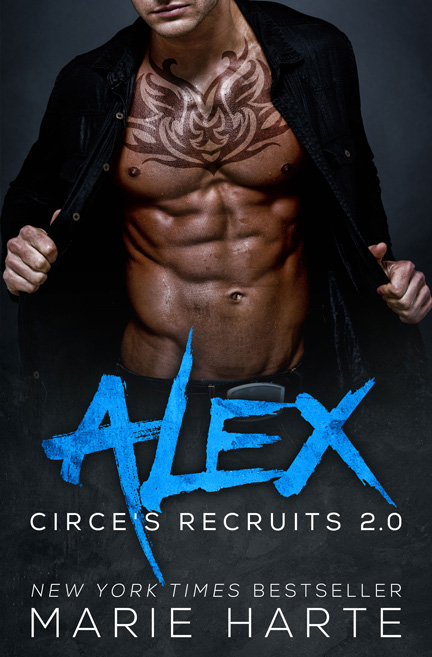 Alex never asked to be made into a monster. He tried to help his sister right a wrong, and in the process he lost her and his humanity. Angry, hurt, and doing his best to adapt to his new “pack” family, he accepts that life will never be the same. He’s even found patches of happiness in a new sense of belonging. But until he gets vengeance for Katie’s death, he can’t find peace…

Alex never asked to be made into a monster. He tried to help his sister right a wrong, and in the process he lost her and his humanity. Angry, hurt, and doing his best to adapt to his new “pack” family, he accepts that life will never be the same. He’s even found patches of happiness in a new sense of belonging. But until he gets vengeance for Katie’s death, he can’t find peace.

Saving a group of kidnapped psychics with ties to his sister is a step in the right direction. Even better, one particular beauty promises to lead him to the enemy he’s been seeking. But will the price of his revenge come at the cost of the woman, and the family, he’s come to love?

Warning: This book contains sexual content readers may find fascinating: group play, m/m/m, m/f, m+/f and more. Expect government conspiracies, underground fighters, genetic experiments, and Shifters unlike the kind you think you know. This book is not for the faint of heart. Enjoy!

She stood under the hot water until she pruned. Then she turned it off and dried herself. She stared at her dirty clothes in dismay, not wanting to put them back on. But she had nothing else to wear.

Kennedy cracked the door open and peered out. Alex’s partner remained asleep, but Alex paced around the room like an angry lion.

He stopped, his eyes still shining with a preternatural brightness, and speared her with his gaze. “You okay?”

She tugged the towel tighter against her, fighting a blush despite hiding everything but her face behind the door. “I just… The water felt good. Sorry for taking so long.” She hadn’t felt safe enough to take a long shower in months. Not when being naked meant being even more vulnerable in a place where she couldn’t afford to show weakness. “Um, do you have a shirt or anything I could borrow? I hate to put my dirty clothes back on.”

His eyes narrowed, and his nostrils flared…scenting her? He stepped closer, and though she knew she left little but a sliver of her face to be seen, she felt almost naked under his regard.

“We didn’t come prepared either. You can have my shirt if you want.”

Before she could tell him no, that she’d put her own clothes back on, he whipped off his T-shirt.

Treated to a firm, tanned chest, one devoid of body hair, she prayed she didn’t look as if she was ogling him as hard as she was. Good Lord, Alex Palmer was fine. The definition in his muscles could be attributed to being Circ, but she had a feeling he’d been in shape before being changed.

The fiery need that she’d washed away returned, stronger than ever. He held out his shirt, and she had to pull the door back to take it. Wearing nothing but a towel wrapped around her, she knew she shouldn’t get too close. For all that Alex seemed like a good guy, was Katie’s brother, and a man Dr. Lang had only ever mentioned with anger, she didn’t know him. And she didn’t know what might happen if she tried to listen in on his thoughts. What if he too had some kind of psychic ability? Oh God. What if he could read her thoughts as well?

She took a step outside the bathroom. Her beast disagreed that she didn’t know him. It must have communicated itself to Alex, because she saw the creature inside him staring at her through his eyes. Oh yeah. Definitely a Circ.

She wanted to pounce on him, take him down and do whatever she wanted with the male in his prime. Nearly panting, she strained to ease back her desire, hoping he couldn’t smell it on her.

Kennedy tried to focus on something else. The TV, the ugly plaid bedspread, his freaking partner lying on the bed just a few steps away…

Then Alex took her hand and put his shirt in it.

The feel of his warm skin was like a drug. She clenched the shirt tight, and the scent of him wafted to her all over again. “This thing inside me. My beast.” She licked her dry lips, saw him follow the movement with laser-like attention, and let the heat move through her. “I’ve heard the others talking about it. The men seem to deal with a lot of violence.”

“Yes.” He stepped closer, so that she had to tilt her head back to see him. Only a few inches separated them, and it was too much.

Her nipples grew harder, the towel an abrasive barrier against the pleasure she needed. The desire to be taken, ridden, and owned, consumed her. She didn’t like her emotions so out-of-control and tried to rein them in. But she feared she was too late.

“You’re wet.” He traced a droplet of water from her collarbone to the V between her breasts. “Need help drying off?”

She inhaled his sweet need and trembled. Wet? You have no idea.

“Kennedy?” His low, raspy voice sent shivers down her spine.

“Yes?” Her embarrassment took a backseat to desire. She nudged his fingers aside and let her towel drop. The sudden silence in the room was deafening.

Alex’s eyes widened, and he stepped back to look his fill. Then, before she could change her mind—as if her beast would let her—he put his large hands on her waist and yanked her flush against him.

To win an ebook copy of Circe’s Recruits 2.0: Gideon, leave a comment on the blog! What’s your favorite characteristic of a shapeshifter?